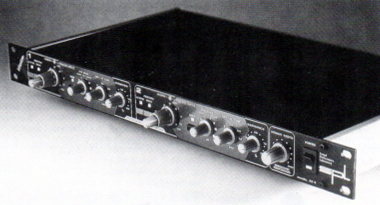 This month's Test Drive features a box from a company you don't hear a lot about. Sound Performance Laboratory, or SPL, is based in Niederkruchten, Germany, and their Vitalizer Psychoacoustic Equalizer offers an approach to equalization that's both unique and effective.

It is the Vitalizer's "psychoacoustic" approach to equalization that makes the unit different from conventional equalizers. While parametric and graphic equalizers process the audio in a linear fashion, the Vitalizer takes into consideration the non-linear way we hear audio. These principles of psychoacoustics are applied to a system of variable, interactive filters and phase shifters which are controlled by a microprocessor that constantly analyzes the input signal. As a result, the front panel of this equalizer doesn't have a row of EQ boost/cut controls for various bands of the spectrum. Instead, processing of the audio spectrum is brought to the front panel via three main controls: the Sub-Base control, the Mid-Hi Tune control, and the Harmonics control.

The Vitalizer is a stereo processor with two independent channels and separate controls for each channel with the exception of one control, the Stereo Width control next to the power switch at the far right of the front panel. This is the only control for the unit's "Surround Processor." Don't confuse this with the more familiar Dolby Surround system. The Vitalizer's surround system merely enhances the stereo "image" using inter-channel phase cancellation principles. The result is a control that "psychoacoustically" widens the stereo image. The more you turn it clockwise, the more effect you get. This effect is lots of fun in the studio, but, as with any stereo image enhancing product which manipulates phase relationships to achieve its goal, extra care should be taken when using the system with audio that is going to go on the air, particularly at a station that employs phase correction or other stereo enhancement devices in its audio chain to the transmitter. We played with the Stereo Width function a little but had much more fun with the rest of the Vitalizer.