In this issue, we wind up the 1991 Radio And Production Awards where we had a "first" take place. Granted, this was only our 2nd annual competition, but nevertheless, Stephen Smith was the first person to enter both categories in his division (small market promo and commercial) and walk away with both trophies. He was also a runner-up in last year's competition!

We decided to find out a little more about Stephen Smith. Maybe he's some veteran producer hiding out in 110th ranked Des Moines with twenty years of experience under his belt. Not. What we found was a very likeable thirty-two year old who had spent most of his working years in construction, and is only now in year three of his radio career at just his second station. 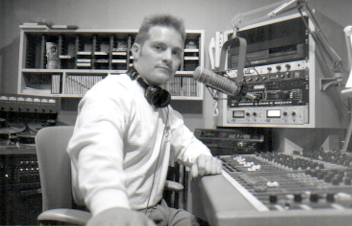 R.A.P.: Tell us about your rather short history in the radio industry. Where did it all start?
Stephen: It started in the fall of '87 when I enrolled at Brown Institute [broadcast school] in Minneapolis. Brown is part of National Education Centers. I started there thinking I wanted to be a DJ. But, during the last three or four weeks of the course, they gave us a brief overview of radio production, and I seemed to really excel dramatically in that portion of the class. I was writing three or four commercials a week -- doing little jingles and things like that -- and nobody else in the class was doing that. I was getting real good grades and thought maybe this was the direction I should go, rather than just spin records. So, I decided to pursue being a production person.

I graduated from Brown in June of '88 and got my first job down in Kirksville, Missouri at KRXL/KIRX radio in October of 1988.

R.A.P.: The transition from construction to radio must have been an interesting one.
Stephen: When I first started working there, I was working seventy and eighty hours a week, and I was wondering to myself, "gosh, is this radio life?" I couldn't quite get the hang of managing my time. Trying to manage your time in construction is very different from doing it in an office environment, and even more so when compared to time management in a production studio.

R.A.P.: Obviously, you chose to stay in radio. Tell us a bit about your first job at KRXL/KIRX.
Stephen: In Kirksville, I was hired on as the Continuity Director, but I was more or less their Production Director also. I filled both positions. We were writing about fifty to sixty ads a week. It was your basic, small town radio situation. But I was real fortunate to have a large staff of voices on hand from both the AM and FM stations. This helped out a lot. In Kirksville, I was pretty much camped out at my typewriter all the time. But I did manage to make it into the studio from time to time. I would save for myself those commercials I thought I could really have fun with. Then I'd sneak in whenever I could, and I'd try to whip out some jingles or some other interesting pieces of work. It worked out fine, and I even won some awards while I was in Kirksville. I won a couple of first place, and a couple of honorable mention awards from the Missouri Broadcasting Association. So I figured something must be going right.

R.A.P.: Not too many people can claim to have won an award for their work during their first year in radio. How did that come about?
Stephen: It was a year after I started my first job that they had the Missouri Broadcasting Association Awards. I won first place for a commercial, small markets, in the state of Missouri. That was for the first jingle I ever wrote outside of school. It was for a little supplement paper that came along with the daily paper called the Kirksville Crier. The jingle was just this little song and dance number. They really liked it, and I sold it to them for fifty bucks. This particular jingle I wrote three months after I started at the radio station.

R.A.P.: You must have some music background.
Stephen: Yes, I do. I used to be a lead singer in a band back in the early eighties. That really helps a lot. I can also diddle around with a keyboard a little bit. I'm not really good on the keyboard, but I'm good enough that I can layer things and come out with a pretty neat melody. I'm also a drummer. I drummed for sixteen years, so I've got good rhythm. But the keyboard I kind of adopted, and I would like to take some lessons and get better at it because, if you can play good keyboard, the opportunities are incredible. The options of what you can do creatively are endless.

R.A.P.: When did you leave Kirksville?
Stephen: I left there on January first of 1991. That's when I came up to Des Moines to work for KRNQ. Chuck Knight, who was the Program Director at the time, hired me. Chuck has since left and is now in Indianapolis at WENS, I believe. Matt McCann is my new Program Director. This was the first time I ever had to go through a Program Director transition, but everything went real smooth. So, I've been at KRNQ-FM/KRNT-AM for about a year now, and everything's working out fine. I've managed to win some additional awards since I've been here, including some EMA awards and an Addy.

R.A.P.: Writing and producing commercials is obviously your forte. Do you also produce promos for the station?
Stephen: I probably produce about ten percent of the promos at the station. We have an excellent Promotions Director, Scott Schubert. He not only comes up with the promotion ideas and brainstorms with the PD, but he also produces about ninety percent of the promos. He's an exceptional producer. My main task is all of the commercial production.