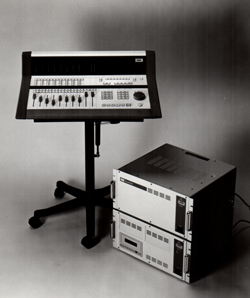 As digital audio technology marches on, hard-disk based recording systems not only get better, but there are more of them to choose from. At just under $40,000, Korg's SoundLink enters an arena of high-end digital multi-track systems where the competition is tough, but it goes into the game with an arsenal of goodies that warrants consideration by any studio looking for a digital workstation.

The SoundLink is a true 8-track recorder in that it has eight inputs and outputs. Some multi-track systems utilize only two or four inputs which you must then assign to the various tracks. The input/output configuration of the SoundLink eliminates that extra step by dedicating input 1 to track 1, input 2 to track 2, etc.. But the SoundLink is more than just a multi-track recorder. The faders and buttons you see on the console in the photo are part of the SoundLink's fully automated, digital mixer. And if that's not enough, wrap up the package with a built-in 16-track MIDI sequencer.

The console is all that needs to be near you. The two large rack units are the Main Unit (which houses the bulk of the electronics) and the Storage Unit (which houses the hard drives and the tape backup). These two pieces can be installed in an adjacent room using the single 50-foot cord that connects the console to the Main Unit (which is connected by one cable to the Storage Unit). The footprint of the console is relatively small -- about 28 inches wide and 16 inches deep. The meter bridge contains eight LED bargraphs, one for each channel, plus two more bargraphs for the stereo L/R mix levels. To the right of these is the large LCD display, roughly five inches wide and three inches high. If you desire, a regular monitor can be plugged into the back of the console, but the small LCD screen is really all that's necessary.

There are about 130 buttons on the face of the console. Sixteen of them are devoted to the MIDI sequencer. Twenty of them are dedicated to the automated mixer. There are MUTE and SOLO buttons for each of the eight channels. Each track has a playback/record button which arms and disarms each track. Each track has a Record Select button switchable between Channel and L/R Bus. This enables fast and easy digital mixdowns to two tracks which frees up six more tracks for continuous multi-tracking and virtually unlimited tracks. Finally, each track has a Channel Select button switchable between Line and Track for input/source and "tape" or track monitoring. There are eight faders for the eight tracks plus a ninth fader which controls MIDI Master Volume and a tenth fader which is the L/R mix master level.

October 01, 2002 2579
Joe Cipriano, Los Angeles By Tom Richards Joe Cipriano is a broadcast veteran with over 30 years in the business. He is most widely known as the voice of the Fox and CBS Television Networks. He is also co-host of the world-wide...
Read More...
© 1988 - 2022 Radio And Production, LLC
Go to Top