The Cheat Sheet: Introducing the MiniDisc

In November of 1991, I wrote a column dealing with the possibility of many new audio formats making their debut in mass media. That was November of 1991, when R-DAT was just becoming a common name in production studios around the globe, when recordable CDs, DCC and MD teased our world with the idea of several format options arriving in the future...you know, one to meet your needs.

Well, as you know, recordable CDs are here. They have been for a while. So what ever happened to the MD (MiniDisc) and the DCC (Digital Compact Cassette Recorder)?

David R. Yaun, Manager of Corporate Communications at the Sony Corporation of America has informed me that a scheduled date of late 1992 is planned for the MiniDisc market introduction.

Sony has proposed the MD system as a format for "personal listening enjoyment." The MiniDisc features a 2.5-inch diameter disc that can store up to seventy-four minutes of digital audio sound, and it's housed in a protective caddy (one-quarter the size of a standard compact disc jewel box). 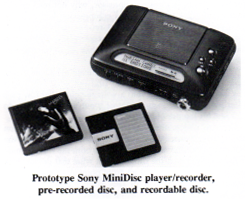 The MD system not only has quick random access to any musical selection in under a second, but it's also resistant to shock and vibration, and it's recordable.

But wait, I'm not finished!

At the time of RAP's print, Sony reported the full support of twenty-one hardware companies (including AIWA, KENWOOD and YAMAHA), eight recordable MD software companies (such as OPTRON and Toshiba) plus ten blank media companies including TDK. 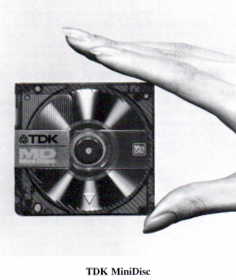 When I was looking for what Sony would expect from the mass media market I received the following comments:

"The digital era of consumer audio has been firmly established by CD, and the MD format will provide consumers with another digital entertainment option." Robert Sherwood, MD, Sony Software Vice-President.

So what should we envision? Expect the CD to remain as the reference standard for home high fidelity music playback with Digital Audio Tape (DAT) complementing CD and MD as the ultimate record/playback format for our world.

Next month I'll give you the full breakdown on the Digital Compact Cassette (DCC) recorder. It's on its way too!

On a final note, I'd like to thank Alan R. Peterson (WLAD/WDAQ in Danbury, CT/Radio World's "From The Trenches" columnist) for stopping by my studio this past month. Al, it truly was a pleasure to meet the man behind the R.A.P. interview and the RADIO WORLD column. But R.A.P. readers let it be known...Al has grey hair! (You thought you'd get away with an earlier photo!)