This month, the RAP Interview stops at the number one market and checks in with the Production Director at the country's top rated CHR station. With just under twenty years of radio under his belt, Dave Foxx finds himself at Z100; and, believe it or not, this is his first official title as Production Director.

Grab a cup of coffee and sit back for this one. Then crank up the monitors and check out Dave's work on this month's Cassette. 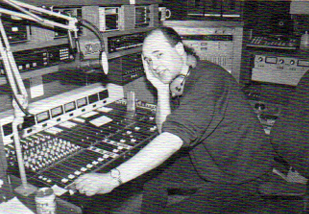 R.A.P.: Give us your background and tell us how you wound up at Z100.
Dave: I did my baby DJ work at a little station in Provo, Utah. At the time, it was KOVO. They've since changed their call letters three or four times. First Media bought the station while I was there. About a year and a half later I got the call to go to their flagship station in Washington, DC which was WPGC. I stayed there for nearly ten years and saw the good times and the bad times; I saw the 11.9, and I saw the 4 shares.

Then I went to B104 in Baltimore. Most of this time I was doing middays, although I did do a two year stretch at WPGC in the mornings. I worked at B104 for six months. Steve Kingston was the PD at the time. Then the rumors started in R&R, and I went into him and said, "Please, please, please." He said, "Just practice saying Z100." Sure enough, about six weeks later, he came up to Z100 and gave me a call, and I was here as Production Director.

I wasn't Production Director at B104 either. I was doing middays, and the bulk of the production was being done by another fellow. But, when it came to promos and stuff like that, I would produce them. That was one of the reasons Steve wanted to hire me, because he knew I could do the promos.

R.A.P.: Would you say Steve hired you for your style of production as it was at B104, or has he molded your work into something a little different for Z100?
Dave: I'd say he wanted my style. He knew what he wanted, and that's why he called me. I worked for Steve originally at WPGC. He was there for about a year before he left to go to B94 in Pittsburgh. That's how I first met Steve, but that was back in '79. I also did promos for him while he was at B94, not all the time but on special occasions. So he knew I had the stuff when he called me up and wanted me to come to New York.

One interesting thing is that he already had a Production Director at Z100 in J.R. Nelson. Steve divided up what J.R. and I were doing. When I first came up here, J.R. was doing the promos, sweepers, and station production; and I was doing all the commercial work. It was about a year and a half later when J.R. decided to leave, and I moved into J.R.'s seat. That was about a year and a half ago.

R.A.P.: Do you have any help?
Dave: Yes. I've got an assistant, my assistant has an assistant, and then we also have another producer at the station who works exclusively with the morning show. As Production Director, I oversee all of this; but we have a pretty good crew, and they pretty much work on their own.

My assistant takes care of a lot of the commercial work - dubs, tags, donuts, and that kind of thing. I'll do the heavy duty commercial work where the spots are being totally produced in house. Of course, I also work on the promos and sweepers and the parody songs for the Morning Zoo. They keep me hoppin' -- like a one-legged man in a butt kicking contest.

R.A.P.: Parody songs? Are you a musician?
Dave: Yes. I studied piano extensively, formally for nine years. I got into jazz piano when I was in high school, and then I studied a lot of theory in college. I now play mostly for pleasure, except when I'm at work, of course. I do a lot of parody work at the station.

R.A.P.: What gear do you have in the studio you work out of?
Dave: I've got a Roland D-50 and a D-110. Together, they give me nine-voice polyphony, and I don't have to sit there layering things. I can actually do it on the sequencer and get most of the track done in one shot. Everything's on MIDI. I've got a couple of samplers, both Rolands. I've also got the Yamaha SPX-90. It's been interesting to read in the last few issues of Radio And Production all the interest in the SPX-90. I guess more and more people are discovering how versatile it is. I also have an Eventide H3000, which I love. But, even though it can do most of the things the SPX-90 can do, there are some things the SPX-90 can do better. I've noticed the SPX-90 is a little smoother. You don't hear as much clock noise in it. So I get a better reverb out of it.

Our multi-track is analog 8-track. We're not tapeless, but that's coming. We test drive so much equipment. I bet we're number one on the list, or in the top five anyway, for manufacturers to have us test drive equipment. They've all been through here. We had New England Digital in here for a couple of weeks with the PostPro. I've had my hands on the AKG DSE-7000 and the ProDisk 464. It all comes wandering through eventually. So, as far as my equipment goes, it really depends upon what week it is. It changes from one week to the next.

R.A.P.: Does it make it difficult to do your job with all these new machines coming into your studio regularly?
Dave: No, not at all. It was interesting when we had New England Digital come in. I took out my 8-track. It's an old MCI JH110 model that works great, but I just took it out and put the New England unit in its place. I figured that way it would force me to learn how to use it quickly. Before the first day was out I produced a promo on it.

R.A.P.: What were your thoughts on the DSE-7000?
Dave: A great machine. It's very radio oriented which I really like. I think if you're looking for really heavy duty production, it's probably not the best system out there, but for the price, it's hard to beat. It's something that any disc jockey can walk up to and learn in just a few minutes because it's got all the familiar buttons on it like fast-forward and rewind. On the other hand, the New England is all icon driven on a computer screen, and some disc jockeys are still computer shy. But, I like the AKG. It's got a good sound to it and a good feel to it. The one thing I wish is that it were direct-to-disk rather than being RAM based. The direct-do-disk systems, I find, are a lot more flexible. For example, when editing with direct-to-disk, it's easier to change your mind later on down the road. With the AKG, you can change your mind if you haven't gone too far. But once you've gone two or three steps down the road, then you're done, and you've got to go back and start from scratch.

I have to laugh when people say they want to get a digital system because it sounds better or has a better signal-to-noise ratio. Unless you're doing a lot of bouncing around of your tracks, it doesn't make any difference because the best FM transmitter in the world only has about a 65 dB signal-to-noise ratio. Anything below that is lost in the mud anyway. The main reason for having a tapeless system would be for editing.

December 01, 2016 3176
By Don Elliot Well this is certainly not a "for dummies" type article; we will not be coming at the subject as if it were a "lab test" either. The answer lies somewhere in the middle. But radio production folks like us are still...
Read More...
© 1988 - 2023 Radio And Production, LLC
Go to Top