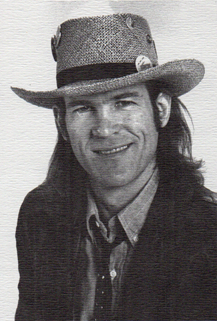 Shortly after Glenn had submitted his first few tapes for The Cassette, it became obvious that he was not your everyday production guy. The fact that he only works part-time for WKDF only added to the mystique. Our mission: Track down this relatively unknown master of the pen and blade, find out what makes him tick, and disclose his secrets to the world.

Glenn's 20 year tenure in radio began in Bellingham, Washington as a "long-haired hippie playing Buck Owens and Conway Twitty" at KBFW. After a couple of stops in Des Moines and Pensacola, Glenn found his way to WKDF in Nashville and will soon celebrate his 10 year anniversary with the rocker. Glenn pointed out some interesting similarities between this interview and last month's interview with Dan Popp. Both Glenn and Dan work a 30-hour work week. Both submitted demos to Word Records (Dan's was accepted -- Glenn's was reportedly exorcised.) And, while Glenn can say "booger" on the air, he doesn't. Glenn's official title (his own creation) is "Production Wiz." His motto: "Give me production and I'll wiz on it."

R.A.P.: What are some of the things you listen for or try to do to make a good spot?
Glenn: To start with, I keep in mind that I'm always working for two clients: The radio station and the individual merchant. Their needs and/or desires may be complimentary and compatible, or they may be conflicting. To put it simply, the station wants to keep listeners listening, and the individual merchant wants to move merchandise.

My primary concern is the radio station, so I try to make the spot as pleasant as possible. Give the listener as few reasons as possible to tune out. Don't shout at them -- I don't like to be shouted at. Don't announce as in, "Hey, all you good people out there." Radio works best on an intimate, one-to-one basis like we're talking now, but get your hand off my knee, okay? Don't talk down to them. Don't preach. Don't insult their intelligence.

I want my delivery to be enthusiastic without being pushy. I want it to be friendly without being smarmy. I want it to be sincere without personally endorsing the product or service. I also want the spot to move along at a good pace. I'll find or make a music bed with a good steady beat or rhythm, and that's a good spot. That's my definition of a good spot for an electronics store that's always having a "tremendous sale"; or a car dealership that has a whole slug of prices, model numbers, and options; or a piece of agency copy that comes across the fax machine at 4 pm and starts the next morning.

However, bustin' your butt on the mundane is only gonna drive you insane. You've gotta save yourself for something that matters. Mind you, I said save "yourself," not your great ideas. That's important. "Save yourself" means save your voice, save your time, and save your energy for a spot or promo you have total control over -- something with some possibilities. Let's say you've got a great idea for a spot, and you've got to write some copy for one of those electronics stores that's "always having a tremendous sale." If you say to yourself, "I'm not gonna burn this idea on this client; I'm gonna save it for someone or something more important," in about 3 months, you won't be getting anymore great ideas. "Use it or lose it" applies here. It's as if using up these ideas creates a vacuum; and nature will not tolerate a vacuum, so more ideas rush in.

R.A.P.: What about something you have "total control over -- something with some possibilities" as you just mentioned?
Glenn: Take the "30 minutes of continuous R&R" intros, the "No-Talk Triple Play" intros, the Work Force 103 intros and drops (on this month's Cassette) -- To a certain extent, they define what the contents will be. If I come across something I've videotaped that I find amusing or obliquely related to one of the above, I'll slap it together and give it to the PD. If he likes it, it goes on. If not, I had fun doing it -- Most of those things I do to amuse myself anyway.
In the case of a station promo, it may appear obvious or sound dumb, but I ask it anyway: "What is this promo supposed to accomplish?" And, surprise, surprise, there's an answer! Of course, it varies from case to case. Sometimes the promo is part of a trade-out, so we have to give them "X" number of mentions to fulfill the contract -- simple as that. Other times, the sponsor wants "visibility" in the community. The "Stupendo Nintendo Olympics" we're doing now is a case in point. You can win this new GAMEBOY video thing by looking under the cap of "specially marked Pepsi products." This is being advertised on TV and we're running ads, too. To generate more interest, to more closely link the fun of GAMEBOY with the fun of Pepsi, we're doing this in-store promotion. The object here is to get people's attention and get 'em in the store.

Here's another example: We ran a history of the Rolling Stones -- Who hasn't? It was put together by ABC Radio, I think. This promo was just to draw some attention to the show. Not a lot, not a bunch of bells and whistles, but let's showcase it -- let our listeners know what it contains and when it's airing. Part of the promo they sent had the "official" announcer doing a cold voice thing. I thought, "This is too pretty for the Stones, too tame, too clean. No one will be offended. We can't have that!" So, I put some music hooks under his voice, came up with this "Rex Reed Meets Liberace" character, and basically just said whatever came to mind -- "Bring a switch." I wanted to deliver the message and exude the essence of the Stones.