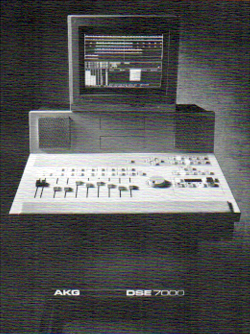 At least a dozen times in the past year, it seems this RAP sheet has had to use, in one article or another, the phrase, "designed with the musician in mind." We have had to accept factory programs in our digital processors that bear names like "acoustic guitar reverb" or "thunder snare." We have all seen ads and brochures or read articles about six-figure, RAM based digital workstations that are "perfect" for the large production house that makes its money churning out major productions for the film, television, or music industry, and, by the way, it'll work in broadcast situations, too. In the world of the big digital audio workstations, radio production types have humbly remained unnoticed, clinging to our trusty 4 and 8-track analog recorders while manufacturers continue to design their DAW's for the larger markets of the music, film, television, and recording industries. Well, things have changed, and our hats are off to AKG Acoustics for the most serious approach to digital audio workstations designed for radio, our industry has ever seen.

AKG didn't contact major recording studios and ask the engineers what they thought would be a good machine to produce radio spots on. They didn't call up engineers at radio stations across the country and ask what they thought their Production Directors could use in their studios. Instead, AKG spoke directly to the people who spend their days cranking out spot after spot, promo after promo, sweeper after sweeper. They spoke to Production Directors, and they asked the right questions -- questions like, "What's most important to you, speed of production or the ability to reshape the ADSR envelope of a sound?" They asked, "Do you want a machine that will double for the cockpit of an F16 fighter jet, or do you want a machine that will put your old 8-track to shame and be half as easy to use and three times as fast?" They asked, "What do you want this digital workstation to be able to do?" They talked to the people the unit was to be designed for and managed to come closer than any other manufacturer to providing a DAW specifically for the small group of people that are radio's production rats. The machine is called the DSE-7000, and it belongs in every radio production room where speed, quality, and ease of use are top priorities.

The DSE-7000 is RAM based. If a system isn't RAM based, it utilizes the hard disk recording technology we discussed last month. On the DSE-7000, all editing, recording, and playback functions are done in RAM. This aspect alone sets this machine well above the many hard disk systems on the market when it comes to speed, one thing most necessary in a radio production environment. However, as is the case with any RAM based system, this speed comes at a price, but we'll drop that bomb on you later.

The DSE-7000 is very simple in design. The computer running the show is an Intel 80386 based IBM compatible. Like any personal computer system, you get a keyboard, a monitor, a hard disk drive, and a floppy disk drive. The keyboard is hidden under the control panel and is used primarily for naming productions or elements you wish to save. The internal hard disk drive is used only for backup and storage purposes. The floppy drive has several purposes we'll mention later. The monitor is your standard fourteen inch color monitor. Add a couple of DSP cards for proces-sing the audio and you have a PC ready to deal with digital audio.

Next, and most impressive, is the software this computer runs. Consisting of a handful of DOS files residing on the hard drive, the program itself is the heart of the DSE-7000. This is a program written for 8-track radio production. It's straight forward and easier to learn than some video games. This facet of the program makes it very attractive to stations where more than one person will be using the machine. You don't need to be a computer wizard to use it. You don't need to be a MIDI magician to understand it. A basic understanding of multi-track production is all that is needed to be up and running on the machine in thirty minutes or less. A jock who is familiar with blade editing and simple 4-track production will fall in love with the DSE-7000 before he or she has even read the manual.

January 01, 2000 25337
By Steve Cunningham The compact disc has become so widely used and accepted that it has nearly overtaken the cassette as broadcast’s audio recording medium of choice. Blank CDs are now cheaper than blank cassettes of similar...
Read More...
© 1988 - 2023 Radio And Production, LLC
Go to Top