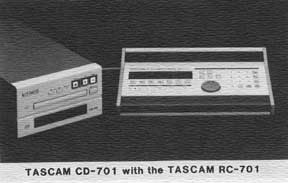 Right off the bat, we've got to say that it was a pleasant surprise to find a profes­sional CD player that was designed for production use as well as on-air use. Tascam's CD-701 CD player and RC-701 remote control are a powerful pair. The most outstanding feature, from a produc­tion point of view, is the optional BU-1 RAM buffer. Rather than talk about the basic features of the CD player first, we're going to jump right into this optional feature and what this buffer can do.

The BU-1 RAM buffer is an optional card that can be purchased for the CD-701 and easily plugged into the unit. The buffer is a 1.5 meg memory board. This mem­ory is used with the REPEAT func­tion of the re­mote control­ler to en­able you to create loops of up to 3 min­utes in length! Those of you who have used samp­lers to make loops of song segments will appreciate the ease at which loops can be created. You'll also appreciate the 3 minute maximum loop length, which opens many doors for speed­ing up production time. If there is a 15 second bridge in the middle of a song on CD that you would like to loop to a full 60 seconds, you simply use the SEARCH wheel to locate start and stop points, activate the REPEAT mode, and hit PLAY. Bingo! You have an endless loop of the bridge. An additional plus with the RAM buffer is the audio rise time when you hit PLAY. When you cue up to a track, the first few seconds of the track are loaded into this memory. When you hit play, the audio is ALWAYS there instantaneously. Without the buffer, there is a delay of anywhere from zero to 1/3 of a second ADVANCE \D 3.60before the audio rises. This optional RAM buffer makes the CD-701 worth taking a close look at if you are looking for a CD player for the produc­tion studio. The buffer lists for $399. The CD player itself lists for $1999, and the RC-701 remote control unit lists for $1249. Ouch!

The RC-701 is not the only remote con­troller available. For over $1000 less, you can get the RC-7 remote controller, but you lose the digital readout of the RC-701 along with the ability to control up to 4 CD play­ers from one remote control. There are several other sacrifices, but we didn't have access to the RC-7 to tell you much about it. If you'd like more info on it, contact your local Tascam dealer.

The CD player itself has the usual "new" circuits and construction to make it a "better" CD player. If you're like most production types, you aren't going to be too concerned about the new circuitry of the digital-to-analog converters or the new "Vibration-free Rigid Disc Clamping System." It's a CD player! It sounds like one! Now, if you want to talk about out­puts, you have balanced XLR outs, a digital out, and a PHONES/MONI­TOR output for direct head­phone moni­toring or for hookup to the re­mote control unit's MONITOR output. More on that later. Dip switches on the back allow for adjustment of the cue audio level. This is the func­tion accessed by pressing the AUTO CUE but­ton on the re­mote controller which allows the unit to cue to audio for quick starts. The front panel of the CD-701 is quite simple. You have a couple of SKIP buttons for selecting tracks, an OPEN/­CLOSE button for the CD tray, a STOP button, a PLAY button, and a READY but­ton. The READY button acts much like a PAUSE button. All other func­tions of the unit are accessed by the re­mote control unit.