There's RF In My Production Room!

We've received a few letters and calls asking about RF interference and what can be done to keep it out of the production room. You might expect to see this subject covered in an engineering magazine, but RF interference usually does its dirtiest work in the production room. This is the room where the noise ends up getting recorded for playback on the air! As Production Director, you should make it your business to know why you have RF interference and what can be done to get rid of it. If you've been dealing with the dreaded RF "buzz," there's a good chance you don't have to.

This problem has a tendency to appear in the production rooms of the medium and smaller market stations. Why, you ask? More often than not, the transmitter or transmitters of these stations are in the same building, or at least on the same property with the production studio. The "buzz" may be low level and just a minor annoyance, or the RF interference may be so strong that you actually pick up the audio in the RF signal as well. In either case, there are ways to get rid of the problem. The following method is one commonly used. Pass it on to your engineer or do it yourself if you have the technical background.

The first and most important item to check in any production facility is the ground system. The ground system can do the most to either remove or induce RF buzz in any room. Improper or partial grounding is the most common culprit, and it can be corrected with a minimal expense and a few good hours of work. To begin with, every piece of equipment in a room should have one and only one ground. Check every power plug and remove the third pin (usually the round one). This breaks the existing ground to the power line. Next, run a heavy gauge copper wire across the rear of the furniture and attach it to the station ground system in the transmitter room. This should be run along the floor if at all possible, and in the most direct route possible. Once you have a ground that runs directly to the transmitter(s), attach a new ground wire from each and every piece of equipment in the production room to the new ground. If you have more than one production room, each room needs to have its own separate ground to the transmitter. 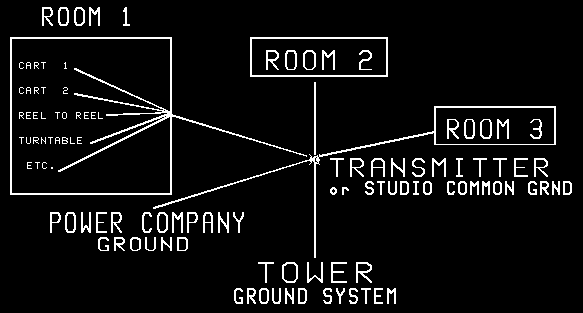 Now, you may still have RF buzz in some equipment that is prone to high energy fields. Turntables and out-board micro-phone pre-amps are the most likely to have these problems. Be sure there is a ground to the base of the turntable as well as the pre-amp. A broken shield on the microphone cable can be the cause of buzz in the microphone. If you still have a buzz after fixing all this, each piece of equipment will have to have special attention to the remove the buzz. There are ferrite beads that can be installed on the input and output terminals inside the equipment. This serves to "kill" any RF that might still get in the equipment. Proper treatment of balanced and unbalanced audio sources and loads is also very important to control RF buzz.

There are at least a dozen other ways to remove RF from equipment, but they are of a much more technical nature and should only be done by a qualified engineer. In one very extreme case, I have seen a production room lined with screen wire. The screen was grounded to remove the RF from the room. If this seems a little too extreme, I must explain that above the studio were two full powered FM's with a combined ERP of 100,000 watts! -- Just a little RF to worry about.

I hope this article helps those of you with the famous "buzz" to get rid of it. If nothing else, just knowing the cure might be enough to get someone working on the problem for you. Every situation is going to be different, and you shouldn't take on a job like this unless you know what you are doing. Unfortunately, there are many stations out there that simply live with the RF interference because they don't know how to get rid of it. They just accept it as something that goes along with having their studios at the same location as the transmitter. Consult your engineers or consult an outside engineer if necessary. With minimal expense and a little work, you can clean up your studio. Now go have some fun and get dirty working on those ground systems. If you have any questions or problems, contact me through R.A.P. at the address and phone number on the back page. I'll be glad to answer your questions if I can.

January 01, 2007 8768
by Steve Cunningham Despite the fact that we live in an MP3, FTP, gotta-have-it-right-now world, I still burn through a lot of optical media every month. Compact disc masters for clients and demos for my agent, audio CDs for my...
Read More...
© 1988 - 2023 Radio And Production, LLC
Go to Top