An audio consultant was hired. Money was paid to have someone come in and listen to the radio station, then report on the "sound" of the station from a technical perspective (not a bad job!). The consultant said the music didn't sound very clean; some distortion here and there.

Gerry had been thinking about building a music dub center for about a year. Now it was more than just an idea, it was his next assignment. Gerry Dalton, Chief Engineer at K104 in Dallas, began his task. In less than 2 weeks it was done. The dub center now helps give K104 one of the cleanest signals in the market.

Much of the music played on K104 is carted from album. This called for a quality turntable first. A top line turntable from Linn made the grade. It rests on top of a box filled with 780 pounds of sand. A counter was built around the box and an equipment rack was placed on top of it, over the turntable. The turntable is physically isolated from the counter and equipment rack.

Filling the rack with equipment began with a brand new ITC-99 cart deck. That sits at the top of the rack (see photo below). Beneath it, and not clearly visible in the picture, is an ATI MA-1000 monitor amp to drive the speakers and head-phones; low output, but extremely high quality. 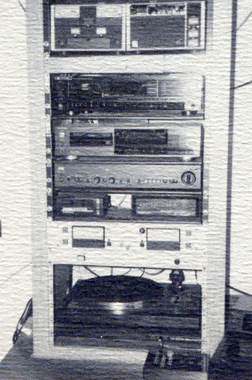 Next in line is the Harris R-DAT digital recorder. All songs to be carted are transferred to digital cassette first. This creates a digital library of all music on the station and offers a digital dub of a song should one need to be re-carted.

Beneath the R-DAT is a Techniques SLP-550 CD player, an excellent consumer grade deck. Under the CD player, an NAD-300 pre-amplifier, a high grade pre-amp for the turntable that also functions as a switching center to monitor the different decks in the rack. Below it on the left is a digitizer and on the right, a Durrough loudness monitor.

The unit with the 2 VU meters is, in effect, a custom made console. Levels and balance are controlled here. The unit was specifically designed to avoid having to pass signals through all the circuitry involved in a standard mixing console. Only the highest quality components went inside the box. The noise level is practically non-existent.

Separate from this unit and under it is a 1 3/4 inch panel with 2 buttons. One sets the ITC to record mode and the other button is the magic one. Hidden in the rack is a Henry Engineering Syncro-Start. It is connected to the R-DAT, the ITC, and the digi-timer, and is activated with the button. Once the R-DAT is cued to the cut to be dubbed, and the ITC is set to record, one push of the button automatically starts the R-DAT, the ITC, and the digi-timer. There are no more loose dubs or tight dubs and the times are exact.

The computer to the left of the rack runs a program, written by Gerry, which prints the labels and catalogues the music in an easy to use filing system. The Techniques SLP-1300 CD player on the counter to the right was added recently to offer pitch control of CD's. The other CD player doesn't do that.

Easy to use, and clean as a whistle. The price tag on this "ultimate music dub center" --- around $15,000. Congratulations Gerry, on a job well done!

March 01, 2002 6875
by Steve Cunningham I like shareware software in general, and not because it’s inexpensive (although it usually is). No, I like it because it’s often the product of one or two manic programmers who, because they couldn’t find a...
Read More...
© 1988 - 2023 Radio And Production, LLC
Go to Top