EarthMoments announces the release of 5Elements, a selection of unique sampled instruments created for Kontakt and the free Kontakt Player. The 5Elements concept is inspired by the ancient Indian concept that all creation, including human existence, is made up of five essential elements: Earth, Water, Fire, Wind, and Space. 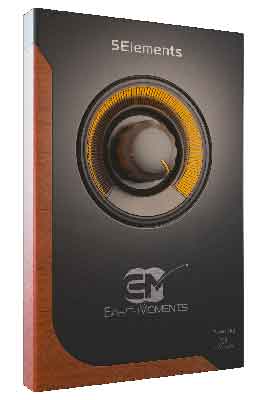 In 5Elements, EarthMoments has captured the authentic character of eight original handmade instruments created by Aurelio C. Hammer at the Svaram workshop in Auroville, India. 5Elements adds features that enhance these distinctive instruments to create an immersive set of lively sounds, full of a wide range of frequencies and layers. It’s perfect for sound design and scoring, adding a refreshing perspective to your projects. “What we are looking for in our instruments is capturing the atmosphere, the inherent harmonic structure of nature, because the aesthetics are right in nature,” comments Hammer.

Each instrument includes several playing styles called “sub-instruments, such as strummed, plucked, struck with mallets or sticks, and pre-recorded phrases. You can layer and mix two layers of instruments or sub-instruments and can apply compression, EQ, and reverb.

5Elements also allows you to add a drone layer of binaural beats. A binaural beat is the frequency perceived by the brain when two different frequencies are listened to, one in each ear. The perceived frequency is the difference between the two frequencies. Research shows that certain frequencies are associated with specific brain activity. The use of binaural beats in 5Elements is influenced by the traditional drone sounds in classical Indian music. You also can add an ambience layer of field recordings and sounds of the beach, forest, village, workshop, and rain from various places in South India.

“I am very excited about this collaboration with EarthMoments,” Hammer declares. “Hopefully they can bring the sounds of Svaram to people who wouldn’t have access to it so that the sounds inspire people and maybe open their ears to the vibrations of nature.”

EarthMoments 5Elements is available now for a street price of £99. For more information visit https://earthmoments.com/pages/5elements.

August 01, 1995 13829
by Jerry Vigil When digital audio storage and retrieval became practical, 360 Systems was quickly on the radio scene with their DigiCarts. Several companies introduced "digital cart machines" during this time. They all...
Read More...
© 1988 - 2022 Radio And Production, LLC
Go to Top