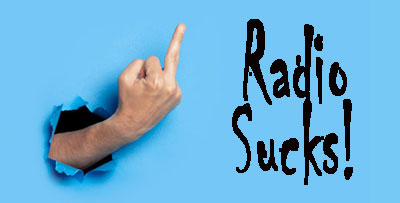 I’m going to ruffle a few feathers with this but I’ve always been a $#*! disturber, so why stop now. I saw a post from someone on Facebook recently. We’ve all seen these before, someone posts “Well, XYZ company just laid me off. After 38 years, I’m DONE with radio. This industry sucks! I hate it. This company is brutal. Radio is dying, get out now everyone!” And then all the past radio casualties have to post a comment and say “Radio sucks”, “All they care about is profits”, and reminisce about how glorious it used to be and other “back in my day” stuff.

I find it ironic how easily they forget how it all started for them. They don’t remember when they got that very first job when they were 20 years old, fresh out of radio school. There’s a good chance they got that first gig because the person who had the job before them was let go. The company made a change, and let someone go, and this person was hired and benefitted from someone else’s misfortune. And if didn’t happen in their first job, then I guarantee at some point in their 38 year career, they eventually replaced a few other radio people who were shown the door, while they were on their way up the radio ladder. This industry has always had younger talent coming in and replacing the veterans who made too much money and didn’t do enough to earn it. Way back then, that person was a cost effective replacement, who showed a lot of potential, and management wanted to give them a chance. And they paid them every 2 weeks, for 38 years, to do their job. That was the arrangement. There was no guarantee. But now, they wouldn’t learn Instagram or Tic Toc, refused to supply content for the website or even participate in the stations podcasts. They stopped growing, stopped caring about radio and started complaining about how much more work they had to do now. And please don’t tell me anything about a company not being loyal, they were the one who quit one station and went across the street to the competition for that big pay day a few years back.

The Radio industry doesn’t owe them anything, in fact...THEY OWE RADIO! That Harley Davidson he loves to ride, that new video game console his son just got, those fancy clothes his daughter buys, his wife’s new jewelry and that house where all their  damn stuff lives...Radio bought all that stuff for him! And it’s not just the material things that radio has gotten for him. If he’s been in radio for 38 years, chances are almost ALL of his friends were either people he worked with in radio, or friends he met through radio. Maybe he even met his wife because he worked in radio, either with her or through another radio friend. And he’s bitter?

I’m not sure if his head has been in the sand for the last 13 months, but there’s a global pandemic going on. Business are closing, lots of them. Other people are losing jobs too. The businesses that are still open, are barely hanging on. Has he not seen all the “For Lease” signs on the buildings downtown? Radio advertising is down, there’s not as much money right now. People are having a hard time making ends meet. Radio companies are struggling too.

There are millions of people that currently work at a job they absolutely hate every, single, day! They’d give their left arm to work in a business that’s as much fun as radio was, and is. And what about the people who don’t even have a job right now? And he’s complaining that his “fun” job of talking on the radio and playing music, that all his neighbors were so jealous about for almost 4 decades, is finally over?!? And let’s not even talk about the “package” he got when they walked him out the door. Good grief!

Yes! Radio is changing, it always has changed. Unless he just got let go from a station that still played Dragnet off of acetate records. It HAD to change. When TV came in, radio stopped playing those old radio shows and played started playing music. Radio survived when people could buy 8 tracks, cassettes and later CDs and listen to their own music in their car or at home instead of the radio. Radio survived when satellite radio started up, and later when the internet, YouTube, Spotify & Podcasts came on the scene. Radio has always, and WILL always survive, with or without him. And maybe, just maybe, his bitter attitude is one of the reasons he got let go in the first place. Actually, he should be thrilled he had a job that long if that’s the kind of attitude he had.

So don’t go away bitter, just go away...and get off my lawn!