Production 512: Cheating On a Puzzle

I don’t know if anyone else noticed during the pandemic with all its attendant weird stories, but the jigsaw puzzle companies are really flush right now. It seems that many, many people took up this usual beach vacation pastime as a way to wile away the hours when not binge-watching Netflix. The companies that make them can’t keep them in stock!

My wife has one that is apparently VERY difficult, featuring a fox in some heavy woods. (We have an embarrassing number of fox photos in the house. Hmm, I wonder why?) She has asked my help on it repeatedly, but I just can’t stay with it more than a few moments. I love spending time with her, but it’s just not something I particularly enjoy. One of the rare times I actually sat down and gave it a try, I commented that the colors and textures all looked the same to me, and it would be lovely if we could just ‘reshape’ some of the pieces, just a little, and get on with things. She replied, “That would be cheating and defeat the whole purpose.”

Then something occurred to me that I hadn’t thought about before. Producing a perfect commercial or promo is very much like a jigsaw puzzle, but we DO get to reshape the pieces…a little. With a little planning and forethought, we don’t have to shave the pieces much, but what if the music just ‘comes together’ perfectly and the VO is pre-cut and doesn’t quite fit the little holes you so artfully designed? That’s when Time Compression/Expansion (TCE) makes life WONDERFUL.

Before we get to TCE, let’s think about the construction of the music/FX tracks, or in jigsaw parlance, the outer edges of the completed puzzle. (Puzzlers always start there because every edge piece has a straight side, making it easy to spot.) For the purpose of this column, I’m going to say you have a script, a VO track and guidelines on the music. Let’s take it one step further and stipulate that this is going to be a promo for a station flyaway to a faraway city to see an artist your station plays all the time. Any other spot or promo would then just be a cut down version of this ‘ultimate’ promo.

Start building the music track for your promo using the bounced versions. Beat-matching is the order of the day, leaving enough instrumental portions to allow your VO to drop right into those holes. Add a few FX to emphasize transitions where needed and the whole track should come together pretty quickly. The frame of our little jigsaw puzzle is complete.

NOW, start placing your VO. Hopefully, you’ve planned the little donuts for the VO to at least approximately the right length. For those that ALMOST fit, it’s time to get into that marvelous TCE tool.

Start by placing the track at the right starting point and figure out how long it really needs to be.

In Adobe Audition™ it’s a simple matter of selecting the track you want to stretch or shrink (I’ll say that instead of compress to keep things clear), going to the Effects menu, roll down to Time and Pitch and then select Stretch and Pitch. Once the dialogue box pops up, open the Presets menu and select Slow Down or Speed Up. About a third of the way down in the box, you’ll see the Current Duration and New Duration. Enter the duration you want the piece to be and try it out with the preview button in the lower left corner of the box. If it sounds OK, hit Apply and you’re done!

In ProTools™ it’s even simpler. Make sure you’re in Slip mode to avoid any unexpected weirdness. Click and hold on the Cutter tool in the tool bar. Select the TCE (Time Compression/Expansion) version. Click on the back end of the VO file and drag it to where you want it. The file will then redraw and you can hit play. If it sounds right, you’re done. If it sounds wrong, just hit [command]+Z (undo) and try again. Don’t use the TCE cutter on the file more than once or you will start getting digital artifacts. That’s bad. I’ll talk about that a little more in a moment.

I’m honestly not versed in any of the myriad other DAW systems, but fairly confident every DAW has some kind of TCE tool. It’s really important in the music production business and I just can’t imagine producers would have to live without it.

There comes a point when TCE is not going to do the trick. You don’t want the spot to be rolling along at a certain pace and suddenly have your VO turn into an auctioneer (too fast) or an old, drunken goof (too slow). At that point, you’re going to have to re-think your approach either with some artful editing of the VO or perhaps (I hope not) redesign your music track a bit. TCE can be a pretty brutal tool if you don’t use it with some finesse. I hear this a lot when producers apply WAY too much TCE on a disclaimer. That’s a rookie mistake. If you have to, get the VO to recut the disclaimer with a faster clip. A decent VO talent will know to do this from the outset.

The genius of TCE is, electronically, this amazing tool goes through the audio looking for formants, which is what makes a vowel in speech or singing unique. WARNING: Technical junk coming: The first two frequencies of a vowel tell the human ear whether the vowel is an A, E, I, O or U. (Yes, there are several ways each vowel can be said, but I’m trying to keep this as simple as possible.) The difference between those two frequencies is what makes an A sound like an A. For the geeks who need to know, the difference of those frequencies for the letter A is 190Hz. Once the TCE knows what the vowel is, it can shrink or expand the duration of this tiny slice of the file. Consonants are left basically untouched because they are already minimal in length.

The problem with TCE is when you try to push beyond more than 10% speed change, the algorithm can’t cope. It WILL try, but you end up with a lot of digital artifacts, which really garble the message and your masterpiece becomes a dumpster fire of gobbledygook.

So, what IS a digital artifact? It’s any undesired or unintended alteration in data introduced in a digital process by an involved technique and/or technology. Everybody has seen video digital artifacts when watching a movie online or even on your regular cable TV. My biggest gripe about Stumptown on ABC is they are constantly plagued by heavy pixilation that looks something like this. 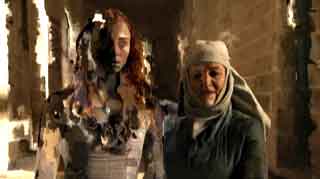 I don’t know if it’s something that’s being introduced locally or if it comes from the network that way, but it drives me crazy. (BTW, this image is NOT from the show.) The most common reason for heavy pixilation is someone has sped up the show to make room for more commercials, which makes me suspect the local outlet. You’ll see this kind of thing a lot on certain movie channels that are breaking up movies for commercial presentation, one of the main reasons I avoid watching movies on any channel that doesn’t run movies uninterrupted.

If you want to hear digital artifacts in audio, just use too much TCE and you will definitely get it. It sounds awful. I’m not going to give you an example of digital artifacts, but I AM going to give you an example of a promo I did for Most Requested Live Worldwide With Romeo a few weeks ago that used this technique. (It’s the last promo we did before the pandemic, actually.)

It’s a promo for a trip to Washington, DC to see Harry Styles, which was later cancelled, sorry to say. See if you can spot the TCE.