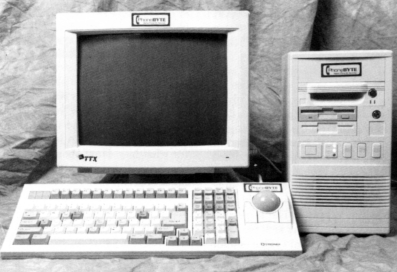 The RAP Test Drive is generally reserved for equipment one might find in the radio production studio. But we must not forget the "other" producer in the radio station, the morning show producer. At many stations, this individual is doing a production shift packed with edits, sound effects, music beds, voice tracks -- pretty much the same stuff we play with in the production room. The major difference is, on the air, it's live. In production, it's not. And this "on-air" production isn't confined to morning shows. Depending upon the station and the format, a great deal of "production" can occur on any and even all day-parts. For producers of these live shows, The Blue Group presents PhoneByte, a digital system designed to handle the recording, editing, and programmable playback of listener phone calls. But PhoneByte's capabilities don't stop there. It is basically a 2-track digital workstation, able to record, edit, and playback any audio, stereo or mono. For on-air shows, this can include sound effects, special music beds, traffic reports, IDs, etc..

PhoneByte is a PC based hard-disk system that consists of the computer, a color monitor, and a standard computer keyboard with several colored keys to indicate various functions of the system. A built-in track-ball on the keyboard handles mouse-type screen functions. The computer houses the hard disk drive and I/O cards. Installation is quick and easy if you're simply hooking up Line In and Line Out, but a more elaborate installation is available. The PhoneByte will interface with some phone systems to enable it to automatically record calls as the phone is answered, and many functions of PhoneByte can be wired to remote switches.

There are only three primary screens to familiarize yourself with, the Main Screen, the Edit Screen, and the Stack Screen. The Main Screen consists of a row of "buttons" and indicators at the top, and a collection of buttons and indicators at the bottom. Each button can be clicked with the track-ball, or its respective "hot key" can be pressed on the keyboard. The key is designated on the screen by a capitalized red letter. For instance, the "S" on the stop button is a red capital "S." Press "S" on the keyboard to stop playback or recording. The "T" on the "SorT" button is capitalized and red. Press "T" on the keyboard to access the sort function. The center of the screen, and over half the screen, is occupied by information for ten recordings. You can have any number of separate recordings in the system (limited only by the amount of recording time available), but only ten appear on the Main Screen at a time. "Scroll bars" at the right are used with the track-ball to scroll through other recordings on file. Each recording is numbered automatically when you begin recording. It is also time and date stamped, and the length of the recording is displayed. There is room to add a comment to each recording such as, "good winner," "Beatles request," "needs editing," or whatever. Recording and playback is very simple. To begin recording, either use the track-ball to place the arrow on the Record button then press one of the track-ball buttons, or, simply hit the red "R" on the keyboard. Recording begins immediately. Whether you press the "R" key or use the track-ball arrow, when recording is engaged, the track-ball arrow automatically goes to the Stop button, since this is probably going to be the next command. Let's say we're on the air, taking requests. Press "R" to begin recording. Answer the phone. Record the caller. If you're going to answer the next line immediately, you don't have to hit Stop; you can simply hit Record again. The system closes the previous file and begins recording a new one. Every time you hit Record, the current file is closed and a new file is created. Recording never stops. Each new file is assigned a number, and the "Find" function lets you locate recordings by number. Let's say you're recording dozens of calls and finally get one you like, but you don't want to stop recording. Simply glance at the screen and make a mental note or jot down the number of that phone call. Going back to that call is quick and simple with the Find function.

March 01, 1998 12351
By Jerry Vigil In this day of digital workstations with plug-ins and built-in effects, one might think that the external effects box is becoming a thing of the past. If the only effects you need are basic reverbs, delays, pitch...
Read More...
© 1988 - 2022 Radio And Production, LLC
Go to Top