Production 512: What Is This USP You Keep Talking About?

Let’s start with a definition. Unique Selling Proposition: The factor or consideration presented by a seller as the reason that one product or service is different from and better than that of the competition.   – Entrepreneur Encyclopedia

I recently gave a seminar from the comfort of my home studio to a group of Italian radio production students in Bologna, Italy via Skype. I’ve done this before with students in other countries that make travel inconvenient or ridiculously expensive, but this was my first in Italy. As usual, the students were very attentive and came up with some really good questions, even though their first language was NOT English. It became immediately clear that their instructor, Lello Orso was doing it right because these students weren’t just asking good questions, they were asking the right questions. I didn’t have to spend any time at all explaining EQ, compression or any other technical item. They wanted to know about how to better identify the USP and how to brainstorm ideas for copy.

A few weeks before that, I was asked to evaluate the production of a radio class at Fanshawe University in London, Ontario. I’m just grateful that I didn’t have to grade on a curve because a lot of really excellent production would have gotten poor marks. In other words, every piece got at least a B, while there were a few A+ and A++ pieces that were entirely worthy of airing on any major market radio station. Even the lowest marked pieces were pretty damned good; the only reason for the lower marks was a less distinct USP. Their instructor, Abe Kelledjian clearly has his group on the perfect technical track to success, but some are still grappling with the concept of USP.

I’ve done seminars in London, Amsterdam, New York, Los Angeles, Berlin, Paris and Sydney, and without exception, the BEST questions were always about USP. It’s the entire reason we do this…any of this.

Every award winning piece of production, spot or imaging, I’ve ever had the pleasure of listening to has stood out because it delivered on the Unique Selling Proposition. Ear candy is fun to listen to, and even more fun to produce, but when the USP is lost, it’s just organized noise. When you sit down to your DAW and you don’t know what the USP is, you are headed for a big, gooey glob of mediocre. Don’t do that.

I know a lot of people struggle with this concept, so I want to break it down, give you some great examples and hopefully get you on track to win the mental portion of whatever the heck it is we’re doing. Let’s serve up some well-known, USPs.

15 minutes can save you 15% or more on your car insurance. Every GEICO TV and radio commercial, regardless of the silly drama surrounding it has the same line. It’s not a sexy or funny message…it’s very straightforward. For a long time, they would deliver the USP as a non-sequitur to whatever the theme of the spot is about: A camel walking through an office asking what day it is (Hump Day!) or this little piggy going ‘wheee’ all the way home, then cut immediately to the USP. The last few years it’s been that cute little gecko promoting GEICO with a cute British cockney accent. (Trivia: The gecko was first introduced because SAG was on strike and no live actors could be used. It was such a hit, they adopted him as their ‘unofficial’ spokesperson…err, spokes-CG-animal, I guess.) 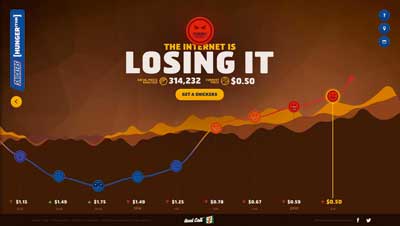 You’re Not You When You’re Hungry. This Snickers line is a bit more subtle than simply saying it. I think my all-time favorite is Willem Defoe in a white dress, standing over a blowing subway grate, in the iconic pose made famous by Marylin Monroe. He’s being very crabby and cross until someone hands him a Snickers and after biting into it, he becomes Marylin. A strong second is Betty White playing football, which made me literally laugh out loud. In the UK, the Mars company was one of the first to use social media advertising in a very cool way, using a variant of the same USP:

Another famous Mars USP was for M&Ms: The milk chocolate melts in your mouth, not in your hands. I’m pretty certain everyone has seen a TV spot with an open hand displaying no chocolate marks. I distinctly remember, looking at my hand after I’d eaten a fistful of M&Ms and saying, “Hmm. They’re right!”

We’re number 2. We try harder. This Avis Car Rental pledge of better service was enduring, and while they never really quite surpassed Hertz, they made a terrific showing.

When it absolutely, positively has to get there overnight. FedEx used a lot of different scenarios to set up their USP, but it always came back to that line. Consistency is really important in making a USP the anchor of a company’s brand.

With those examples, you commercial producers should already have a good idea of where this is going.

Let’s say you’re producing a commercial for a car dealer, what are your USP options? There are several, actually. It could be “largest selection,” “easy financing,” or “excellent service.” If your potential client wants ALL of those, run. Run as fast as you can. OR, make it a teachable moment for the client (and perhaps the AE).

The USP does not always have to be the same from one commercial to the next unless you are building an enduring brand for a client. When clients or their AEs would come in with a whole laundry list of things they wanted to include in their commercial, I would painstakingly explain why this was a monumentally bad idea. Many insisted. Then they had the gall to complain when they didn’t get the results they’d hoped for, and ultimately gave up on radio advertising. When they actually listened to what I was preaching, they opted for a series of commercials, each with its own USP to run over several weeks. Without fail, they came back for more because it worked.

To be truly effective, you can only have ONE Unique Selling Proposition in any one piece of production. When you add another three or four, you water down the impact to a point where the ad is, well…pointless. Impact is what you want and to have impact you must have a message that rings with a singular note of clarity. This is where some are mouthing the words, “Less is MORE,” or to add a bit of side-spin, quoting The 22 Immutable Laws of Marketing, “narrow the focus to broaden the appeal.”

For Imaging Producers, it’s actually even simpler. Your USP is almost always your strap-line. For Z100/New York, it’s Z100 is New York’s number one hit music station. Day in and day out, at least every other piece of imaging includes that specific line. When a piece of imaging does not have that specific line, it is strongly implied, or there is a different USP being applied like, new music first, or home of the phrase that pays. But the brand is drilled into the listener’s mind relentlessly. I can guarantee that there are very few New Yorkers who, when prompted with Z100, will not reply with New York’s number one hit music station, which is also…wait for it…the Z100 phrase that pays…clever, eh?

When going back to our definition, The factor or consideration presented by a seller as the reason that one product or service is different from and better than that of the competition…it becomes clear how Z100’s strap-line works. It is a simple declarative proposition that says Z100 is New York’s number one hit music station. There can only be one number one, making it unique. Z100 is selling their hit music service. Every time that simple sentence is on the air, Z100 is making a claim of hit music supremacy. Z100 is making a Unique Selling Proposition.

For my sound this month, I have a promo for the nationally syndicated show Most Requested Live - Worldwide with Romeo that has a stark USP. I’m confident you will pick it out immediately. My ultimate hope is that anyone listening to your future work will be able to do the same.

If your promo or commercial has a few USPs or worse, NO USP…you’re going to miss the mark, every time.

October 01, 2006 7999
by Steve Cunningham Podcasting. Everybody and his uncle Bob is podcasting. Often podcasting is little more than remote recording, which we all do now and again. But beyond the actual activity of creating, editing, and uploading,...
Read More...
© 1988 - 2023 Radio And Production, LLC
Go to Top