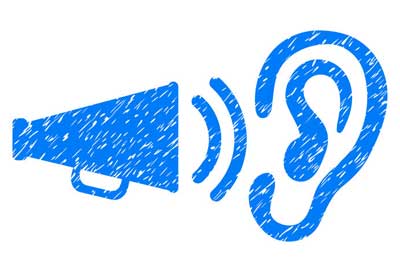 I’ve been writing, producing and voicing radio ads for a while. Longer than many of my radio mates have been alive (how’s that for sobering!) Hopefully, I’ve been doing enough things right to justify my existence. Which is why I offer some observations that I hope are worth some merit.

Back when I started, the emphasis was getting listeners to do what the name implies—listen! The question is how do we make that happen. For me it was listening to the greats—Bert Berdis, Dick Orkin as well as Fred Gwynne (yea, you might know him as Herman Munster. But his ads for Volkswagen were some of the most relatable reads I’ve ever heard. Talk about a master story teller!)

I gravitated towards the “Dick and Bert” style because, after all, if you’re at a party don’t you tend to gravitate towards that person who can tell a funny story? But, when called for, I could channel my inner Fred Gwynne to deliver the more straightforward ads with the goal NOT to sound like an announcer reading a script.

This is what I was taught to engage a listener. Catch their ear. They hear a ton of radio ads in the course of their time listening. How is your ad going to stand out from all the other locally produced ads from your competitors? A big voice announcer? Everybody’s got ‘em. Ads that start with “Looking for a…” Or include non-conversational phrases like “conveniently located at…” (Don’t know about you, but I’ve never used those words when talking with friends. “Need to get to my place? I’m conveniently located at…”)

To take that thought further, why do many people look forward to the TV ads during the NFL season’s finale. They stand out. They take risks. Ya think when the sales rep presented “WHAZZZZUP” to their national advertiser there wasn’t a little apprehension? How did THAT one work out.

Yet, when I go on line to listen to some of my favorite radio shows, almost all locally produced ads sound the same. Be honest. How many times have you listened to your favorite station until a commercial break starts which then finds you reaching for the pre-sets.

Here's one way to sum it up. While listening to a local morning show, they listed the 10 most boring things. Commercial breaks came in #6! Don’t know about you, but I take that as an indictment to how we’re engaging listeners.

If you were a business owner, do ya think these mass-produced messages are engaging listeners enough to KEEP listening?

I’ve heard the phrase “I can sell that” a lot. And I get the whole “art vs. commerce” thing. Which begs the question- “can you KEEP selling it” when, after enough ad frequency, the unique selling proposition wanes?

But, if listeners don’t hang around long enough to catch the client and their message, have we done that business owner a disservice? Have we delivered what we promised?

Sure, engaging the listener involves taking risks. And they don’t all work. Trust me. I’ve had enough blips on my production radar to give even the most seasoned air traffic controller a migraine.

For many, engaging the listener involves ads that tell a story. As a production guy, I LOVE ‘em. They are truly a craft-both in writing and delivering in front of the mike. And I admire those masters of the art form. But if this is all ya got-isn’t the luster going to wear off over time? Might we be better served engaging a listener by changing things up occasionally?

After producing hard sell ads for client who liked that style, I started producing ads that poked fun at the style-while keeping the hard sell in the presentation. It gave “Mr. Hard Sell” a personality. And it gave the client the best of both worlds-his beloved hard sell and a twist that engaged the listener to try and figure out what silly situation would unfold.  https://chirb.it/aAJGpK    https://chirb.it/6c74E9

Are we satisfied to produce radio ads that serve as background noise? Dare to think not just “outside the box” but MILES outside that cardboard cube.

Here’s a simple challenge that motivates me. Maybe it’ll work for you. Can you compile 30 minutes of your archived commercial samples where no two sound the same? I could compile 60 minutes! Now, this is not meant to imply some level of advanced competence. But it does, I think, show a level of dedication to our craft to find different ways to convey a message that engages listeners.

I ask myself if, as a commercial producer, we have deluded ourselves into creating radio ads that satisfy the pallet of other radio people. What if we dare to focus on what might engage a listener.

I’m almost ashamed to admit I listen to satellite radio. I fear it’s the same reason many listeners do. The lack of compelling local radio ads.

Now, I’m not suggesting EVERY radio ad can be a Clio winner. Many clients prefer the straight forward approach. Which is perfectly OK.

But, in my experience, it has been reinforced on multiple occasions that selling also does include educating. And when educating clients that there are multiple ways to present their message-some that might break the pre-conceived mold-you might be surprised how many will agree to a non-traditional approach. Sure, it might result in rejection. But not any more rejection than we face daily.

I’ve won awards in national and international competitions that were the ONLY recipients representing local radio stations. Everything else was done by ad agencies.

Thing is, I’ve worked with MANY radio people who could perpetrate the same thing. Which begs the question-why don’t more of us exhibit pride in the talent that got us where we are today?

The phrase “control the creative and you control the budget” has never been more applicable.

So, take a chance. Trust your talent. Take a creative journey that might involve free association occasionally. High risk could yield high reward. And it just might engage a listener enough to keep listening.

Find some examples of how I’ve done it at https://kurtkoncepts.com/wp/

Maybe we can perpetrate some of that same stuff for you or be that inspiration to inspire more folks to follow the rules of engagement.

Kurt is the President at KK Creative Koncepts. He welcomes your correspondence at .