Your Imaging is a Commercial. Get Over It.

What commercial gets played on your station the most? Answer: Your imaging -- sweepers, promos, jingles, even when it is spoken by a (presumably) human voice. Oh…were you expecting another answer? Have you ever thought of imaging as a spot? 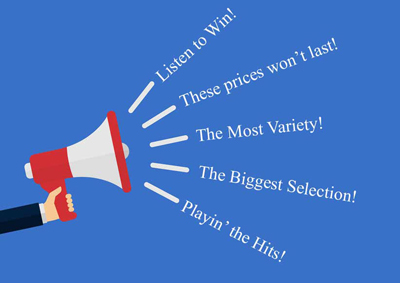 Here’s The Truth… When something (other than the “DJ” or “presenter”) interrupts the “show”, the audience perceives that as a commercial. Listeners sort of know the difference, but subliminally, your imaging is the most repetitive commercial on your station. The more you repeat it and the longer they listen, the deeper it gets drilled into their brains. But for the most part, they don’t care about your imaging -- which is A SPOT, a spot for YOUR STATION.

Did the above statements punch you in the gut? I hope so. You’re probably screaming one of these phrases at the screen or page you’re reading this on right now: “How DARE you compare MY imaging to a LOWLY SPOT!” “I’d NEVER put those two in the same category.” “Who wrote this?! Who does this guy think he is?’

Here’s more truth (a.k.a. gut punch #2): listeners are far more likely to easily recall a client’s spot than your imaging. You want proof? Just ask them. They’ll tell you.

During your station’s next “focus group” test, ask this question: “What commercials do you hear most often on our station?” Their answer will probably be the paid client ad they hear the most often, or the one that angers or “entertains” them. Some of them will name a spot that may not have aired in months, or possibly years -- you know, the one with the two talking squirrels, the funny jingle, or the repetitive (and effective) slogans.

They’re NOT going to say, “the commercials where the guy (or woman) between the songs says the name of the radio station.” Now ask these same people what their favorite radio station is…and you’re praying with fingers crossed that they’ll say YOUR call letters or moniker. They may not perceive imaging as a commercial, but it is.

How much time out of each hour does your station devote to programming elements other than music and promos -- IDs, sweepers, weather sounders, etc.? For argument’s sake, let’s say it’s 90 seconds per hour. 90 seconds per hour over 24 hours = 36 minutes per day. What’s the average spot rate at your station for a 30-second ad? (If you don’t know, ask your sales manager because you should know this.)

Let’s assume the average spot rate is $100. That equals $300 per 90 seconds. $300/hour x 24 hours = $7,200. PER DAY. That’s the value of the time that your station is sacrificing daily towards the bottom line just to promote itself. If you’re wondering, that’s $2.6 million per year (which could be wildly higher or lower depending on your format and market).

Talk ISN’T bad…as long as what the sweeper is saying is just a tap on the shoulder as to say…”remember, you’re listening to…”

So, should you write or produce your imaging differently because it is a commercial? Absolutely not. Just make sure the audience gets the message of your call letters/slogan clearly and concisely.

Promos clearly are perceived more as commercials by the listener, because they are longer and have more information. But the same rules of being clear but brief with your message applies.

On the other hand, Beat-Mix Promos are Worthless Infomercials. Is there any listener benefit to beat-mixing the top 12 or 15 songs into a long promo? Does your station sound like that 24/7? Doubtful. Do your beat-mixes have your station’s name or slogan between every transition? Probably not. Therefore, what tactical advantage does a beat-mix promo give your station? Answer: None -- especially if you have a direct competitor in your format.

Are they entertaining? Sure. They can be. But in the long run, you’re spending WAY too much time producing something that is nothing more than a barricade to giving your audience what they want to hear: THE FULL SONG. That’s why they listen to your station in the first place. You don’t need a beat-mix promo to promote the music you play. Your station’s music sweeps ARE the music promos.

It’s also nothing more than a fart in the wind. Nobody in a month will be able to recall it. They don’t care how well you can use Pro Tools or the Time Stretch plugin on Audition under some sick beat you created in FL Studio. When asked, no one in your audience will say “I love how they beat-mix all of today’s top hits together in a promo.” Beat-mixes only take time away from what the audience wants to hear.

The bottom line: Your station sacrifices a LOT of money to promote itself. Use that time wisely. Long-form “imaging” other than promos don’t really help you. Give the audience what they want to hear. Anything else is most likely a distraction or roadblock.

Tim Burt has written, recorded, and produced more than 30,000 commercials world-wide. He is a highly sought-after international advertising coach for businesses, and a public speaker for radio and television stations sales teams. He welcomes your correspondence at . For more, go to www.MarketAnything.co.

November 01, 1989 21031
It might first interest you to know that the most common piece of outboard gear being used by our subscribers is Yamaha's SPX90. Needless to say, since the SPX90 was first introduced, many other manufacturers have responded with...
Read More...
© 1988 - 2023 Radio And Production, LLC
Go to Top