For those who may not know, in 1989, Radio And Production began collecting audio from producers worldwide and presenting it on the monthly “RAP Cassette”, which eventually became the “RAP CD”. The collection of audio represents a history of radio production over 26 years and features promos, commercials, imaging and more from some of the greatest and most creative radio production people our industry has ever known. 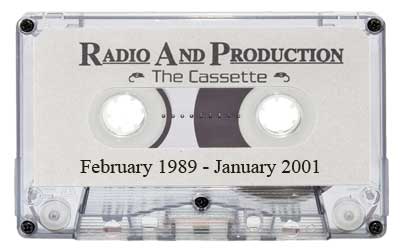 After a long task that had its challenges, the audio from every RAP Cassette and RAP CD has been digitized and uploaded for all to enjoy. The audio archives can be found here: https://rapmag.com/a/audio-archives. A search box on the page can be used to search by month or year. For example, enter ‘March’ to retrieve all of the March Cassettes and CDs, which feature the Finalists of the Radio and Production Awards through 2017. Enter a year to filter by that year, or enter ‘cassette’ to locate only RAP Cassette audio. Utilize the Google Custom Search at the top of the page to search for audio featuring specific people. For example, entering ‘john doe cassette’ will list RAP Cassettes featuring material from John Doe, as well as other hits from the search.

Take some time now and then to check out some of the audio in this collection. Whether you’re looking to be entertained or inspired, there’s plenty to get you there. And thanks to everyone who contributed to this collection over the decades, especially in those early years before the internet, before social media, before email, before MP3s. Through the RAP Cassette, those producers provided the guiding light for so many.

October 01, 1989 12204
What was once distant thunder is now a reality for digital sampling. Everything you always wanted but were afraid you couldn't afford is now available at a modest cost in an unprecedented new unit, the Dynacord ADS. The first...
Read More...
© 1988 - 2022 Radio And Production, LLC
Go to Top