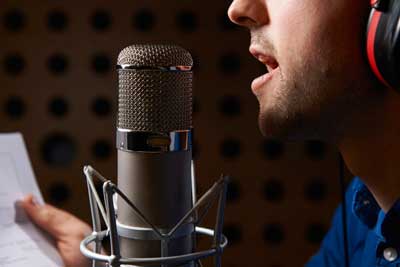 Client stories, I got a million of ‘em, we all do. Many of my industry friends end theirs with, “This gig would be great without clients!” I respectfully disagree. Without clients, no billing; no billing, no radio station. Besides, they can be so damned entertaining. For instance, have I told you the one about the guy who insisted on voicing his own ads, then asked me if there was anything I could do to his voice because he always sounded terrible on the radio? HA! Ha, ha, ha… ha. Sigh.

Do you like your voice? If so, you’re one of the lucky few. Science has all sorts of reasons why, but the bottom line is that, to your ears, your recorded voice doesn’t sound like you, and no amount of audio gymnastics is going to change that.

I’m seldom in the majority about anything but do hate my voice. Too nasally, not enough bass, unpleasant tone. And yet, I ended up in radio, in production, in voice-over. HA! Ha, ha, ha, ha… ha. Sigh.

Let me tell you another client story. Once, a client insisted that I voice all of his radio ads, refused to use anyone else. Once he made his Rep bump a schedule because I was on vacation and someone else was going to have to voice his ads -- that’s how committed he was to my voice. Frankly, I thought he should be committed; who in their right mind would like MY voice? Mind you, by that point I’d been in radio for some years and had logged hundreds of hours on-air and in the production room, but I still couldn’t shake the complete and utter loathing I had for my own voice. Hell, I’d never even met the guy, he only knew me because I did middays on the station… what on earth was he thinking?!

One day, the client’s Rep told me that his customer was coming to the station and wanted to meet me. “Lovely,” I remember thinking, “Can’t wait to meet this lunatic!” Funny how wrong we can be about people. As it turns out he was well-educated, well-dressed, well… everything. With a firm handshake he said, “It’s my pleasure to meet the voice of my business!” Me? The voice of his business? Well yes, I WAS, but I’d never thought about it that way…

“Do you know what I love about your voice?” he said. “Sincerity. When I listen to you say something, even when you’re kidding around on the air, you sound sincere, like it’s coming from your heart. THAT’S the voice I want describing my business!” HA! Ha, ha, ha… ha. Wow.

Like fingerprints, every human voice is unique… so unique in fact that some banks are using voice recognition software to replace passwords. I can rant and wail because I wasn’t blessed with deep pipes, but as the years have passed I’ve come to realize that I have something even better, a sound that nobody else on earth has, completely one of a kind.

All of that is easy to say, but harder to remember in the heat of production. After spending years hiding behind goofy character voices, well, old habits die hard. Now, there’s nothing wrong with character voices, in fact I’ve made some good coin and enjoyed some wonderful, crazy gigs because of what I could contort my voice into. As I sit here and think about it, I had kind of lost track of just how many nutty character voices I’ve done over the years, and most of them I’m fairly proud of, if only because they were less impersonations and more my own creation. Perhaps that actually does make them a version of “my voice,” give or take an accent, growl, or pitch.

So, enough about me… how about you? Where are you with your voice? Content, cringing, or somewhere in between? No matter where you are, I’d like to encourage you to give your voice a long, objective as possible listen (this includes the various versions of it for those of you who also have many voices rattling around in your head). If you don’t like what you hear, treat yourself to a list of what you don’t like… truly, this is a treat, because good things will come of it. Even if you’re one of the lucky ones who can’t smack talk your own voice, you and I both know that’s there’s something… a rough edge on certain consonants, a stumble on one or a combination of words… write it down. Here’s where the treat comes. Practice, over and over, until you’re ok with the first thing on your list, then go to the second and do the same. Doesn’t sound like a treat? It will when you’re happy with what’s coming out of your mouth.

In the crazy, hectic business of production, it’s easy to fall into the trap of being “too busy to practice” what we do. We tell ourselves, “I AM practicing as I work… who has time for more?” It’s flawed logic. In the heat of battle, you’re simply getting through the day, often stumbling through the rough patches to get the job done. That’s not practice, that’s survival, and you want and deserve more than that. Allow even a few minutes a day to focus on nothing but improving one thing on your list, truly master it, then move on to the next thing. You may never enjoy the sound of your own voice, but you should come to terms with the fact that you can make it something everyone else enjoys, and some pay good money for.