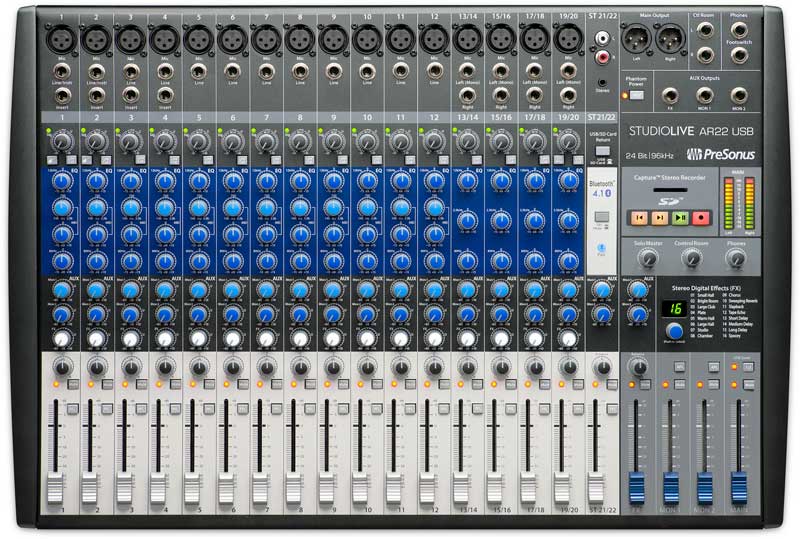 A great companion for the recording musician, the StudioLive AR22 USB mixer is equipped with a Mac®- and Windows®-compatible, 24-bit, 96 kHz, USB 2.0 audio interface that can capture all input channels and the main mix. Need to capture a quick two-track mix for rehearsal and don’t want to use your laptop? No problem: The StudioLive AR22 USB mixer comes equipped with an onboard stereo SD recorder that lets you record the main mix without a computer—just hit Record and go. You can also use the SD recorder to play up to 32 GB of MP3 and WAV files for hours of program music or backing tracks without needing a computer.

The StudioLive AR22 USB provides a flexible array of inputs and outputs. Featuring 16 Class A mic preamps and a whopping 26 analog line inputs, the StudioLive AR22 USB has all the features you’d expect in an analog console. In addition to a 60 mm fader, each of the 12 mono channels and 4 stereo channels gives you a low-cut filter, mute, pan, and solo with prefader listen. As a result, you can plug in mics, keyboards, and much more with the same types of controls found in larger mixing consoles. Phantom power can be enabled globally for use with condenser microphones.

The StudioLive AR22 USB mixer also features the unique PreSonus Super Channel, which allows you to play audio from four stereo sources simultaneously. Plug a media player into the Super Channel’s unbalanced RCA inputs. Connect your tablet to the 1/8-inch stereo input. Play stereo audio from the onboard SD recorder or from your USB-connected Mac or Windows PC. Use onboard Bluetooth™ 4.1 to pair your phone to your StudioLive AR USB mixer and instantly have wireless access to your music library for break music, backing tracks, or ear-training. Have a song you want the rest of the band to learn? Pair your phone and start rehearsing! The Super Channel allows you to play back audio from four stereo sources at one time.

Like every PreSonus mixer, the StudioLive AR22 USB is bundled with everything you need to record, mix, and distribute your music. Create multitrack recordings with one click in PreSonus’ Capture™ live-recording software, then mix, edit, and distribute from award-winning Studio One® 3 Artist DAW production software; both are included free. You also get the Studio Magic Plug-in Suite for Mac and Windows, which includes seven popular plug-ins in VST, AU, and AAX formats.

Compact and road-ready, the StudioLive AR22 USB mixer is packed with the connections and features needed to mix and record live, in the studio, and in rehearsal. It’s expected to be available early in the fourth quarter of 2017 at an anticipated U.S. MAP/street price of $799.95. For more information, please visit www.presonus.com/products/StudioLive-AR22-USB.