Women’s Audio Mission (WAM), a San Francisco-based nonprofit dedicated to the advancement of women in music production and the recording arts is presenting the first conference for women in the recording arts in Boston, MA on November 3-4, hosted and sponsored by iZotope and PRX Podcast Garage. 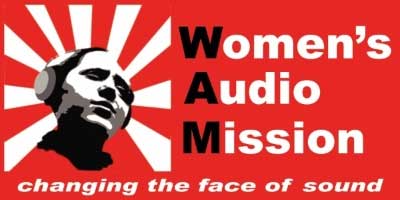 WAMCon is an interactive recording arts conference for women with immersive workshops and panels with award-winning women producers and engineers in the music and podcast industries. Women’s Audio Mission trains over 1,500 women and girls a year in the recording arts to address the critical lack of women in the audio industry (less than 5%), and will be bringing their award-winning curriculum to Boston for WAMCon.

“We’re excited to bring WAM’s training programs and an incredibly talented group of veteran women engineers and producers to Boston,” says WAM Executive Director, Terri Winston. “We’re so grateful to iZotope and PRX Podcast Garage for hosting WAMCon. This is the first conference for women in audio and the beginning of bringing WAM to other parts of the country. We’re looking forward to connecting with our East Coast members in person.”

The conference is open to women (transgender and cisgender) and non-binary and gender non-conforming individuals. More information here: http://wam.rocks/wamcon2017.

Women's Audio Mission is a San Francisco based non-profit organization dedicated to the advancement of women in music production and the recording arts. In a field where women are critically under-represented (less than 5%), WAM seeks to "change the face of sound" by providing hands-on training, experience, career counseling and job placement to women and girls in media technology for music, radio, film, television and the Internet. WAM believes that women's mastery of music technology and inclusion in the production process will expand the vision and voice of media and popular culture. For more information, visit www.womensaudiomission.org.

October 01, 1989 12204
What was once distant thunder is now a reality for digital sampling. Everything you always wanted but were afraid you couldn't afford is now available at a modest cost in an unprecedented new unit, the Dynacord ADS. The first...
Read More...
© 1988 - 2022 Radio And Production, LLC
Go to Top