The newest and hottest marketing buzzword is ‘tra-digital’, and digital (r)e-tailers and marketers had better watch out as traditional forms of media are being used in clever and far better ways to market to people as they walk or drive past a location. 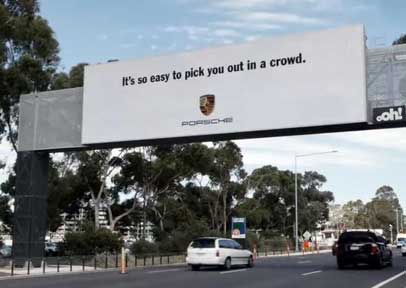 An example of this ‘tra-digital’ marketing was recently seen in Australia, at Melbourne Airport… Porche conducted an award winning campaign called ‘Recognition’ whereby, whenever a Porsche drove past the billboard, it noticed (a camera 200 metres before the sign would recognise the Porsche) and would flash a message thanking the driver for showing such great taste.

So therefore, and in these instances, the name ‘tra-digital’ equates to both: 1) a digital (r)e-tailer’s marketing method where they position themselves with a ‘real world’ presence; and 2) a real world retailer using digital technology to promote itself.

What can we in radio learn from this?

To start with, the data from the Standard Media Index (which is based on hard sales data gathered from across 15 global media markets, and is an interesting read) states that traditional media, such as newspapers and television, are declining in their share of the ‘real’ spend of advertising dollars (in Australia this was down by 24% in January compared to 12 months ago); and in radio, there was, and still is an increasing spend of ‘real’ advertising dollars (which was also a globally reflected statistic) in the past 12 months.

Radio advertising does continue to thrive and grow. Meanwhile, there is also a surprising and unexpected large growth in the aforementioned outdoor advertising industry. How large? 11% in January alone in Australia, and growing globally with big spending digital (r)e-tailers advertising on them, pushed along mainly with the increasing presence of LED outdoor displays, allowing for highly creative opportunities for clever marketers who can squeeze as much out of the limited time it takes to walk or drive past a display.

I observed one such sign for one minute and counted 6 messages featuring in a high pedestrian traffic area -- sll with very different content, colours, movement, and footage being used.

But, before I hear you cry about the high cost of such digital outdoor ‘tra-digital’ advertising, allow me to point out that both Google and Facebook spend a significant amount of their own marketing budgets on traditional outdoor advertising. In fact, they spend more on ‘tra-digital’ advertising than they do within their own digital realm. Google alone spent $2.5 million on one such campaign in New York’s Times Square.

So how does this compare to our own spend on marketing ourselves?

How many of us in the radio industry have our tired old ‘prize cruisers’ sign written with static station logo, sponsors and slogans? (Imagine a screen instead installed on the side or in the rear of the cruiser, containing any amount of images and messages, constantly changing and being able to be updated for specific events.) How many of us have old, sun faded and weather worn outdoor signs at the station, torn flags at events, tired posters and banners at OB’s? And, if we have used billboard space, do we even know where they all are, if they still exist at all? (An asset analysis of where your old signage is, and its condition, might be very revealing.)

The costs to produce your own in-house version can start out low, as in a couple of hundred dollars, with something as simple as a TV screen displaying graphics on a slideshow loop. To the more costly and complex interactive signs which would display the currently playing songs, who the talent is on-air at the moment, video feed from the studio, or footage from the last OB, current news, weather and traffic info – a virtual, updatable feed of information, all branded with your station’s ID and logo.

At our station we use two large screens in our reception area to market our AM and FM stations separately to visiting clients and listeners. Both play a loop of slideshows for shows, segments, on-air talent, advertising, marketing, competitions, prize cruisers, and more. Each are created as 10 to 20 second video files (around 20+ on each screen, which change as needed and seasonally) and played in a constant loop all day. We also have a very, very large screen at our local train station (approx. foot traffic is 35,000+ per weekday), which plays a variety of video files promoting both radio stations, plus they can also contain advertising that we have sold to our clients.

These separate video files/slideshows could also (and have been) shared on the stations social media, or website, and if your video is clever enough, it could maybe take off as a viral hit.

For the budget version of a digital billboard, you can do what I do and create basic videos with the software Paint Shop Pro and Pro-Show Producer. For a more complex video I use Adobe Photoshop and Adobe Premiere.

The videos are then placed on a USB thumb drive and plugged into a media player box, or into the TV directly. (For some examples see our Blog 4 Clients Post HERE which contains video files from each station. Some are simple slideshows and the others are more complex in nature [note that all of them contain NO audio]. The post also contains an abbreviated version of this article, targeted at small businesses and how they can do this themselves.)

But I digress, we do need to market our stations. How we do this is going to have to change. From ratings periods to new talent announcements, and more. It’s how we to choose to promote to people who might not be listening that is changing, and traditional paper and glue poster billboards is not going to appeal to our audiences, neither are the old school newspaper ads.

Potential listeners require their attention to be grabbed, and these days it appears that the shorter, and more creative it is, the better the conversion rate is.

It should be noted that the outdoor advertising industry refers to its marketing methodology on a whole as ‘Out Of Home Marketing’, and covers everything from digital billboards to signs, seats, and interactive spaces used to try to gain viral exposure. The name ‘tra-digital’ in this article reflects the singular interactive/LED/digital billboard.

Earl Pilkington works as a copywriter for West Coast Radio in Western Australia. He has mentored on-air talent, audio producers, journos and others inside and outside the industry, including TV, newspaper, voice talent and students. Earl welcomes your correspondence at theboss@shedloadofgeeks.com.

May 01, 2003 7704
by Steve Cunningham It’s been more than three years since we last sampled the software plug-ins from Waves Ltd., arguably the “Rolls Royce” of software audio processors. The company has been busy in that time indeed. Waves have...
Read More...
© 1988 - 2023 Radio And Production, LLC
Go to Top