The Timothy Letter: Are You Talking to Me? 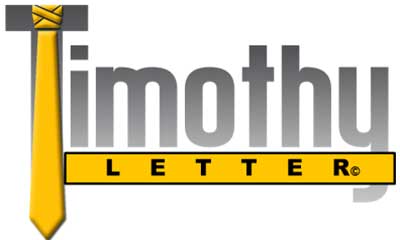 In September of 1982, song writer Thom Schuyler penned a legendary song that country singer Lacy J. Dalton recorded. It was titled “16th Avenue.” The single hit number 7 on US Country Charts. The track is about struggling singers giving up all they have to chase a dream of becoming the next big star – and making it to the famous 16th Avenue recording studios in Nashville, Tennessee. These lyrics made the song:

Ah, then but one night in some empty room
Where no curtains ever hung
Like a miracle some golden words
Rolled off of someone's tongue

These lines are powerful and bring to life the significance of coming up with the right words at the right time. How curious it is that a song from so many years ago still resonates with truth and relevance? Coming up with the right message to the right audience is how we make our living. All of us have written “golden words” that rolled off the tongue. Those words were part of a creative process. Ingenious and powerful words strung together that got results for our advertisers – this is our craft.

It was 6 years prior to the recording of “16th Avenue” that Martin Scorsese and Paul Schrader created a blockbuster movie. This film was memorable and it seems will stand the test of time. You see, one of the reasons for the success of the movie was its relatability. At one time or another, we all could relate to Taxi Driver, Travis Bickle (played by Robert De Niro).

Amidst the mental breakdown of Bickle, perhaps the pinnacle of the picture, he stares across his lonely room and speaks some “golden words.” Nearing the end of his wit, he whips out a gun and asks the question, “Are you talking to me?” He begins to practice different stances; preparing for an all-out battle between him and the city. He repeats the question several times.

Before he skins his smoke wagon one last time, he repeats the now famous line:

Although Taxi Driver came out more than 40 years ago, you can still ask the question, “Are you talking to me?” and this movie will immediately come to mind. Wow! Those are some “golden words.” The lines worked and worked perfectly; just like a hand slipping into a glove. It was an effective message that resonated with those of us (all of us at one time) who have been close to a mental breakdown. The message worked.

This question by Travis Bickle is the same one asked by your audience in the first few seconds of hearing a radio commercial. They want to know right away, “Are you talking to me?” If not, you’ve lost them in mere seconds. Keep Bickle in your mind each time you begin writing a script. If you’re not talking to them, they will move on. Talk to them. We work hard to come up with the right message for the right audience. Scorsese and Schrader hit the nail on the head with their message in this scene. Your audience must always feel that you are talking to them.

When writing your next commercial script, it’s important to keep the following things in mind – before your pen touches the pad (or your fingers touch the keyboard):

Know your audience. Your clients are depending on you to get an effective message to the right audience. How old is your desired audience? Males/females? What do they do for fun? How much money does this group of people make? More importantly, how much money do they spend and what do they spend it on? You can do a ton of free research on-line by reviewing surveys and statistics.

Knowing the objective. Are you simply writing copy to make an audience aware of a company? Perhaps it’s a particular service or product that your client wants your listeners to know about. Is this going to be a branding commercial/campaign or will it be a call-to-action message? Before beginning the brainstorming or writing process, you must make this decision (if the client hasn’t already made it for you).

Talk to your audience. How does this particular group of listeners talk? Don’t use big words for a young or uneducated group. Talk clear and direct. If your audience consists of professionals or executives, perhaps bigger words or even shop-talk scenarios and relatable lingo will work best.

Make a grabbing first impression. Today if you don’t catch the attention of your audience with the first few seconds of the commercial, say goodbye. Their finger is already on the button; make them stick around for the remaining 25 seconds. Give them a reason to want to hear more. Your first line is the most important line. Blow them away with curiosity; make them listen.

Make your point several times. It’s said in speech writing that you’re supposed to 1) tell your audience what you’re going to tell them 2) tell them 3) tell them what you told them. Repeat the message 2-3 times. They won’t hear it the first time – I promise. I’m not a fan of putting phone numbers and addresses in commercials. It’s a waste of valuable seconds and most importantly, money. In today’s day and age everyone has a phone and immediate access to the internet. If you impress them, they’ll google your contact information. Don’t waste your clients’ money.

The next time you’re struggling to come up with an idea take some time away from the project. Find small tasks and direct your attention to them. Let the message flow naturally and come easy. Don’t have a mental break down and try to take on your city with violence and utter carnage. When the time is right, pick up your pen, and put the gun down.

Tim Hopwood is the former syndicated radio host of The Catfish Country Jamboree, and current moderator of The Timothy Call, a weekly teleconference on creative thinking and skill building for professionals in the radio advertising business. For more information on joining the teleconference, email or call (844) 467-7971.

May 01, 2013 11578
by Jerry Vigil With all the multi-effects processors and multi-dynamics processors on the market, it's difficult sometimes to find one good piece of gear that will handle one small but important task for you. If that task calls...
Read More...
© 1988 - 2022 Radio And Production, LLC
Go to Top