Well this is certainly not a "for dummies" type article; we will not be coming at the subject as if it were a "lab test" either. The answer lies somewhere in the middle. But radio production folks like us are still somewhere at least slightly above the level of appliance operators and generally speaking, have a good set of on board monitors, that is, "in the trenches" experience-acquired calibrated ears from doing lots and lots of red hot spots.

Imagine doing major studio quality audio recording anywhere with a device scarcely larger than an iPhone that gave you state-of-the-art results on everything from live music, sound effects, voiceover and more!

Most of us carry a smartphone… In broadcasting, the trend seems to skew towards the iPhone because of the apps that work well for audio and editing. Recent names that come to mind like Audacity and Twisted Wave fill the bill better than anything else for studio quality recording away from the studio when voice tracks or auditions have to be done for the ever increasingly insane deadlines as never before.

And then a device that surprises us hits the market... like the Tascam DR-100mkIII. Simply put, it's just a better way of doing stereo recording. The standard for broadcast these days is 44.1, encompassing CD recording, broadcast automation, podcasting, MP3 etc., and for discriminating audio in a handheld device, it's virtually unheard of up to now for a device in this class to be able to record at 192 kbps. The mkIII does it well and with a nearly undetectable noise level!

Its physical footprint is comparable to that of the iPhone 6+ or 7, but much thicker. Don't forget that the body accommodates a pair of XLRs (the mic connectors, not the Cadillacs!). These 3-pin jacks are dual purpose... they also accommodate a standard ¼” phone plug for line in or low level from an instrument. 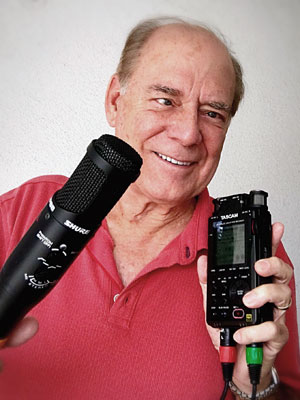 So why would you need this kind of quality for broadcast? For that matter, why would the average Jack or Jill need everything that's available in something as deep as Photoshop? I'm often reminded of having a little four cylinder engine in a coupe a few years ago that could barely get on the freeway, so my foot was always on the pedal and I rarely got more than 15 miles per gallon. When I moved up to an eight cylinder car, for some reason (wait... you'll see), I was able to get 25 miles per gallon because the engine was just "loafing". You might also relate to power amplifiers in the studio… An underpowered one distorts when you have to turn it up to the point that is satisfying. A higher powered amplifier just "loafs along" at higher levels with less distortion. There's a lot of that advantage in having superior capability in your recording device but not necessarily having to use it all. Does that mean it's overkill for broadcast? Yes, possibly. But to those of us who may want to do the occasional live music recording, or in today's production environment are finding it necessary to record many of our own sound design elements and sound effects, it's almost imperative. A straight voiceover? 44.1 is just fine thank you very much. I will argue that all the way down the road. Strings? I want my 192.

This recorder is intuitive for the most part but can take you down the wrong path if you do not understand the labeling of its menus, and they are somewhat misleading. Getting started was a little difficult because I wanted to use an MS stereo microphone external to the recorder, but selecting "external" was the incorrect choice on this menu. (See pic). "MIC", although counter intuitive, is the correct menu choice. We're told this may get updated on future units.

Most of us will find that the headphone monitor amplifier output is insufficient to drive most headphones in use today, although there was adequate volume for playback in using a simple earbud like those furnished as standard equipment with every iPhone. I found that this was truly the only negative shortcoming once the menu workaround was accomplished.

Back to the subject of intuitive… Setting levels can be done by placing the recorder into "record pause" mode,  "arming" and then going into record by hitting record one more time. One would think that the pause button would allow you to pause recording because it is labeled "play/pause" but not true. This function is reserved strictly for pausing during the playback mode. A pause during RECORD command is achieved by hitting the record button a second time -- Not very intuitive, but once you get used to it, it's not a problem.

The unit does not come with a memory card, which would be so cheap for them to have added, and it would've been convenient to be able to record right out-of-the-box, as the unit has no onboard memory of its own. Most of us have an extra card laying around that we can plug into it right away so that was of minimal aggravation. While it doesn't make the company look cheap, it's just kind of inconvenient. Just a suggestion, but as a user, I know I'm right when I say I speak for all of us on this one. What sounds like a minor annoyance is just me revealing the practicality of what to expect, so you are not disappointed with this otherwise fantastic unit.

Some of the features may not be quite apparent at first buff, because even though the manual that is included looks quite extensive at 100 pages, only 12 of them refer to the operation and lack a bit of clarity, so it will be imperative that you download the online manual to handle the rest of your needs as well as troubleshooting.

Let's now briefly go over some of the stunning features. This is a linear PCM recorder that supports 192 kHz/24-bit resolution. It uses SD/SDHC/SDXC cards as recording media. It supports an internal set of microphones -- actually two types of stereo microphones, directional and omnidirectional -- that allow super high-quality stereo recording.

The input jacks for external mics are the newer type XLR/TRS combo jacks and they support a +4 DBU line level input as well as +48 V switchable phantom power.

An important feature that used to be a given in the analog days is a power on recording function that can start recording immediately after starting up. Think of it as a nearly immediate boot up in the computer world.

And a feature for you guys that still think that it's important to bang the meter into the red like in the old days… Don't forget when you get to zero level in digital, that's a full bit set. It doesn't "go to 11" or "+3" anymore. But hark! Look what Tascam's giving you in this unit: A dual level recording function so that you can record two files simultaneously at different levels without engaging the limiter if you don't want to. This assures your ability to be able to record with confidence without distorting, because if you happen to hit a peak, the second track most likely will not have gone into "the red" since it is your backup "B roll" in effect, at a lower level. 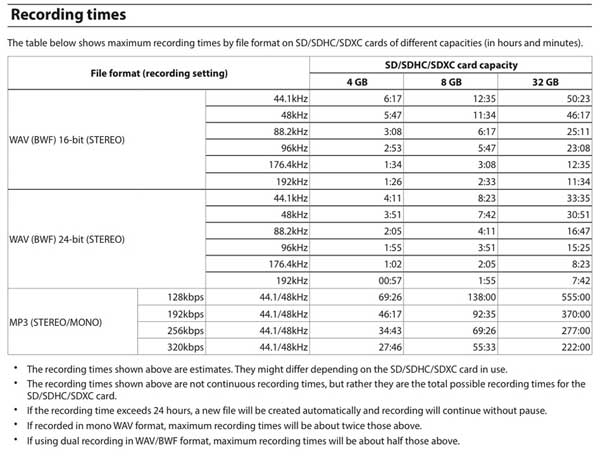 Recording times are clearly going to be a little shorter if you're putting a drain on the batteries by using a condenser mic that requires external a 48 volt supply to it, in this case by the recorder itself. However one of the great features of this unit is the continuous operation capability for extended times made possible by using the built-in battery and AA batteries together. (See chart of recording times under user chosen variables).

Our little "road test" comes with some audio for you to check out. It’s the last cut on this month’s Soundstage. It is comprised of six samples. First is a demonstration of action stereo of a speeding train passing by left or right at 60 miles an hour at a distance of 10 feet away. The next 4 segments are short voiceover pieces starting with a Shure external VP-88 stereo M-S mic, Shure with the limiter engaged, internal cardioid and finally, an omni sample. And the file wraps up with an a cappella live choir group.

Okay kids, now for the real reason that I love this machine so much… It makes recording MS stereo a breeze. Without getting too technical, I'll give you the layman's background and sort of a snapshot of the state-of-the-art "where we are" in what we hear in most recorded releases today.

Usually in a modern session multitrack, whether it's Pro Tools or anything else that will handle the tracks, it's not uncommon to have 6 to 10 microphones on the drums alone. Another track might be dedicated to the lead singer, several mics for the rhythm section, horns, strings, keyboards etc. After this is all recorded, we decide where in the stereo panorama we would like each part to exist. This all sounds fantastic when it's mixed, but none of it ever really "happened" that way. We constructed and defined that acoustic space in our heads to make it sound good to our ears. But since there was no actual performance with everyone playing together in different positions on the stage, what you have made was in the land of the mix, a phenomenon that, while fantastic, is a creative endeavor. But that is what we have become accustomed to. 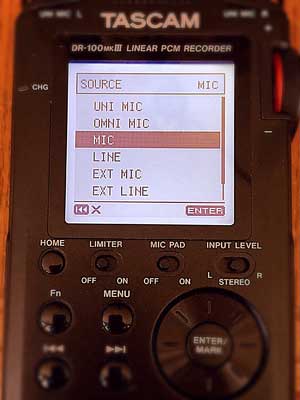 Now, if we are to take a live performance, such as a choir with many many voices and faces spread left to right,  and record them with an overall perspective that is true to the original in its position in the new stereo panorama, that would be a wonderful experience to behold because you could probably close your eyes and almost see every face where it was in the original. Not that easy to do because multiple microphones cause phase anomalies that prevent actual rendering of the original.

Enter a stereo microphone technique called "M-S Stereo". This is a process where the left channel is L-R and the right channel is L+R, so that when the two signals combine they can be a perfect mono or anything in between if you want to spread it for an extreme stereo image. This is particularly great when recording for video or film because if you have a very wide shot, you can move things around after the recording is done, and in post change the separation to match the width of the picture, so to speak. If you have a tight shot of perhaps a talking head or several people in a smaller room, you can vary the sound to match the picture in terms of stereo width. That's right… after it's recorded, in post. How is this accomplished?

The L-R, or left channel, is fed by, typically, a cardioid microphone pointed directly at the sound, where the right channel is fed by a microphone whose pattern has been adjusted to a figure eight pattern with the null facing the sound. The easiest way to decode the result, rather than using an MS decoder box costing in the hundreds of dollars, is the MS decoder furnished free in Adobe Audition or even in the earlier versions of Cool Edit.

Is the new Tascam 100mkIII a necessity or a frill? The real answer is that it's a competitive advantage that will push open the path to your passions and provide you with a tool that you never had before for freeing up your creativity on a higher level.

Don Elliot is a partner at Levine/Schwab Broadcasting in Los Angeles. He welcomes your correspondence at .