► PreSonus® has released Studio One® 3 Prime, a free, entry-level version of its powerful yet easy-to-use music recording and production software for Mac® and Windows®. The company concurrently released Studio One 3.0.2, a free update that provides numerous enhancements and usability improvements to all versions of Studio One 3. Although it is free, Studio One 3 Prime is not a demo and does not time out. Rather, it is a feature-rich digital audio workstation that includes many of the key features found in Studio One 3 Artist. Studio One Prime Highlights: Studio One Prime does not time out, feature a nag screen, or limit the number of songs you can create. Record and mix with no limit on the number of simultaneous tracks, plug-in inserts, or virtual instruments. Get sounds with the new Presence XT sampler featuring a 1.5 GB sampler library. Sweeten your mix with nine PreSonus Native Effects™ audio plug-ins that cover all the bases. Access the power of a real DAW with real-time time stretching, resampling, and normalization; single and multitrack comping; multitrack track transform (advanced freezing), and Control Link controller mapping. This combination of features and ease of use, and great sound quality makes Studio One 3 Prime a perfect choice for beginning producers and composers, music students, and anyone who simply wants to get acquainted with Studio One’s superior workflow on real projects. Studio One 3.0.2 Highlights: Studio One Prime is built upon the Studio One 3.0.2 codebase, which was simultaneously released as a free update to all registered Studio One 3 customers. Studio One 3.0.2 introduces new functionality and addresses usability issues reported by customers after the launch of new version 3. Areas of improvements include multi-touch implementation, Song Page track focusing, new shortcuts for the Arranger track, and Audio Pool UI enhancements. Studio One Prime is available as a free download at http://studioone.presonus.com.

► Steinberg Media Technologies GmbH released the seventh iteration of Nuendo, the advanced audio postproduction system that offers dedicated tools and capabilities for movie and television audio post-production companies and video game sound designers. Introduced in the millennial year, Nuendo has undergone an unswerving development to benefit from native processing technologies and offer a flexible working environment highly regarded by many professionals. Its bespoke audio and surround tools cater to the requirements of the audio post-production industry, making Nuendo the centerpiece of many studio facilities around the world. Based on the growing demand from the game industry, the time has now come for Nuendo to extend its scope of application to game audio. Nuendo 7 introduces Game Audio Connect that allows for direct transfer of audio assets to the Wwise audio middleware solution by Audiokinetic. For sound designers and those dealing with a large number of audio files: the new Render Export feature exports selected audio files to a specified destination, while Render In Place bounces tracks conveniently within the project. Sound editors will appreciate ReConform, which follows changes in picture edits and automatically amends the audio projects appropriately. New to Nuendo 7, the VCA faders assist in creating complex mixes for film and TV projects, facilitating advanced automation workflows by merging the automation curve of a VCA fader with the automation curve of a controlled fader or fader groups. Editing enhancements include frame rate support of 50 FPS and a new timecode entering scheme and automation curves which follow the trimming of events. The redesigned Track List and Inspector delivers improved legibility while the new VST Rack Zone provides dedicated real estate for MediaBay and the VST Instrument Rack within the project window. The Nuendo 7 full retail version is available from resellers and through the Steinberg Online Shop. The suggested retail price for Nuendo 7 is 1,799 euros.  www.steinberg.net. 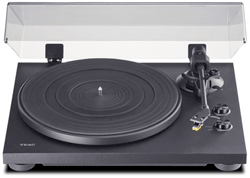 ► TEAC has introduced the TN-200 belt-drive turntable for music fans who want to enjoy the full range of vinyl classics and reissues. The TN-200 includes a built-in preamp providing line outs and a USB out for connection to almost any sound system. The USB output can be used with recording software to archive your vinyl collection or add it to your mobile playlist. The belt drive motor on the TN-200 reduces vibration for more accurate sound than DJ direct-drive turntables. An aluminum die-cast platter and anti-skating system provide a solid foundation. The high-performance, upgradable MM cartridge captures every detail on your record, and the static balanced straight tone arm ensures clean playback. It’s all housed in a handsome case with a flat black finish to fit any décor. 2-speed (33-45RPM). www.tascam.com.

► At IBC2015, NETIA will highlight new product features that enhance the flexibility and reliability of multichannel radio playout and new capabilities that enrich multimedia production, as well as mobile and remote production workflows. NETIA will feature the integration of its multiple-device interface for audiovisual media management with its well-established Radio-Assist™ radio automation module via a secure, cross-platform, Web-based interface. The portable, lightweight Web-based interface not only enables convenient content editing and repurposing of professional branded multimedia, but also automates publishing to any platform. With this tool for multimedia content creation, journalists and field staff can use virtually any mobile device (laptop, tablet, or smartphone) and operating system (iOS, Windows®, and Android™) to gain remote access to the content and subsequently search, browse, ingest, and edit video and/or audio; segment a video; and then export and publish the media on any CDN platform. www.netia.com. ►