‘LESS IS MORE’… We have all heard this saying many times in this business and many of us use that practice in our work every day. It’s good to know that a saying used in a poem from 1855 is still being utilized and practiced today.

This month we take you to Western Australia to talk with commercial producer Tim Hammond. Like many of us, he worked through the ranks producing community service announcements, panelling live shows and working sound for live TV for a youth network. He started a course at TAFE for live and studio sound and learned Pro Tools and the tech side of sound engineering. He started emailing around to different radio stations looking for a mentor and started learning the black art of imaging from Allison Rasmussen, an Imaging Producer in Townsville, Queensland. After a lot of back and forth, a job popped up as a commercial producer in Bunbury late 2013, and he jumped at it as one of the two commercial producers for HOT FM and Radio West in WA.

When I asked Tim to describe his creative style he response was pretty clear and precise, “Creatively I like to work fast and lose.” I like that and it reminds me of my own style. Once the idea or concept is brought to life and the map is drawn out, I can’t wait to get started so I can hear the final product.

“Sometimes I think the trick is not to know what to put in but what you can leave out.”

I know that as producers and studio geeks we all like to play and use all the bells and whistles every chance we get. But what happens when we are faced with a script that requires minimal to no production? More than a couple of times Tim says he has read a script and thought, this don’t need much if any production magic. A perfect example for him was a commercial about Christmas booklets.

“I just set up two mics, one for the VO talent (the fantastic Daniel Leach) and one for a bin I put in the room. I handed him a bunch of old scripts to throw out and recorded the commercial in one take. Sounded great!”

Another great example from Tim is a commercial he did for Shire of Dardanup, a spot he said was one of his favourite to produce and this month’s featured spot on the Producers VU. [Normally, you would hear the audio on the Soundstage, but because of the Awards, use this link.] Rather than the usual lay down a VO and throw in SFX and music from different sources, this was recorded all in the studio live. Tim says that not only does it make the performance a LOT better having them in the same room, it sounds a lot more natural.

“We were going for a natural sound above all else for this commercial.”

For this spot he planned to set Dan (the talent) up on one mic and have another pointing at a table a few steps back from him. He hit record on both and called Dan’s phone while he was in the studio. The mics were set up for the best off axis rejection on each of them so the bleed through wouldn’t be too much. Dan gets a call in the studio while going through the script, Tim got him to read through the script and hopefully the call would connect at the right moment. Turns out its tough for that to happen so Dan would read up to his cue and then just repeat the line until the call connected, then he would react naturally to it. The second mic was there to pick up Dan when he walks off mic, and also to get a good recording of the phone when it goes off for the second time.

“A very simple commercial to make once I had recorded it… Two full takes of the script was all it needed.”

On editing, if there were two people talking, he deleted the audio of the opposite mic when the other talent was voicing to make it a lot cleaner to hear. He then decided that it sounded best a bit rougher with the slight echo/room tone with the two mics so he left them in. It was just a case of having the two channels grouped so he could cut them as if they were a stereo track while still being able to easily change the level of each and EQ. 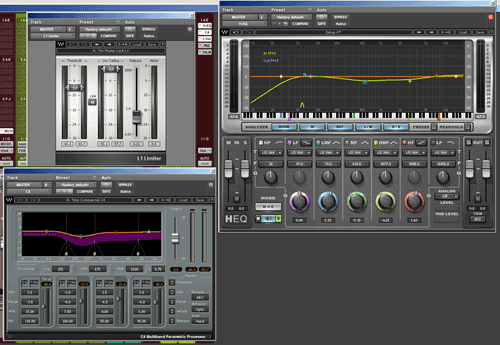 Don’t let Tim’s unique approach to production in the above example make you think that he is not a studio geek like the rest of us. Tim is well versed in all the toys we all like to use. Pro Tools is his weapon of choice for production although he does use Audition for a few specific jobs like phase cancelling out of VOs in jingles and removing noise. He has all sorts of tricks he likes to use in the studio and is happy to share them with us. He built up a small library of effect chains that he likes to use and saved them off as individual presets in Pro Tools so he can import them into a session that needs it rather than having them clutter up his default session. 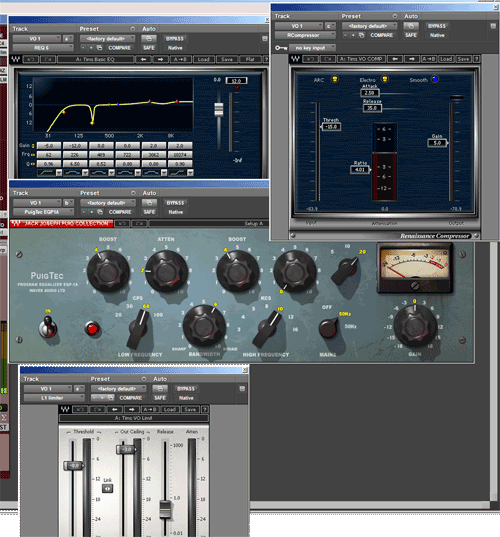 Like me, Tim is a huge fan of the R-series by Waves. His default VO Channel is an REQ, PUIG TEC EQP1A, RComp and L1 Limiter. He likes to use the REQ as a way to clean up and shape the VO before it goes into the PUIG TEC for a little boost where it’s needed. Then it’s on to the RComp to smooth it out before the L1. He runs everything into Aux Tracks, so all VO to one, all music to another, etc.

“This is just a cosmetic choice more than anything else so I can get a good idea of what each element is doing and rough pre master levels.”

His favourite little trick to make a commercial or promo is to run a Mid Side EQ over the master bus -- it has the added benefit of squeezing a bit more headroom out to the track as well, says Tim. He uses the H-EQ (a multiband EQ) in Mid Side Mode to scoop out some of the lows and a bit of the mids of the side to give the center image a bit more space.

“I find it clears things up a bit, and because I’m only taking out of the side it’s not effecting the majority of my VO.”

Production as a whole to Tim is just about adding a little personal flare. He also likes to hear different styles of production from different people when they develop a ‘sound’. It adds a bit of spice and variety and means we can learn so much from each other, says Tim.

I have to say that I’m very impressed with Tim being that he only started a short time ago and admire that he has put great effort into learning and perfecting his craft. You can tell that he is anxious to take direction and learn from others. He has great knowledge of all the production tools and technology available to him which shows in his work. I love when producers take that extra step to bring their production to a different level.  Whether it’s doing a commercial live in the studio in one take or taking an old phone and rewiring it, these are just a few examples that Tim uses to make his work unique and effective.

Now it’s your turn. This column is truly your column and provides all of us with helpful hints and ideas. Send me your stuff at . It doesn’t have to have all the bells and whistles, just a spot on which you did some good work and would like to share.  Make some notes about how you produced it to keep things fresh in your mind. And feel free to drop me a line with the questions or comments.