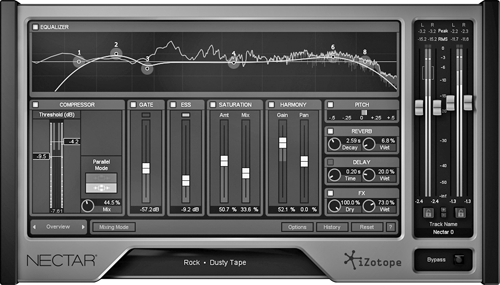 Disregarding the Breath and the offline Pitch editing separates, Nectar still presents itself as a single plug-in window, this time with a slightly larger, redesigned graphic interface that bears an obvious resemblance to iZotope’s Ozone 5 and Alloy 2 all-in-one processing plug-ins. Though it looks darker, with the rather garish orange color found in the previous version having been replaced with a crisp bronze-colored layout, Nectar 2 remains easy to navigate, since most of the text is white on a very dark grey background. However, iZotope have succumbed to the temptation to make just a couple of things in the meter section black on a dark grey background, rendering them almost invisible under anything other than ideal viewing conditions. I cannot tell you why the graphics folks responsible for software user interface colors are currently infatuated with dark markings on dark gray and black backgrounds, making those markings nearly impossible to read, but I can tell you that my eyes don’t like it one bit.

Aside from locating the spectrum analyzer/EQ display at the top of the window rather than the bottom, Nectar 2 actually works much the same way as before. A browser is used to select presets from drop-down menus classified by musical genre, and there are over 150 new presets in version 2. As with the previous version, a large number of “macro” presets can be recalled by the user and then adjusted in an Overview mode using a manageable number of controls, making it well suited both to professionals who need results in a hurry as well as those less-experienced users who are less confident regarding their processing skills.

While the revamped layout is simpler and clearer, not much has changed within the UI of the Nectar plug-in itself. All the modules are located on the left side of the interface and the top-to-bottom orientation denotes the signal flow of the audio. All modules can be placed anywhere in the signal flow, with the exception of the Pitch module, which must always be first. Every module has an enable/bypass button.

Every module has a window at the top of the interface that offers a visual representation of the audio, as well as the action of the process(es). For example, in the Gate module shown, the waveform and the gain reduction trace allow you to quickly see where the gate opens and closes. Other modules will offer similar visual feedback. At the right of the interface, you’ll find the input and output faders, along with very tall VU meters.

MODES FOR SIMPLIFYING THE COMPLEX

Within each module, each preset calls up the required combination of the individual processing sections and their settings. For example, the simplified controls in Overview mode (the Overview button is in the lower left corner) let you switch individual processing modules on and off and adjust key elements of the sound. So, when in Overview mode, a single slider might actually adjust several parameters behind the scenes, and the controls are often given more general and less technical names for the uninitiated. So instead of being presented with a shelving high EQ, for example, one might tweak a control called “Sparkle”. Audio engineers will likely find these labels cringe-worthy, but voice actors and other relative noobs will probably understand them straightaway. And good for them. In any event, nearly all of the controls are larger and offer a finer degree of control than was the case in Nectar version 1.

Clicking on the Overview button itself toggles the controls to Advanced mode and removes the training wheels from the user interface. Advanced mode provides access to the individual controls of each section in about the same depth as you’d expect in a conventional plug-in. The various processing modules can also be reordered by dragging and dropping to create a custom signal flow in Advanced mode, while in Basic mode all you can do is switch individual modules on or off and adjust the basic front-panel controls. The lower DSP, lower-latency Tracking mode has been retained as an alternative to the Mixing mode, with the latter using look-ahead where necessary to fine tune the processing (at the expense of slightly higher latency). Metering is included for the inputs and outputs along with level controls as before, but if you already own iZotope’s Insight metering plug-in, it can also be displayed from within Nectar 2.

April 01, 2003 6588
by Steve Cunningham When it comes to production facilities, space really is the final frontier. This is especially true if you’re setting up a room for yourself outside the station — maybe you’ve decided to take on a little...
Read More...
© 1988 - 2022 Radio And Production, LLC
Go to Top