The Producer's VU: Bear - Tee Off With Jess Promo

‘The road to success is always under construction’
- Arnold Palmer

Tiger Woods? Arnold Palmer? Golf quotes? Sure, why not. It will be clear by the time you finish reading this article.

This month we’re taking a trip to Bell Media Edmonton where Gary McClenaghan has been the Imaging Director for two years. I really like the concept of having an ‘Imaging Director’; it is an important role a radio group should have. Why? Because it lets creative types such as Gary focus on doing what he does best and that’s branding his stations. Gary is also a freelance Imaging Director for Benztown Branding. He’s a studio geek like the rest of us and uses the age old art of ‘Theatre of the Mind’ in his work, which you are starting to hear less of these days. Maybe it’s because we are all wearing so many hats and just don’t have the time to write and produce pieces that require much thought and creativity. Thank goodness that’s not the case at Bell Media where Gary likes to sit back in his office-apartment-studio and come up with funny ways to promote a Golf outing.

And that’s where this article starts to gain momentum and the golf quotes start to make sense. The Producers VU is about getting insight about the people who make great audio and going behind the scenes with the producer and picking their brain.

The piece we are going to spotlight this month is a promo Gary did for midday girl Jess at ‘The Bear’. The promo was to solicit listeners to golf with Jess and a golf pro. So Gary did what any producer would do, booked a tee time and hit the links to do some ‘on the job’ research! I haven’t known Gary all that long, but chances are he submitted an expense report for the golf outing as well. I would.

When Gary isn’t taking field trips to golf courses to get inspired he falls to the talents of many. He enjoys having a few people come in the prod room and shoot around ideas and scenarios for upcoming pieces. Like most, Gary does have to deal with scripts written by the PDs and/or promotions department ensuring all “needed” elements are there, as well as adding in any initial ideas they have. He then edits based on his production technique and comedic timing, adding in anything he thinks is funny or sometimes just simple direction for the voice guys.

“I picture myself reading the script as them, with each of their unique personalities in mind including delivery, cadence, and sense of humor…”

Gary’s studio consists of Audition 3, Waves plugins, a couch for brainstorming meetings, and multiple monitors. He also has general necessities to live there on the weekends should his wife kick him out. Like most of us, Gary has his favorite effect, a 2K EQ he made with the WAVs REQ.

“I am a fan of the REQ and spend many a day, trying to find new EQ’s to change up my VO as much as possible.”

For this promo, Gary used station voice Jamie Watson. Gary says he likes to process each VO guy differently, but gives the most bump to Jamie. He also likes to apply fx directly to files, not to tracks.

You can view his VO chain in the pics. The chain is in this order:

Next a EQ: This is the EQ from Wavs REQ-2

Then HARD LIMIT of -3db. 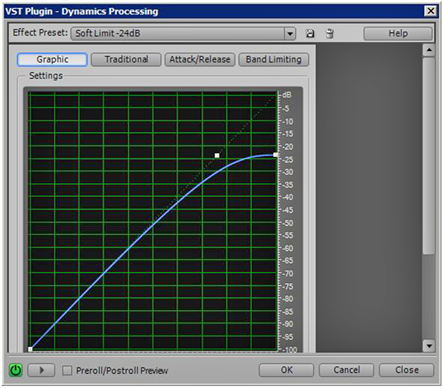 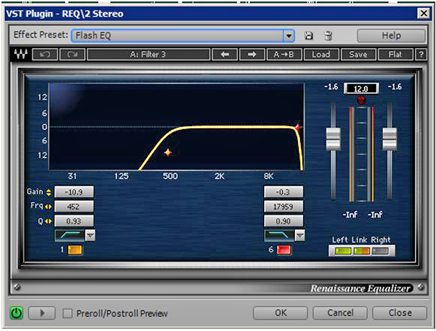 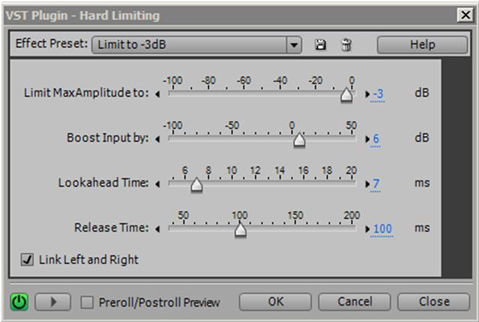 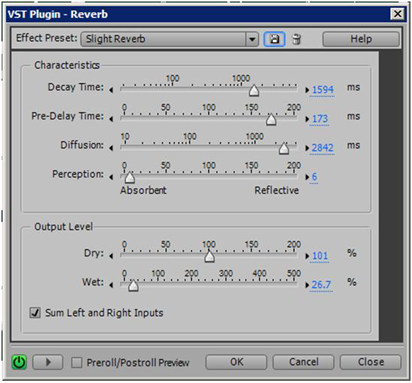 Keeping things simple, yet funny as hell is Gary’s belief when it comes to producing.

“I believe a great promo starts with a great concept and script, and any time I can build any type of scenario, that is where my true over production lies… everything else is just icing… and too much icing makes you fat.”

The Golf promo needed voice guy Jamie to give a regal delivery that served to build up the splendor and royalty that is the overall image of the PGA. Then, hit ‘em with the reality of golf for the rest of the populace. In the scenario, he panned Gerry and his club off to the right to sound like he was actually in the bush, He muffled him slightly and kept his levels lower than his VO. He then panned himself off to the left and put a 2K EQ on both VOs because that’s the fx he always use in a stop down.

“It has a Raw sound about it, that makes it pop and has just enough dirt in it to sound weaker than real world speak.”

Take listen to Gary’s golf promo and hear theatre of the mind at its finest on the RAP CD!

Now as far as the golf quotes in the beginning of the article, I think they are starting to make sense aren’t they? If not, then read them again and see if you can make the connection.

‘The road to success is always under construction’- Arnold Palmer

In my opinion Gary is a true producer that really enjoys what he does and is darn good at it. He likes to keep things simple technically and uses the influences of John Frost and Will Morgan. He seems to be a guy that likes to learn about his craft and continues to fine tune it. I respect that he actually went to the golf course for inspiration and you can hear it in the promo we are featuring this month. He seems to really enjoy the creative process and strives to make his work unique, funny and well perceived.

I look forward to hearing more from our friends from Edmonton!

Now it’s your turn. This column is truly your column and provides all of us with helpful hints and ideas. Send me your stuff at vu.rapmag@gmail.com. It doesn’t have to have all the bells and whistles, just a spot on which you did some good work and would like to share with the masses. Make some notes about how you produced it to keep things fresh in your mind. And feel free to drop me a line with the questions that run through your mind as you listen to CD.

November 01, 2007 9595
by Steve Cunningham Fostex has always produced high-end field recorders, beginning in the early 1990s with its timecode-capable PD-2 portable DAT recorder. The PD-2 and its successors are still a staple among sound mixers...
Read More...
© 1988 - 2023 Radio And Production, LLC
Go to Top