Production 212: My Field of Dreams

I got an email while I was on vacation in July from a young, new producer/VO artist in the NYC area who is considering building a studio in her home, wanting to know about gear and cost, along with potential pitfalls. I know I know… I was supposed to be relaxing and recharging, but honestly I had to give her my story, one that I share with you here. It’s a cautionary tale that will hopefully save you some angst if you ever decide to go down that road. Here is part of my somewhat long-winded response: 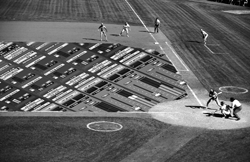 When I decided to build a studio at home, I spared no expense. I bought all the high-end gear: the biggest, baddest Mac tower available, 2 gigantic (at the time) Glyph 10-thousand RPM 400Gb hard drives, a premium Mic-Pre from Stüder, a DC300 Crown amp and Dynaudio BM-15 monitors, an 8mm RDAT to master everything, Pro Tools with dual 888 I/Os, a studio quality 4mm DAT recorder, a 10-inch reel-to-reel and the latest and greatest audio cassette recorder. Of course then there’s all the attendant software to make it all work AND the dedication of FOUR rooms in the basement to build a sound proof studio and announce booth, rack room and reception area (with its own street entrance) to greet all the hordes of clients that would surely follow. The total initial cost was somewhere north of 20-thousand dollars, making me one of the biggest saps I’ve ever known.

I don’t know if it was my “Field Of Dreams” mentality that pushed me beyond anything reasonable, or if I really believed I could make a go of running an independent recording studio out of my house, but, my oh my did I go over the top. Oh, to be sure, we did make a good go of it for a few years. I hired several different producers to ensure the studios (we put in a second studio after 8 months or so) would be in use at least 12 hours a day. My wife handled all the booking and day-to-day operations, while I would come tripping in to record VO sessions for clients, burning them to CDR and sending out via FedEx. (I know I’m dating myself, but this was before internet delivery was really feasible.)

One day, one of our bigger clients went out of business. We were scrambling to find replacement business when it finally dawned on me that this was too much like work. Plus, technology was beginning to creep and we were falling behind the tech curve further and further, almost daily. (Do you even know what an 8mm RDAT is?) I was beginning to feel like the famous snake consuming its own tail, so I stopped the train and got off.

I sold a lot of the gear with the business and the new owner promptly moved to North Carolina and changed its name. Other than the main studio, the rooms in the basement have slowly filled with junk, which is all nicely sound proofed. I still use the main studio, but mainly for internet gaming and making videos for my blog. I do 99% of my VO and production on a much smaller setup that involves my MacBook Pro, an Apogee USB microphone ($200) and a pair of BOSE noise cancelling headphones ($300), oh… and Pro Tools 11 ($295). Now, I’m not a rocket scientist, but the math seems to say I’m a bit wiser these days. The funny thing is, the quality is every bit as good, perhaps a little better PLUS, my studio can go everywhere I do.

Don’t get me wrong. I don’t want to rain on your parade, but if you’re going to build a full-on studio, you really need to sit down and draw up a full business plan. Be very clear about your goals and cut out anything that doesn’t help you get there. Know that your costs on paper will only cover about half of the real cost. It’s not the initial investment that gets out of hand… it is all the incidental things that add up. Think about phones, lights, water (you DO want indoor plumbing, right?), office supplies, advertising and town fees that always seem to pop up. (Did you get a building permit for the renovations?) Then balance all of that stuff against potential profits. If you’re still in the game, remember that it takes a good year to start seeing any kind of return on your investment.

By scaling my dreams back to something akin to my real needs, within the first couple of weeks, all of my new investment was paid for and I was easily in the black. I can provide super fast service to my VO clients, no matter where I am in the world (thanks to Al Gore’s invention, the Information Superhighway). The very few outside production jobs I take on sound just as good, if not better when I work from my kitchen table as when I had the complete setup downstairs. The best part is, I got my sanity back.

Since your first DAW used Audition rather than Pro Tools, you might be a little worried, but fear not. The reason producers most often cite for not migrating is the learning curve. I’m not gonna lie to you and say it’s simple. However, it’s a LOT simpler than it looks. If you have any understanding of how a fully equipped analog studio works, it’s a piece of cake. Analog recording studios are where I cut my production teeth, and once I started using Pro Tools, I learned more than enough to really roll into it within a few days. With your music studio background, you’ll be making award-winning noise in a couple of days, at most.

There are a lot of radio producers who would love to migrate to Pro Tools from Audition or Vegas, but have been blocked by management citing cost. Others have resisted moving to Pro Tools because they want to be able to bounce finished product “offline” at CPU speed, rather than real time. With the advent of Pro Tools 11, neither of those arguments holds up now. The cost is now actually lower for Pro Tools, and Avid finally rewrote the engine (DAE is gone) that drives the software, so offline bouncing is a reality.

One last piece of advice before I close: if you decide to make a real studio rather than a virtual studio like mine, choose your monitors very carefully. They’re expensive and you’re going to be spending a LOT of time with them. Get down to Dale Audio in Manhattan and spend some real quality time in their A/B setup room. Take a couple of CDs that you are intimately familiar with to test the systems. (I like to use Madonna’s I’m Breathless soundtrack to Dick Tracy. In particular, I like to use Vogue. Shep Pettibone’s production really makes it an outstanding test cut.) Listen to everything, regardless of what you’ve heard from other producers about how great this or that monitor is for their studio. When I built my Field Of Dreams studio, I discovered monitors I’d never heard of and, to this day, they’re the only ones I use. But, don’t you dare get the same kind because it’s what I use. They work for me. They might not work for you. (I know a ton of Genelec users who swear by them, but they have way too much faux presence to my ears, that doesn’t come back on the air… unless I’m monitoring on Genelecs again.)

Then I wrapped up with a “good luck” and signed off. If you’re sitting there wondering how you’ll ever get to Dale Audio in Manhattan, that piece of advice was basically for her. Choose a pro shop that sells hi-end gear in your own area. I do recommend Madonna’s Vogue for a test track though. The finger pops over the bass line at the beginning make one of the best transient tests I’ve ever come across. And Shep’s mix is truly masterful. The bass line is a thing of beauty.

For my sound on this month’s CD, I’ve chosen a really simple piece that ran a couple of weeks ago on Z100. I’m sure you’re sick-to-death of Blurred Lines by now, but cutting in and out of vocals, dropping VO in the holes and letting the music carry most of the weight really works for me. I hope it inspires you!

February 01, 1989 7529
The MULTIVERB from Applied Research & Technology is characteristic of the trend in digital processing. It is reminiscent of the days when the pocket calculator you saw the year before for $49 was suddenly only $9.95 with many...
Read More...
© 1988 - 2023 Radio And Production, LLC
Go to Top