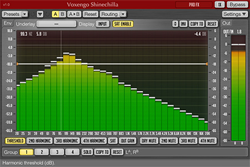 ► SM Pro Audio announced a new addition to their range of professional 500 Series products, the Pre-Z Variable Impedance Microphone Preamplifier. Featuring mic and instrument inputs and a full complement of essential controls, the Pre-Z allows users to greatly expand any given microphone’s tone palette simply by adjusting the preamp’s input impedance setting. “In addition to being a pristine, professional quality mic preamp, the Pre-Z allows you to use impedance to alter the sonic performance of virtually any microphone,” noted the Pre-Z’s designer and SM Pro Audio principal, Danny Olesh. “The results can be nuanced or fairly dramatic, with higher settings providing greater clarity and brightness, and lower settings bringing out subtle resonant frequencies in the microphone’s response.” The core benefit of variable input impedance is the ability to create a variety of tonal colors without introducing additional noise or degrading the signal---which can be the case when using traditional sound-sculpting methods, such as equalization. The Pre-Z’s high-pass and low-pass filters offer additional control and signal-shaping options, and its LME49720 op-amps ensure low noise, wide dynamic range, and up to 68dB of gain. The Pre-Z has a projected street price of $299.99. www.smproaudio.com.