Since we’re kicking off the New Year and we haven’t done it in a while, I thought I’d dedicate this month to some of the emails I’ve gotten this past year about the column. I know there have been… ahh… a whole bunch… er… well, many, anyway… hmmm… at the very least, several… huh. 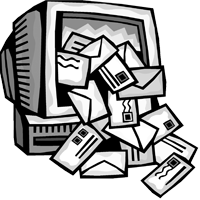 Well, this is embarrassing. I can’t seem to find one. Ha, you know, I know what happened… I changed computers, like, twice this past year. I bet they all got lost in the migration… yes, I’m sure that was it. Because there were SO MANY… that has to be the explanation…

Luckily for us, there have been some memorable ones, so I think I can make up, er, remember a couple. Let’s see…

You know it’s supposed to be “really creative,” right?

You would be right, but you weren’t there. The title for the column came from a Sales Rep I worked with years ago, who ended every conversation regarding Creative for one of her clients, “And make it REAL Creative!” As time went on, it became obvious that she didn’t know what Creative was, much less what something “REAL CREATIVE” was, so it became a running gag (even if she wasn’t in on the joke). When the chance came to write for RAP, it seemed the perfect title. As it was still in the era of recording tape, I had some friends point out that it could be “REEL Creative,” but somehow this column has outlived reel-to-reels, so it remained a sound choice (pun intended). P.S. Of all of my countless grammatical errors over the years, THIS is the one that bugs you?

What’s the best audio software to make me have that big market sound? I want to pull down six-figures in voice-over in the next few months, so let me know soon.

Sorry, despite what you might imagine, there is no magic software, microphone, preamp, or pair of shoes that’s going to make you an instant “big market voice talent.” Yes, there are certain tools that most professionals use in one way or another, but unless you’ve got the talent and experience, you’re simply going to loudly and clearly sound like an amateur. I’m sure you have a fine speaking voice (as I’m also sure “everybody” tells you), but it takes a lot of practice to learn how to interpret a script… in fact, it takes a lot of listening to the Pros before you even start practicing! Even when you have a sound worth offering to the marketplace, you’ll find that there are thousands of talented voice actors already fighting for the few available jobs out there. I’m not saying you won’t make it, I’m saying that it takes a lot of hard work, and then even more hard work promoting yourself to make the big bucks… even the few big money makers I know tell me that they are always promoting themselves, as the “hot voice” today might be forgotten tomorrow. Forget the Pro Tools set up for now… turn on the radio or TV and start listening for what makes the Pros, well, PROS!

What gives you the right to tell us all what we should do? I’ve worked with some of the biggest names in New York, L.A., Chicago, Austin, Buffalo, and Charlotte, and when I worked with them, they said I should try to get work in those markets too! You might have a good idea once in a while, but most of what you write is CRAP!

As my wife pointed out recently, my first words in my first column were, “I am NOT an expert on Creativity!” I penned that sentence 18 years ago (using a real pen, if memory serves), and after all this time, I stand by it. From the beginning until now, all I’ve done is share my experiences as I’ve stumbled through the life of an Audio Creative. I’d like to believe that I have had useful information to share from time to time… much of it either taught by those wiser than I, or by the school of hard knocks. I would never presume that there is “one right way” to approach the Creative process, much less that I knew which way to point. It’s all been about the journey and sharing the discoveries along the way, and I apologize for any and all missteps along the way. By the way, enjoy Charlotte. I’m not a Panthers fan, but there are some good BBQ joints down there.

This is our final notice. Your account is 180 days past due, and has been referred to a collection agency.

WAIT A MINUTE! How did a real email get in this column?

July 01, 1989 12586
Where would us lowly production types be without the apparent war going on between manufacturers of digital processors. In an effort to make the best product they can for the budget minded, starving musicians of the land, these...
Read More...
© 1988 - 2023 Radio And Production, LLC
Go to Top