WHAT ABOUT THE REST?

Looking at the rest of the One Knob series, here’s how they stack up, from good to not-so-good. 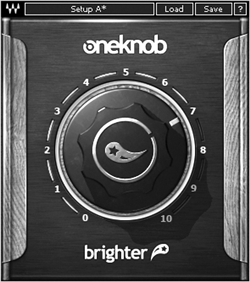 Brighter is quite obviously a treble booster, one which tends to change its response as the knob is advanced. At low settings, the boost starts around 3 kHz, but as the dial goes up its focus moves higher up in frequency. This is one of the better processors from a practical standpoint, inasmuch as it does not continue to boost the sometimes painful high-midrange, but starts to boost the presence and sparkly stuff as it’s turned up.

The Pressure compressor offers a second control, a Pad that adjusts the input signal to hit the compressor harder or softer, while the big knob appears to adjust threshold, ratio and wet/dry mix all at once. The compression itself seems to model a “classic” hardware unit, especially when the knob is cranked full. At that point it squashes the life out of the input signal, but without imparting any audible “character” to the compressed signal. I like this one for hammering either male or female voice tracks when that “used-car-advert” is what’s required. But at moderate settings it’s also capable of simply bringing the VO track closer to your grill, which is often what you want. A nice-sounding compressor overall.

Phatter seems to be little more than a low‑frequency EQ boost, and doesn’t add any missing low end the way that Waves’ Maxx Bass and other low‑frequency enhancers do. It will give you more of the low end you already have, so don’t expect it to provide Big Bottom if there’s none of that to begin with.

Wetter is a reverb whose response as you turn the dial up is to change the wet/dry balance along with the reverb sound itself. Basically it goes from short and bright to long and dark, which makes it more versatile than its one big knob implies. It’s a good algorithmic reverb sound, along the lines of a TC Electronics hardware unit. It’s not a Lexicon by any stretch, but fine for many situations.

The Filter actually removes more high frequencies as you advance the knob. A secondary control switches between several preset resonance settings. It’s a pleasant‑sounding, smooth filter, although the resonance settings live in the “well-behaved” neighborhood, never venturing forth to the “out of control” part of town. Meh.

The plug known as Driver is unfortunately aimed at guitar tones, as it simultaneously applies a nice warm‑sounding overdrive along with some mid-range boost that can be downright unpleasant for some sound sources. Bass and treble are reduced as well, so unless you want a VO track that sounds like it’s recorded through a Marshall stack you may want to pass on this one.

The One Knob plug-ins are $80 USD each, except for the NS-1 which retails $200 USD, although a limited-time offer has it available for $99 USD. The complete set of One Knob plugs retails for $400 USD, and includes all seven plugs making them about $57 each. Not a bad deal for a Waves plug-in, although the NS-1 is clearly the standout out of the series -- pity it’s not included in the bundle at a discount. Both online and brick-and-mortar retailers will provide some discounts, so it pays to shop around. But if you need a noise-reduction plug-in, the Waves NS-1 provides a simple solution that will give good results at a reasonable price.

This evaluation gave me the opportunity to test drive the results of a migration away from Waves’ traditional reliance on iLok USB dongles. Version 9 debuts the company’s new Waves License Center, which can be found in a new Applications folder inside the traditional Waves folder. Clicking on the “wlc” application brings up the main window which is divided into three panes. On the left are all the available devices on which licenses can be stored -- in this case my laptop plus one USB memory stick -- while the two panels on the right allow licenses to be moved from one device to the other, or to be backed up to Waves’ cloud storage.

When I downloaded the NS-1 plug and its associated files directly to my laptop, Waves deposited my license for that plug directly on my “cloud” account, where it is essentially a deactivated asset. Moving a license from the cloud to a storage device is quick and simple; choose the source (in my case it was the cloud), and the destination, and click the Send Licenses button. My license showed up on the Fat-32 formatted USB memory stick in less than 15 seconds. Further, it showed up as a very small file, which tells me that I’ll be able to store pretty much every Waves’ authorization I have on that small 2 GB stick.
There’s a couple of other benefits of this scheme. First, one can easily transfer licenses from one computer to another, or from a stick back to a computer. The particular memory still illustrated here is old and I don’t trust it entirely, so I’ll replace it with a new one before something untoward happens, and I’ll be able to do it in minutes. Further, I won’t have to spend another forty dollars for a newer iLok, and can spend ten dollars on a shiny new USB stick. Moreover, if that memory stick disappears, there’s a License Recovery screen that offers a simple way to recover Waves licenses from lost, stolen, or damaged USB flash drives or computers. Note that each license can be recovered only once per year. If the storage device for which a license has been recovered should reappear, logging into the License Center with the device connected will reset the license recovery period automatically. So at least as far as Waves is concerned, the iLok is dead; long live the iLok!

September 01, 1993 12848
by Jerry Vigil Is DAT here to stay? Well, if the past five years are any indication, the answer is yes. It may not be the format for the consumer, the cassette's replacement, but stations and studios continue to invest in DAT...
Read More...
© 1988 - 2023 Radio And Production, LLC
Go to Top