While summer is nearly done, the very hot season is in full swing here on the southern part of the Left Coast. This is the time when your humble scribe likes to survey the landscape in search of new goodies to give a little boost to the weekly production process. In other words, it’s time to take advantage of what little extra cash came as a result of spending the warm weeks working in a dark studio on side jobs, instead of hitting the beach, mountains, or just out of doors like normal people do. I don’t know about you, but that’s when these projects seem to appear for me -- when everyone else is having a vacation, whatever that is.

This month we’ll take a look at the Waves’ series of One Knob plug-ins, most of which have been around for a year or so. The exception is their newest entry, one dedicated to removing noise. This would be the NS-1 Noise Suppessor, which we’ll examine in some detail. Plug-ins don’t get much simpler than the NS-1. Its interface consists of a single meter, calibrated in decibels, and a single fader with a scale that goes from 0 to 100. Is it as good as iZotope’s RX noise reduction plug? We’ll have a look as well as a brief run through the other One Knob processors. 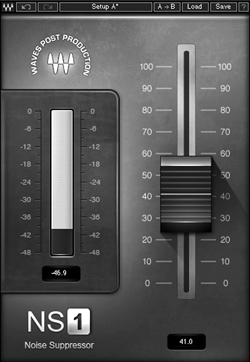 As you may recall, I’m a long-time fan of this company, which has always been on the cutting edge of DSP with their broad range of plug-ins. I’ve also been mad enough to try to replace their products, which historically have also been among the most expensive available. At one time their annual update program, which gave the user access to upgrades for a year, carried a price remarkably close to the original purchase price of the plug-ins. In other words, every now and then you had to buy the plug-ins all over for the privilege of using them. All that changed a few years ago, when they capped the annual program price at a maximum of $200 per year, an entirely acceptable amount if one owned several of the plugs (or a collection, as I do).

The current version of Waves products is now at version 9; I had just barely installed version 7 when I bought the new NS-1, which has been released in version 9 format only. I’ll update my other Waves plugs to version 9 Real Soon Now, although versions 7 and 8 can peacefully co-exist with 9. The primary benefit of this latest version is that Waves’ plugs now support full 64-bit operation, along with faster performance overall or so the company says. I cannot attest to the latter claim, although the NS-1 may not have presented a comprehensive enough test sample.

More recently, Waves has introduced several single-purpose plug-ins including a new one dedicated to removing noise. This would be the NS-1 Noise Suppessor. Plug-ins don’t get much simpler. The NS-1’s interface consists of a single meter, calibrated in decibels, and a single fader with a scale that goes from 0 to 100. That’s it. There’s no buttons for sampling room tone, no frequency knobs, no “window size” controls for the DSP. Just one fader, and a meter to tell you how much the overall level is being reduced as a result of the noise reduction.

There’s no explanation of what is going on here in the manual, which is a terse twelve pages of PDF and that mostly covers the plug-in’s header section, which is common to all Waves plugs, and how to store and recall presets (there aren’t any save a Full Reset). But the manual opines that the NS-1 is an “intelligent” process that somehow differentiates between dialog and not-dialog. Here’s what I believe is going on.

The NS-1 apparently contains a noise gate, which at low settings, from roughly 10 to 30, is quite gentle at attenuating room noise, reverb correlated with the dialog, and other stuff, and the decay time of the gate is such that it’s not audible. The gate begins to show itself at settings above 60, and while you can hear it, it is not too objectionable. At settings above 80, the gate is working pretty hard and the overall signal becomes choppy as a result.

There is also some high-pass filtering going on, which is not evident until the fader exceeds 50 but occurs nevertheless at lower levels to eliminate hum (which it does rather well -- perhaps it’s tuned to 60 Hz and the harmonics?). Above the 50 setting the high-pass filter becomes audible as the low end starts to disappear on a male vocal, probably around 120 to 150Hz. As the fader advances above 70, the filtering becomes obvious, and the low end drops precipitously at around 200 to 250Hz. At the same time, the high end starts to disappear, although it seems to be adaptive since sibilance is not reduced as much as other high frequency sounds.

All of the above is clearly level and spectrum dependent, and the NS-1 does its best to leave the dialog alone while reducing other non-dialog sounds. It’s quite effective at low settings, where it does minimal damage while reducing noise. Since the gate and filtering are audible at higher settings, it would probably serve to print multiple passes of the processor rather than try to remove all the noise in one pass. The NS-1 is a real-time processor, at least in the Audio Unit and VST versions I worked with, and it’s likely it won’t work offline in Pro Tools either, so one must print the cleaned track to a new track in order to process it more than once.

The NS-1 does a good job even with really noisy tracks, although the gating and filtering artifacts will be audible in the final product. But if the source is nearly unusable, then it may be impossible to avoid artifacts no matter what plug is used. How does the NS-1 stack up with iZotope’s RX? Since the NS-1 does not allow for getting a recording of the noise and filtering from that, the RX will do a better job with constant sounds like hum or AC noise, with fewer audible artifacts. Having said that, the NS-1 still does a very credible job even with those, and frankly did a better job with variable noises like room reverb and tones. Considering the fact that the NS-1 is dead-simple to use, and far less complicated than RX, I suspect it will get more use in my toolbox for recordings that have small amounts of annoying noise. On those occasions where there’s a significant noise problem, I likely will pull out RX, but that doesn’t often occur these days. Besides, the NS-1 is cheaper, and particularly at the time-limited offer price of $99. For me it’s a no-brainer.