I have a few items this month, some stray thoughts that aren’t quite worth a complete article, but are still worth talking about. I thought it would be good to clear my cobwebs away by combining all these odds and ends into one column. If it all sounds like the ramblings of a mind gone-round-the-bend, now you’ll know why. 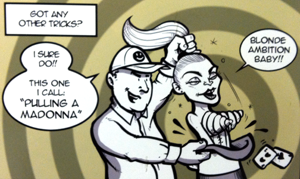 I just had a notable exchange with a GMG Rock producer in the UK named James Espley. He sent me his demo and asked for a critique, which I gladly gave and he responded with a request to quote me in his CV. After I said yes, he said, “A lot of people who aren’t anywhere near as talented as you seem to be a lot less friendly.” After feeling a bit flattered, I thought, “What a sad indictment on our business.” But I already know the truth of that. I’ve seen and experienced it first-hand any number of times. Understand, I’m not talking about the level of talent or expertise; I’m talking about the friendliness. Why are so many who should know better like that?

About a year ago, I came across a man who had been my boss, very early in my career. I always considered him to be my first big-time player in that department. When we originally parted ways, I suspect he was a bit miffed that I got the job that moved me up in market size instead of him. When I got in touch, he was very cool. I tried to warm him up a bit with some high praise for all he had taught me, but in the end the entire episode felt a bit twisted. He seemed to be happy doing what he’s doing now, but by the time we said our goodbyes, I really sensed a touch of bitterness. Of course our, “We’ll stay in touch” promises ended up meaning nothing at all and I’ve yet to hear back from him, even after a couple of emails from me. I feel a lot of sadness because I still feel that I owe him so much more than he’ll ever know.

I remember too how utterly frustrating it was, early in my career, when I tried to get advice, tips or pointers from people who were higher in the food chain than me. I suppose I was considered by some to be a bit of a pest when I’d inquire about processing, but there really wasn’t any kind of reference guide I could turn to when I was stumped for an answer. Very few people responded in any meaningful way, and it wasn’t until more articles started showing up online that I was able to get any kind of answer to my questions about EQ and compression. This is one of the main reasons I write this column and generally make myself available to questions and critiques.

Part 1 of my sound on this month’s CD is a portion of James’ demo that I thought was particularly fun. If he calls you and asks for advice… be nice, okay?

Another Brick In The Wall…

One question I’ve gotten a lot over the years is which production service or music library I use. I’m always a little shy about passing that information along, not because I want to keep it a secret or because I’m embarrassed to say I use one, but because I really think you need to tailor the services and libraries you use to your particular style. As dumb as this sounds, a LOT of people will slavishly order the same services I use and then expect the same results. A brick is a brick folks. When you’re building a wall, you need mortar and bricks. It really doesn’t matter to the finished product whether your bricks came from one kiln or another. If the quality is high and you do the job right, you’ll end up with a solid wall that can stand the test of time.

While it is true that some libraries are better than others for me, it really doesn’t mean they’re better for you. When you’re shopping for a service, listen carefully to the demos. Listen for the individual workparts. Don’t let the skill level of the demo producer get in the way of your evaluations. If at ALL possible, you need to hear a bunch of the raw tracks to see how well they’ll fit into your designs. Trust me, if the service wants you to sign on, they’ll send someone to sit and play a CD or two of raw tracks for you.

And one last bit of service and/or library advice: Don’t limit yourself in any way. There are a lot of services in the world that get ignored by American producers. There are some really excellent companies in the UK and The Netherlands for example, who would jump at the chance to be on your station. Google Production Music Library and you’ll see 8,500,000 results, a LOT of which is royalty free. And you thought there was only a handful.

Well, it is that time again. Those who might be inclined to occasionally jump on their iHeartRADIO app and click on Z100 to see what I’ve been up to might’ve noticed a lot of new sound on the air. Like Madonna, we try to give ourselves a new image every year or so. For her it was a disco dolly one year and a pointy bra the next. For us, it’s a lot subtler than that to the average Z100 listener. In our latest incarnation, we’re adding a touch of emphasis to the word “hit,” and our market name, New York. I’ll let you ponder the why and wherefore of it all as you listen to part 2 of my sound on this month’s CD.

And In The Bonus Round – A Bit Of Trivia

Are you familiar with the name Carl W. Stalling? For those about to turn to Wikipedia, he is probably the world’s most famous unknown composer. According to IMDb, He wrote classics like Duck Amuck and 758 other titles. He also gave every kid in the world for several generations, an appreciation for classical music. I once attended a performance of the National Symphony Orchestra at the Kennedy Center and heard The Hebrides Overture (Fingal’s Cave) by Felix Mendelssohn and kept thinking, “Where have I heard this music before?” The next morning, I happened to turn on the TV and flip around until I came across one of my all-time favorite cartoon characters, the little Looney Tunes hopping Mynah bird. There was that music!

I did a bit of research and discovered that almost ALL of the music in the Looney Tunes cartoons was lifted from the great classical composers like Rachmaninoff, Beethoven and even Wagner. (Head for YouTube and look up Ride Of The Valkyries from Die Valküre and see if you don’t start thinking, “Kill Da Wabbit.”)

Here’s that bit of trivia promised: Can you name the piece of music that opened and closed the Looney Tunes cartoons? It was written in 1937 by Cliff Friend and Dave Franklin and is called Merry-Go-Round Broke Down. The Looney Tunes close usually featured Porky Pig (Mel Blanc) saying, “Th-th-th-that’s all folks!”

That ought to be worth at least one round of drinks next Friday night.

December 02, 1990 31537
This month's Test Drive veers a little off the norm and down a road radio producers are getting more familiar with. That road is called For-The-Musician Avenue and it intersects with Radio Production Boulevard on the poor side...
Read More...
© 1988 - 2022 Radio And Production, LLC
Go to Top