2011 has been an interesting year for radio production and voiceover, and I’m not just talking about the business. In one small corner of the world of radio production, changes have been afoot. Within the past few months, plug-ins that include metering functionality have new labels attached to them; new terms like “LUFS” and “CALM” have popped up in readings and conversations. Certainly in the area of sound for television, and to a lesser extent in radio, Mötorhead frontman Lemmy Kilmister’s dictum of “everything louder than everything else” appears headed for the ash heap. There is a new standard for audio monitoring of TV sound that is been mandated by the US government as well as within the European Union, and since many of the tools we use are also designed for TV and postproduction work, you may well need to know about it.

The objective of this new standard is to help cap the maximum volume of commercials so it matches the volume of program material. It’s also a move to lower volume levels overall, primarily on television, but perhaps on digital radio as well. Forewarned being forearmed, let’s take a look.

The issue of extreme loudness in media may have first cropped up in France in 2002, when Apple Computer was informed by the French government that its iPod products were capable of producing more than the 100 dB maximum allowed by French law for electronic products. The company pulled its products from French shelves until a software update that limited the output to 100 dB was made available. In 2006, a Louisiana man filed a class-action suit against Apple, charging that the iPod could generate up to 115 dB and cause hearing loss. At that point, Apple made the volume limiter available worldwide.

But the real change began in 2008, when California Representative Anna Eshoo (from Silicon Valley, no less) decided to introduce a bill to ban loud TV commercials. Her then-seemingly frivolous bill gained traction among both consumers and members of Congress, many of whom were bothered by the obnoxious ads on cable. The bill ultimately became known as the CALM Act (Commercial Advertisement Loudness Mitigation), passed both houses of Congress, and was enacted into law on December 15, 2010. As a result, the units we use to describe audio volume levels are changing, starting with television and trickling down to pure audio production.

Specifically, the new standard for measuring audio program loudness has been redefined in units known as LUs (Loudness Units), and LUFS (Loudness Units referenced to Full Scale), as opposed to dBs and dBFS. These new units are appearing on some audio compressors and limiters in addition to the old dB and dbFS units. The value of 1.0 LU is about the same as the value of 1.0 dB, when both are at 1000 Hz. So a change of 6 dB will be about the same as 6 LUs. In addition, the recommended Program Loudness level for television is -23.0 LUFS, which is very close to the previous level of -20 dBFS. It’s a little softer overall, which is a good thing.

Note that for television audio, the US uses LKFS rather than LUFS, the K evidently referring to a weighting curve known as RLB and developed by the ATSC (American Television Systems Committee). American LKFS units are now considered the equivalent of European LUFS.

Back to the legislation: the above-mentioned CALM Act “directs the FCC to establish rules that require TV stations, cable operators, satellite TV providers and other multichannel video programming distributors to follow the ATSC’s A/85 recommended practice to transmit commercial advertisements,” according to www.fcc.gov/encyclopedia/loud-commercials. That’s where the loud commercial ban comes in, right? But as you’ll see, the FCC ends up asking the ATSC to use the European EBU R 128 standards for measuring and limiting volume.

These FCC people are evidently quite serious; they also clearly love their acronyms. And EBU R 128 will likely make an appearance in your editor Real Soon Now. But why the change? It’s all about accurate metering.

BACK TO THE VU

Back in the day, we measured amplitude on analog meters in volume units; hence the ubiquitous VU meter. VU meters were considered superior by many, because the mechanical ballistics of the needle tended to average out the signal level, much as our ears do, and provided a reasonably accurate RMS volume indication. However, they were not useful for monitoring loud peaks until the ‘70s, when single LEDs were introduced that lit up during a peak in the program material.

In the later ‘70s we saw the advent of the peak program meter, or PPM. Early examples were built of “ladders” of LEDs, which lit up from bottom to top as the level increased. These responded extremely quickly to loud peaks, but also “bounced” a great deal with dynamic music and provided a poor indication of the average level of the music at any given moment.

With the advent of computer-based digital workstations starting in the late 1980s, the software interface designers at first mimicked the PPM meters onscreen. Many early workstation users continued to record through analog consoles, in part because they missed the averaging capability of traditional ballistic VU meters. Software writers wrote code that made the onscreen PPM meters exhibit the apparent ballistics of an analog VU meter at lower amplitudes while catching peaks quickly at higher amplitudes.

Unfortunately these highly accurate, peak-oriented workstation meters, combined with the extended headroom provided by digital recording and plug-in compressors and limiters, allowed engineers to continue to record based on avoiding peaks, instead of based on what their ears told them during the recording session. Later, the producer or client likely came in and demanded louder (and usually got it). Hence the Loudness Wars which infected recorded music first, but not last. Producers were given the ability to make production sound louder by decreasing its dynamic range and seriously damaging the music. If you haven’t seen Matt Mayfield’s video illustrating this point, it’s still available on YouTube (www.youtube.com/watch?v=3Gmex_4hreQ). Please watch it.

It is also the case that the Loudness Wars have affected radio as well. Of course, station promos and imaging are generally designed to be loud and “in-your-face”. But what is, in my opinion, some of the most compelling imaging I’ve heard makes very effective use of dynamic range, and has not had all of the life squashed out of it by compressors and limiters. On the other hand, too many radio commercial advertisements exist seemingly just to beat the listener over the head with a message. These often use heavy compression and limiting, as if their message will be more palatable if it simply harder to ignore. It is not, of course.

THE EURO SOLUTION TO TOO LOUD 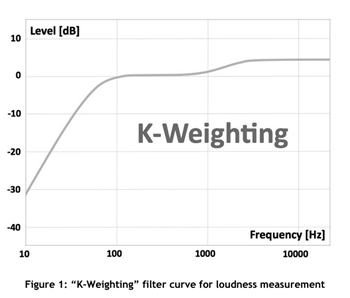 The (American) ATSC’s rules are available as a mind-numbing, seventy-five page PDF at www.atsc.org/cms/standards/a_85-2011a.pdf. Note that this document is primarily oriented towards digital television as opposed to digital radio, and you will be better served by reading the EBU documents, if you are so inclined. But no matter, because that ATSC document is based completely upon the European ITU’s (International Telecommunications Union) studies and recommendations, which have been adopted by the EBU (European Broadcast Union).

So it sounds to me as if the FCC has instructed the ATSC to use the EBU’s recommendations from the ITU. Got all that? Me neither. That aside, most of these documents are freely available as PDFs on www.ebu.ch/en/technical/trev/trev_home.html.

In looking through the documents, I suspect the EBU was anticipating some resistance on the part of broadcasters and production people to these changes, based on their creation of a smiley face logo from the numbers 1, 2, and 8 (referring to the full EBU R 128 standard. It’s kind of creepy.).

Allow me to summarize the documents a bit (geek alert!): the EBU recommendations state that Program Loudness (averaged overall), Loudness Range (like dynamic range, but weighted), and maximum True Peak level are the metrics that will be used to define the amplitude of program audio. Further, for television use the audio’s Program Loudness level should be normalized to a target of -23.0 LUFS, with a deviation of not more than plus or minus 1.0 LU. This target level is to be measured over the entire duration of the program material, without regard to individual elements including voiceover, music, or sound effects. Further, the maximum permitted True Peak level of the program during the entire production shall be no more than minus 1 dB TP (or True Peak).

WHAT’S IN IT FOR RADIO AND VOICEOVER PRODUCTION?

That’s a difficult question to answer. But it is true that many of our workstations and the plug-ins that we use in them are also developed for postproduction in movies and television. The chances of a significant trickle-down effect to pure audio production, including radio, are quite good.

The assertion that EBU R 128 will end the Loudness Wars would be great, although that remains to be seen. But the new measurement standards do include measuring processes that may that end inevitable. For example, it introduces a new weighting system called K–weighting, which promises a better match between the listener’s subjective impression of volume and an objective measurement that do A- or C-weighting. Program material of any kind is measured and rated for loudness from beginning to end, and periods of soft material or silence are actually gated out, so they do not affect the overall loudness rating of the complete program.

For example, a spoken word performance with long pauses would have a lower measured average volume across the entire presentation, due to the effect of the silent portions. If normalization were applied to the entire program based on that average, the result might be louder than necessary. By gating out the silent portions, the audible portions could be more accurately measured, and if normalization was required across the entire program, based on the average volume, that normalization value would be smaller because of the higher volume of the un-gated As portions.

At the present time, there are few metering plug-ins that include an EBU R 128 scale mode, but it’s reasonable to expect that more will follow presently. The three products I was able to locate while researching this article are the PPMulator+ from zplane products (http://products.zplane.de/index.php?page=ppmulator), the TB EBULoudness from ToneBoosters (www.toneboosters.com/tp-ebuloudness/), and the NUGEN Audio VisLM Meter (www.nugenaudio.com/visLM_loudness-meter_VST_AU_RTAS.php). I did not have an opportunity to test their accuracy against known audio meters, but the scales used in each appear to be true to ITU R 128 specifications. However, some are not cheap: the NUGEN Audio plug is $449 US for the version with logging, and $299 US for the compact version (which is more suitable for production use). The TB EBULoudness meter is a more reasonable 10 Euros, while the falls in the middle at $70 US. 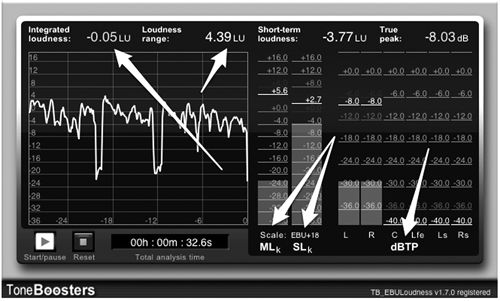 It’s also important to note that all of these changes are specifically designed for digital media, as opposed to analog. And the ultimate goal is to equalize the volumes between the actual program material and the commercial spots. With current AM and FM radio programming, there’s not a great deal of difference in the volume of the stop set versus the volume of the music or news broadcast. But to the extent that more stations broadcast their signal digitally today then do not, there’s a chance that the FCC may eventually pay attention the amplitude of the spots on radio, too. I’m just sayin’...

May 01, 2002 16392
by Steve Cunningham Most of my clients get CD copies of their finished projects, including those that want the finished tracks sent as mp3 files via the Internet — it’s cheap insurance and a nice touch. As a result, I duplicate...
Read More...
© 1988 - 2022 Radio And Production, LLC
Go to Top