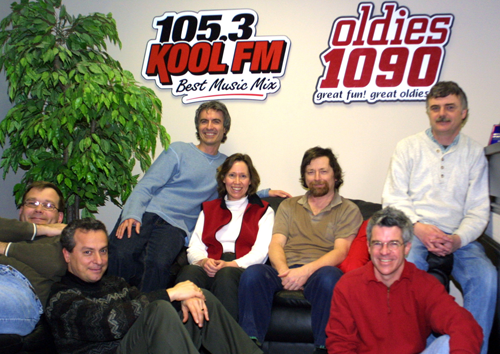 It’s nothing new to you. You know how important the creative is to the success of the client’s campaign. We talk about it all the time in these pages. What is new is when not only you understand this simple truth, but so does your sales staff… AND your General Manager. And even more amazing are clients that understand, clients that understand how much more important their message is than getting that spot on the air tomorrow. This is how things work at Oldies 1090 and 105.3 KOOL FM in Kitchener, Ontario. And guess what? It all revolves around a common-sense approach of doing “what’s right” for the client. Imagine that… servicing the customer.

With the vision and leadership of General Manager Paul Cugliari and the expertise of Creative Services Manager Steve Thompson, these two stations are proving that you CAN teach clients that the phone number doesn’t need to be in the spot 12 times. You CAN teach salespeople that if the spot has to start tomorrow, the creative is going to stink, the ad won’t work as well for the client, he won’t be back, and everybody loses. Paul, Steve and their entire creative team are using the power of radio to its fullest for their clients and are rewarding themselves with long-term happy customers. They tell us how it works and why in this month’s RAP Interview. Listen for a demo of commercial work from Steve and his team on next month’s RAP CD. (RAP Awards Finalists on this month’s CD.)

JV: You never went through sales?
Paul: No. Although I can say I’m one of those rare PDs that understand that my role is to create the party and invite our listeners so we can then introduce them to our clients who pay our bills.

I think there are many people in sales that spend six months learning sales and then spend the next twenty years repeating that six months over and over again. In the last three years, I’d like to think that I learned a lot about sales. And I keep learning. I haven’t learned all I need to know, but I think our sales staff understands that I’m really about making money and so are they. The big question is, how do we do it.

JV: Tell us a little about the Kitchener radio market.
Paul: The population of the central market area is bordering on 400,000. We’re an hour outside of Toronto, so we compete for listeners with all the Toronto stations. I’d say 50% of our market tuning is out of market.

JV: Who owns your stations, and how many stations in your cluster?
Paul: We’re owned by Chum Limited, and it’s just the two stations here in Kitchener.

JV: Steve, how about a little background on you?
Steve: I started back in ’81, the same as Paul. I started at CFTK in Terrace, British Columbia. Then it was to CKNX in Wingham, Ontario. Next stop was CHYM in Kitchener where Paul and I first worked together. There was CFNY in Toronto from ’89 to ‘93, CHML/Y95 in Hamilton from ’93 to ‘95, and then here in September of 1995, and I’ve been here since. Through just about all of that, my titles have been Creative Director and/or Creative Writer and Senior Writer, and now I’m Manager, Creative Services.

JV: How many people on your creative team?
Steve: We have four writers and two and half producers. And when you say creative team, it’s interesting—in the last few years we really have viewed the entire station as our creative team. Sales is part of our creative team, even our news department and our administrative staff, because they’re all really involved in that creative process. It’s rather unique the way it’s done here.

JV: Give us an example of how your team would put together a commercial. What’s the process?
Steve: I would say it’s almost backwards. We had a client last week where we were talking all about creative, and then the buy came at the very end. Once we have addressed how we’re going to speak to our client’s customers, then we talk about the buy. And the clients get it. I mean they started saying, “Gee, you’re doing it backwards,” and then by the end of the conversation they were saying that everybody else is doing it backwards. So often, you make the buy and then rush to get the creative on the air and hope it’s right. We’ve taken the opposite approach to it.

JV: So that approach is rare in Canada? It certainly is in the U.S.
Paul: Certainly. I think that we’re doing some real pioneering here. But as simple as this sounds, coming from a programming side, clients view advertising as a mystery. They don’t know what they’re buying, but they don’t have the courage to say that. And we stepped forward and said, “You know, if you’re message isn’t right, no matter how great a schedule or whatever, you may get some results, but you’re not going to get ultimate results. It does really come down to your message, and so let’s spend our time crafting the kind of message that is going to work to help your business grow in the long term, and then we’ll figure out the schedule after that.”

March 01, 1999 2622
Jim Conlan & Bill West, Radio Works, Houston, Texas by Jerry Vigil It’s no secret that radio is rapidly going through some major changes, and we’re not through yet. Our heads are still spinning from consolidation, and there are...
Read More...
© 1988 - 2022 Radio And Production, LLC
Go to Top