The Monday Morning Memo: The Secret of Self Definition

Corporate mission statements all sound alike because companies stand for pretty much the same things: “We believe in honesty, quality products, a positive work environment and a fair profit.” 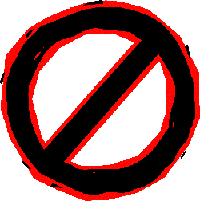 You and I write mission statements because we want people to like us. Our pattern-recognizing, touchy-feely right brains see a newcomer and ask, “How are we alike? What makes us the same?”

But the deductive-reasoning left brain looks for discrepancies and anomalies, “How are we not alike? What makes us different?” Consequently, we cannot set ourselves apart according to what we stand for since we stand for pretty much the same things.

We set ourselves apart by what we stand against.

I’m not suggesting you become a complainer, a picketer or a self-righteous prig. I’m suggesting only that you make clear to the world what you don’t do.

What you exclude - not what you include - is what defines you.

1. There’s a nationwide fast-food chain that refuses to be open on Sundays. Can you name it?

2. BeautifulPeople.com – a dating site for narcissists - excludes anyone who is overweight. (Gasp!) This January they kicked out 5,000 members whose post-Christmas photos revealed they had gained a few pounds during the holidays.

3. A fitness center became the fastest growing franchise in history by excluding half the population. They opened their second location just 15 years ago. Curves – for women only - now has more than 10,000 locations in 70 countries.

5. The Heart Attack Grill excludes from their menu anything that might be good for you. But they’re happy to bring you a Quadruple Bypass Burger with Flatliner Fries and unfiltered cigarettes. “Taste Worth Dying For.”

6. Martin – that most highly revered of guitars - won’t make electric instruments. Acoustic only.

7. Geppetto’s Workshop is a toy store that excludes anything made of plastic or requiring batteries.

I’m not asking whether or not you agree with these companies. I’m not even suggesting that we debate whether their exclusions are ultimately good or bad for business. (I’m fairly certain that Chick Fil-A would make more money if they opened on Sundays.) My point is merely to illustrate that an organization’s exclusions define it far more clearly than its inclusions.

Does your company exclude anything?

Take a moment to answer these questions and you will have stepped onto the path that leads to Corporate Differentiation.