No, this is not about world peace. It’s about DSP, because Dave Gamble has been writing DSP code for years, for companies including Focusrite, Sonalksis, and my current favorite specialty plug company, Brainworx. While helping these companies develop sophisticated DSP-based audio products, Dave decided to strike out on his own. In early 2009, Dave founded DMG Audio to develop and market his own software processors. His latest efforts include a compressor and a couple of equalizers, all of which sport features that illustrate Dave’s penchant for thinking well outside the box. 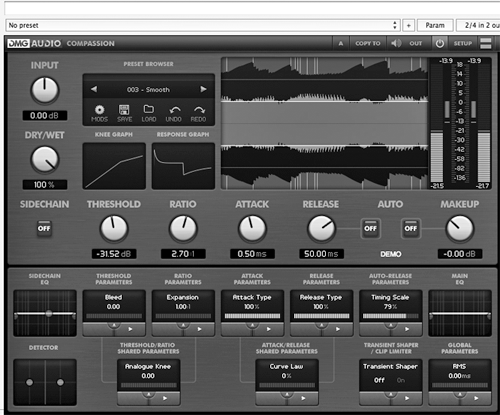 Let’s first tackle DMG Audio’s more complicated plugin, the compressor cleverly named Compassion, and I’ll try to explain what I believe Dave Gamble was trying to achieve in designing it. Dave has taken the concept of modeling a specific compressor in software, and has exposed all the inner wiring of the model for you and me to play with. So instead of providing a series of presets, each of which mimics a specific compressor brand and model, Dave has provided control of the parameters that are used to generate that specific compressor model, but are usually hidden behind the preset. If that makes sense to you, then you will understand the extensive front panel controls, which are split into three sections.

What is commonly labeled the title bar of the Compassion plug is known as the Clutter Bar, and is the first of the three sections. It consists of toggles to engage, disengage, and route the sidechain input in various configurations, buttons to copy and compare changed presets with the originals on which those changes are based, a setup menu to configure and calibrate the various meters, and an advanced button that reveals the third section.

The “second” section is really the main display, and shows the customary compression controls. You will get along with these quite well at first, before you dive into the deeper elements of Compassion. These standard compressor controls are supplemented with graphical elements which, on the left-hand side, describe the Knee Response curve and the Compressor Response curve, which can be wildly complex. On the right-hand side is an innovative audio graph that displays the input waveform scrolling right to left, while above and below it the amount of gain reduction is illustrated by the thickness of a band that is alternately green or red, depending on whether the compressor is in its attack or release phase. The threshold level is shown by a white line, and you can choose to view the input or side‑chain waveform superimposed on the output waveform. This is joined by a more conventional vertical bar‑graph VU meter. The many extra controls for detailed configuration are accessed in an optional panel below the main window (the third section), where they are organized into panes.

This is the Advanced section, and it’s a multifunction panel whose contents depend on which of the advanced functions you’ve selected. These functions include Attack and Release parameters, Main and Sidechain EQ, Threshold and Ratio tweaks, and a full Transient Shaper. The end result is that Compassion can be tweaked to behave like almost any hardware compressor, as well as doing a great deal that no hardware unit can. For example, many compressor plug‑ins let you adjust the extent to which the left and right side‑chain signals are summed (to control the degree of stereo linking) but Compassion goes much further. Moving two dots around on an X‑Y graph allows you to graphically set a separate L/R sum for each channel of the mix. Likewise, side‑chain EQ is a common feature of dynamics plug‑ins, but not the way it’s been implemented here. You can even choose to have the compressor act only on the filtered sidechain signal, leaving the rest of the audio alone, enabling Compassion to be used as a sophisticated de‑esser.

October 01, 2002 6782
by Steve Cunningham I have to admit that the student’s words gave me pause. When I mentioned in my Radio Production class that I was reviewing a product called “MySoundStudio,” several students rolled their eyes. One said, “It...
Read More...
© 1988 - 2022 Radio And Production, LLC
Go to Top