"...And Make It Real Creative!": Being Wally Wingert, Act I

I don’t think there’s a radio Creative on the planet (present company included) who hasn’t at one time or another dreamed of doing high profile National voice-over. For most, dreaming is as far as they take it. Wally Wingert wasn’t content to simply dream. I still remember the day word buzzed through the KELO studios back in the late ‘80s. “Wally is moving to LA! He’s going to give it a shot!” I’m sure there was both skepticism and envy in all of our minds… working in Sioux Falls, SD, he might as well have announced that he was walking to Jupiter. But even then, I knew that when push comes to shove, you always bet on Wally. Pity I didn’t put down some cash. 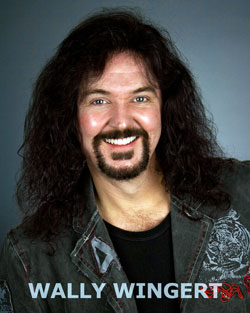 Today, he does countless voices for Family Guy, brings Ant-Man to life on the Avengers… Earth’s Mightiest Heroes, and those are just the beginning. For instance, he’s the announcer for a little talk show you might have heard of… The Jay Leno Show. Yet, for all his success, he’s still the friendly, engaging, funny guy from South Dakota. I consider it my honor to introduce Wally Wingert…

TR: Your Creative journey has taken you down many paths… let’s start with your first step. Who was your first Creative inspiration?

WW: It would have to be Adam West. He’s the first media figure who inspired me to want to dress up and be a character. When “Batman” came on TV in 1966 I was 5, and I was obsessed! After that I would be inspired by Andy Kaufman, Elvis Presley, James Bond and others. But Adam was definitely the first!

WW: Indeed he did! I was 5 and had to put together my own Batman costume out of household items. I had my dad’s military cap that I wore sideways on my head (for bat ears), I also wore a towel safety-pinned around my neck for a cape, a yellow pinback button on my chest for a bat emblem, old work gloves, my mom’s belt and my pants tucked into my boots. I recruited a neighborhood friend to be my Robin and we would go on adventures all over the neighborhood.

WW: Yes! I was working at KELO-AM (I had been there as a part-timer since the summer of 1979) when I read that Adam West was coming to town for the World of Wheels show on March 1, 1980. I made all the necessary calls to the producers and asked if I could interview him. I was granted an interview and a friendship ensued. Who knew that 20 years after that we’d be working together on “Family Guy?” Ain’t life strange?

TR: Radio wasn’t your first Creative focus, was it?

WW: Acting came first. At a young age somebody revealed to me that the kid on “The Munsters” actually got PAID to do that! I couldn’t believe it! I would have done it for free, but to dress up in cool costumes AND get paid! I knew even at that young age what I wanted to do right then and there!

TR: So when did radio come into the picture?

WW: One night I talked to Charlton Heston on a late-night radio program once when I was a kid, and told him I was interested in being in acting. He said that radio would be good experience for acting. So I pursued that. I was in a high school play called “Anything Goes,” and the family of the gal who played opposite me owned a small daytime radio station, KABR-AM 1420 in Aberdeen, South Dakota. Strangely enough, the summer before I won a Coca Cola DJ contest at the same station. During the summer, one person per week was selected to be on the air for one hour on a Friday afternoon. You had to write an essay about why you wanted to be on the air. It was something I had wanted to do all my life so it was easy for me to write. When they called and said I had won, and they needed me to come down to record the promo, I didn’t know what a promo was. But I said OK. When I did the hour, the Music Director Maestro Mike Nelson was running the controls. He said I was pretty good and he wanted me to cut a tape for possible part-time work. But when I did the play the following spring with the daughter of the station’s owner, it was a lock. I had my job! So it’s all networking I guess. Even at that age!

TR: By the time our paths crossed at KELO in the mid-‘80s, you had not only established yourself as a great radio personality, but also a master of song parodies. How did you get into that?

WW: KELO played “The Dr. Demento Show” on Sunday nights. The show fell during one of my shifts so I became a fan. Since I had always played around with music, writing and rhyming, I figured I’d give it a shot and put one together. I had access to the radio station’s studio so recording it would be easy.

WW: My first song he played was “I’m Not Answerin’ The Phone”, which was a parody of Eddy Grant’s “Romancing the Stone.” It mirrored just how poor I was back in those days and how I dreaded getting calls from collection agencies.

TR: And THAT connection got you to… ahh, but that would be telling. Join us next month for Act II of Being Wally Wingert. (If you’d like to skip ahead in the story, check out Wally’s website: wallyontheweb.com.)

January 01, 2011 5946
by Steve Cunningham Users of Nuendo 4 have waited nearly three years for the new release of Steinberg’s flagship multitrack audio editing product; this column hasn’t looked at Nuendo since version 3 back in 2005 and believe me,...
Read More...
© 1988 - 2022 Radio And Production, LLC
Go to Top