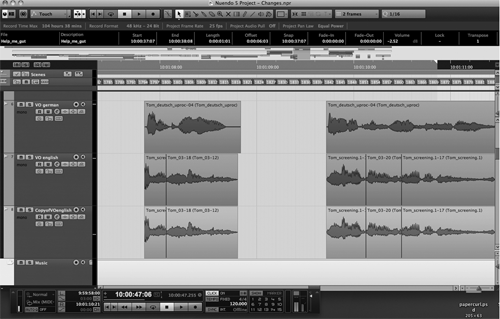 Users of Nuendo 4 have waited nearly three years for the new release of Steinberg’s flagship multitrack audio editing product; this column hasn’t looked at Nuendo since version 3 back in 2005 and believe me, there are plenty of changes and additions in version 5. Nuendo is a serious editor that has been attuned to the needs of post production since version 2, while still keeping its music production chops sharp. Unlimited tracks, trim bins that now include Clip Packages to group multiple sound objects as one, a highly capable and flexible mixer, and 50-odd effects plug-ins make Nuendo one of the most powerful DAWs on the market today.

It does carry a notably radio-unfriendly price; with US street at $1800 it is also possibly the most expensive software editor on the market today. But upgrades are reasonable for previous owners, and there is a great deal of value for radio production folks. With this year’s holidays still fresh in our minds, let’s call this review an exercise in window shopping... you may see something you like.

Nuendo continues to use a USB dongle for copy protection, and that dongle must be connected before the program will start. As has always been the case, Nuendo is compatible with both Mac and PC computers. Mac systems must have Intel Core processors running OS X 10.5.8 or 10.6 with CoreAudio-compatible hardware. PC systems must have at least a 2 GHz processor, along with Windows 7, Vista, or XP SP2 (32-bit, of course). It should be noted that when I attempted to install the demo project from the fancy new Start Center, which presents various links to installation and help facilities, it showed me a dialog that demanded I install SP3 then thoughtfully provided a link to do so. I took a pass and instead installed the demo project manually. PC hardware must be DirectX or ASIO-compatible. Both systems require a gigabyte of RAM at minimum, a display resolution of 1,280 x 800 pixels, and at least 4 GB of free hard-disk space. QuickTime 7.1 and a video card supporting OpenGL 1.2 are required for video playback. Native Nuendo 5 64-bit support under Microsoft Windows 7 increases the addressable RAM from 2 GB to 1 terabyte, which translates into more tracks, plug-ins, and sound effects samples; this arguably makes Nuendo one of the most powerful DAW platforms in existence, at least on the PC side. Mac users will have to wait for 64-bit operation, despite the fact that the program is compatible with 64-bit Snow Leopard.

Nuendo 5 records at sample rates up to 192 kHz, and in what can only be called overkill for radio work, it supports up to 256 inputs and group channels along with the aforementioned unlimited tracks. Quantization is at either 16 or 24-bit, although Nuendo utilizes 32-bit floating point processing throughout. The is perhaps the biggest reason for Nuendo’s lauded sound quality -- 32-bit float processing gives you a lot more headroom inside the box, and can noticeably improve the sound of summing multiple tracks during mixdown. Further, Nuendo’s VST Bridge enables 32-bit VST effects and instrument plug-ins to be used in the native 64-bit version (as noted, PC-only at the moment).

Nuendo 5 allows up to 999 markers in a project, which is great for recording audiobooks and other long-form projects. However, discerning which markers indicate a project change or break, versus a mistake or pickup, can be tough. Nuendo 5 allows up to 32 marker tracks, which means markers can be more easily categorized and organized within a Project. And while Markers and Cycle Markers are still essentially used to locate single points and ranges respectively, the Marker window in Nuendo 5 allows a number of different attributes to be associated with each Marker entry. Attributes can be more than just text labels. For example, you could add a Rec(ord) Done attribute, providing a convenient tick box to flag which VO lines have been recorded. You can even create your own custom attributes if the ones provided aren’t enough.

The Marker window arranges attributes into columns, where each Marker has its own row, as before, and there’s even extended space in the lower part of the window where additional attributes can be edited for the currently selected Marker. In the main area, each attribute column can be configured to sort or filter the Marker list according to the content it contains. Pro Tools has had a similar function for a few years now, but it’s somewhat different. In Pro Tools the attributes of a marker (or Memory Location in PT parlance), include the name, the location or region, and settings that govern zoom level, track visibility, and other layout items. This makes up for PT’s lack of “screen sets” and works quite well. The Marker Window in Nuendo 5 is more a freeform database of text information that you want to store, more along the lines of track notes. Trust me, once you’ve used this feature you’ll come to appreciate it.

July 01, 2009 5782
by Steve Cunningham I’ve done a great deal more location recording lately, including a number of interviews that are destined for podcasts. My go-to recorder has been the Compact-Flash-based Fostex FR-2LE (see the November 2007...
Read More...
© 1988 - 2022 Radio And Production, LLC
Go to Top