► The world’s first solar-powered instrument tuner is the new TASCAM TC-1S. The TC-1S charges its battery from a bank of solar cells on the front panel, and a USB input is also available for quick-charging when you’re completely in the dark. It’s wrapped in a shock-proof silicon cover, available in six colors, and a strap and clip keep it charging all day long on your gig bag. At a price under $40, every planet-conscious musician is going to need a TC-1S. The TC-1S has a built-in microphone as well as a 1/4” input for guitar and bass tuning. Its lightning-fast pitch detection is displayed on a wide bargraph display for instant feedback. Four display modes are available, including fine pitch display, and the tuner can be calibrated to an external source. www.tascam.com. [Editor’s note: I had Tascam send me one of these to check out. I have an old Guild acoustic and a Fender Strat lying around, which I attempt to play from time to time. Not having the gift of absolute or “perfect” pitch, I pretty much need a tuner to get these strings humming just right. The TC-1S did the job perfectly. The built-in mic worked like a charm with the acoustic, and plugging the Strat into the input jack let me finally set the intonation on this dusty friend. It never sounded so good. I had an older electronic tuner, but batteries died one more time, and for some reason, it never made it back, even with new batteries. The TC-1S should eliminate the dead battery problem forever, and it appears to get a more than adequate charge from indirect light – just keeping it around the office seems to provide enough light for the photo cells. Only two things that would have made this unit sweeter would be a little wire “kickstand” to prop the unit up for better view of the display, and secondly, a backlight on the LCD display would help in darker environments, or even an LED that would light when in tune, but that probably wouldn’t do much for the battery life. A perfect pitch pill wouldn’t be bad either. jv…] 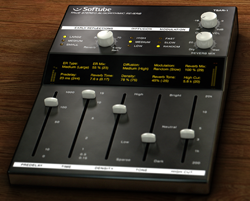 ► Swedish plug-in developer Softube introduced the TSAR-1 True Stereo Algorithmic Reverb -- the newest addition to the company’s substantial product line, and their first reverb. Based on a “best of the best” list of vintage classic reverbs, and sprinkled with a taste of modern high end units and a heaping spoonful of Softube’s own mojo, the TSAR-1 brings affordable pro-quality algorithmic environmental processing to Native platforms (Mac/PC; VST/AU/RTAS); approximate street price: $299.99. As with all Softube plug-ins, TSAR-1 was developed using advanced component modeling, wherein both the circuit components and the interaction of the components are modeled. This approach enabled Softube to capture in detail the specific electronic and sonic behaviors of all the devices that contributed to the overall TSAR sound and performance. “We chose an algorithmic design for TSAR-1 rather than a convolution-style reverb,” explained Softube product manager Niklas Odelholm, “because we wanted to create a true classic reverb with as much finesse, dynamics, sonic flexibility, and versatility as possible. Fortunately, native computer processing power is so great, that we’re able to deliver a pro-quality algorithmic design at a fraction of the cost of the hardware units that inspired it.” The proprietary algorithm Softube implemented is capable of creating an exceptional range of ambient environments, from natural spaces to tiny cubes to canyons--and everything in-between. Central to TSAR-1’s sonic precision is its True Stereo design. Many “stereo” reverbs are actually mono reverbs that combine the L/R input signals and artificially split them on output. Others models are dual mono, which maintains L/R separation, but doesn’t account for the L/R cross-talk that occurs in natural spaces. TSAR-1 addresses these issues with a proprietary reverb engine that is actually four discrete engines, each of which is dedicated to a specific part of the signal path. Engine one processes the Left signal, engine two the Right, engine three handles Left+Right, and engine four processes Right+Left. This architecture results in significantly greater detail and nuance in the reverb sound itself, and both the source signals and the reverb’s stereo imaging stays totally intact. Programming TSAR-1 is easy and intuitive, with all parameters and edit/compare instantly accessible. Those who wish to keep programming time to a bare minimum need to look no further than the included TSAR-1R plug-in. www.softube.com. 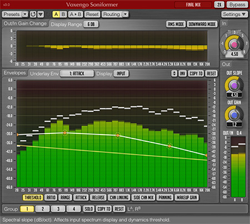 Also from Voxengo, Deft Compressor version 1.2. Deft Compressor is an audio track and bus compressor plug-in for professional audio production applications, available in AudioUnit and VST plug-in formats, for Mac OS X and Windows computers. This version added support for key signal filtering which is a very useful function that allows you to perform de-essing and use various compressor “voicings.” Feedback compression mode can be also enabled now. This mode sounds a little bit “punchier” than the default “feed-forward” mode. The “feedback” mode in many cases tends to produce a more controlled, less fluctuating sound due to its inherent “prognostic” behavior. However, the most important addition to this version is the “Punch” parameter. While in our opinion, the original S-curve timing function was a very unique and interesting feature on the compressor plug-in market, it sounded a little bit too punchy for many users. Hence, we decided to implement a special parameter that adjusts the S-curve. The “Punch” parameter allows you to dial in a desired amount of “transient emphasis” effect, expressed in percent. When set to “100” the effect is maximal and the compressor is using the S-curve timing function. At “0” the compressor will be using a much “quicker” L-curve timing function which produces a colored bright sound. The characteristic feature of this compressor is its ability to produce “slim” and “slick” sounding compression, with an intelligibility enhancement effect. Such result is achieved by the compressor’s timing function that closely resembles the S-curve on both attack and release stages. The S-curve timing function means that the attack and release stages “look” like an S-curve (sigmoid curve). Such a curve sonically adds a very warm coloration, without the sharp edge. Besides that, S-curve on longer release times possesses a bit of “hold” time delay where it does not change. This allows the compressor to have clean, almost uncolored higher frequencies. Purchase on-line for US$89.95.  www.voxengo.com. 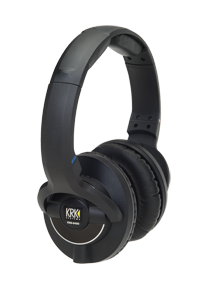 ► KRK announced a new series of professional headphones that feature an advanced transducer design, extraordinary sonic accuracy and a level of comfort that is being described as the most comfortable headphones ever experienced! Both the KNS-6400 and KNS-8400 provide honest reproduction that will benefit studio engineers, studio musicians, producers and avid music fans alike. KRK headphones provide natural frequency response that gives you a reference standard unaffected by your location. With a range of 10Hz-22kHz on the KNS-6400 and a range of 5Hz-23kHz on the KNS-8400, you will be able to monitor audio without compromising your tracks. With a detachable and replaceable locking cable, rotating ear cups for travel and storage, durable materials, replaceable ear and head cushions and a wide range of accessories, the KNS series is ready to withstand the needs of producers, musicians, performers and engineers -- in the studio and on the go. Built with comfort as a design imperative, the KNS 6400 & 8400 have a lightweight reduced-mass structure with an adjustable low-pressure headband system. The self-aligning yoke ensures the best possible fit. The acoustic foam ear pads gently conform to your unique head shape improving low-end response and providing a high level of sound isolation. Suggested US selling price: $99 for the 6400 model and $149 for the 8400. A member of the Stanton Group of companies, KRK Systems provides studio monitors and control room solutions for the professional audio market. KRK products are distributed throughout the world via a network of distributors and dealers in more than 75 countries. www.krksys.com.

► LaCie, a leading provider of professional storage solutions, together with Pro Sound Effects, provider of professional sound effects libraries and solutions, announced a strategic partnership that will deliver premium sound effects libraries and search software on industry-leading hard drives, for an enhanced media production experience. The BBC Sound Effects Library is considered one of the most popular sound effects libraries in the world. Until now, the original BBC Sound Effects Library was available only on audio CD, making it cumbersome for media producers to search, audition, select and import sound effects. The new partnership creates a complete digital experience for media production professionals. By combining database sound files with hard drive technology and search software, professionals in a number of influential markets have a comprehensive sound design solution that optimizes content integration and workflow. The partnership delivers five BBC sound libraries on two desktop and mobile storage solutions – the LaCie d2 Quadra and the LaCie Rikiki. The largest of the libraries, created by Pro Sound Effects, leverages the original 2400 sound effects, while including an additional 30,000 commercial sound effects that were previously unavailable. Now, the entire library of 32,400 sounds effects can be purchased in one complete collection on a LaCie one terabyte, d2 Quadra. The d2 Quadra was developed for full compatibility, including four interfaces - eSATA 3Gb/s, FireWire 800, FireWire 400, and USB 2.0— for universal connectivity to PC and Mac® workstations. Additionally, the d2 Quadra features a unique, fanless design, keeping it quiet and safe in any production environment. The smaller sound collections can be purchased on LaCie’s Rikiki, the most compact high-capacity hard drive on the market. The sleek black mobile hard drive is enclosed in brushed aluminum and can fit in a pocket for absolute mobility and data protection. www.prosoundeffects.com. www.lacie.com. ▲