It would appear that Santa was good to us this past season, and I for one didn’t even notice it until well after the fact. It would seem that beginning late last November, while we weren’t looking, iZotope evidently became the Official Audio Plug-In Supplier to Santa Claus. Through this exclusive relationship with the Old Guy in the Red Suit, we were presented with a hot new music-recording oriented plug-in, one which seem on the surface to have application to the radio production community.

I’m speaking of iZotope’s new Nectar vocal plug-in. Nectar provides a complete channel strip in production, for recording, effecting, and sweetening voiceover tracks. The product is geared for recording musicians, of course, but given how many are either ex- or wannabe-musicians, when haven’t we borrowed from those guys for our own nefarious purposes? Let’s take a look and see if we can misuse this device. 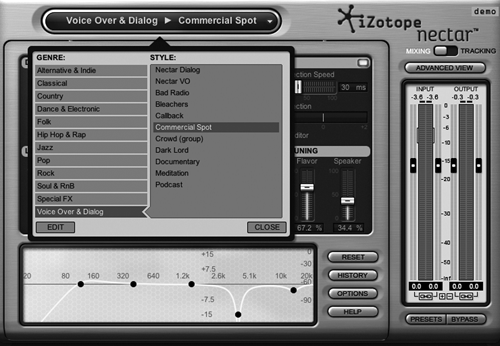 Nectar is an all-in-one vocal effects processor from iZotope. I cannot say for certain, but it’s possible that this product may have some of its roots in an email conversation I had a couple years back with the president of the iZotope. He asked me if I could imagine a single plug-in that voice actors could use for all their processing needs, and if so, what the various parts might be and how might they be arranged. It was a brief exchange, I have no idea what role it may have played, and I take no credit for anything. But I remember a conversation like that, and Nectar seems to have all those requisite parts I listed at that time plus much more.

Nectar is essentially a channel strip for vocals, and it includes eleven modules in a single plug-in: EQ, Compressors, a Gate, a Limiter, a De-Esser, Delay, Reverb, Doubling, sound-shaping modules like Saturation, and specialty modules like a Breath Control (to reduce breath noises) and Pitch control (to correct pitch anomalies). These modules occupy the bulk of the space in the user interface, and the most-used controls are available there for tweakage. There’s a whole lot of processing power here and literally dozens of controls to tweak, even in the basic, producer-oriented front panel view (and yes, the Company refer to the basic view as being “producer-oriented”).

In what I assume was an effort to further simplify this “producer-oriented” process of programming Nectar, iZotope provides a large number of presets called Styles, which in turn are grouped into categories which they refer to as Genres (more on these presets below). Depending on which modules are activated for a given Style, the front panel controls and labels may change, so don’t assume. The right side is where you’ll find a pair of large-ish stereo input and output meters, and of course the left and right channels on in and out can be linked or independent.

At the top right is a slide switch which allows you to put Nectar into either Mixing mode or Tracking mode. In Mixing mode, all modules are available and produce the highest quality sound, which uses more CPU power. Tracking mode limits the operation of some modules in exchange for a lighter CPU hit and near-zero latency processing.