Radio managers get an NAB show twice a year. Engineers get their regional SBE conferences. Deejays and on-air talent get their boot-camps and Dan O’Day weekends. Wouldn’t it be just the best if radio production people had their own trade show, to go and check out new equipment and software?

The AES convention is for all audio pros, and it is not uncommon for familiar faces from the music industry to show up – Alan Parsons, Phil Ramone, Mickey Hart and Stevie Wonder have been spotted in recent times – so as such, it is not a radio-specific event. But audio is audio, and if you earn your living making commercials, promos and long-form programs, or use your genius to make radio remotes sound good, this is a trade show you would definitely get a lot out of.

Where else are you going to get your hands on the newest microphones, see the latest version of Pro Tools, touch and tweak massive mixing boards and raise hell with the newest Harmonizer technology?

If you don’t need or want to listen to sessions or white paper presentations, a pass to just the Exhibit Hall (where all the fun is) is free. And if you are in radio, free is a nice word to hear. 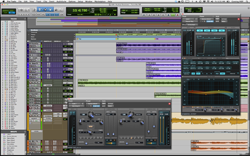 Since I mentioned Pro Tools, I’ll start with them. Parent company AVID was hard to miss, with one of the biggest booths on the floor and showing off Pro Tools 10. The new version includes Clip Gain, which separates pre-mix levels from mixing automation, so all clips start out at the same level. If your eye is on the big HD 10 version, the dedicated HDX cards can handle 256 audio tracks per card – way more than you’ll ever need for radio production. 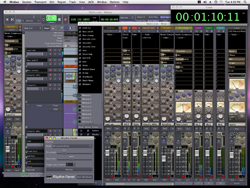 Console maker Harrison had a small booth with an interesting DAW: Mixbus. The company overlaid a virtual Harrison mixer on top of “Ardour”, an audio workstation created under Linux, and made it sound like an actual Harrison console. Priced at $150, Mixbus might appeal to Mac fans lacking the money to swing a big Pro Tools rig, and Linux-heads will find it works fine under their favorite free distro. A Windows version is in development, but is nowhere near ready.

Samplitude has been part of the Magix product line for a while. Samplitude Pro-X is the latest version, offering some heavy MIDI functions and a pile of functional and handy plug-ins.

To my disappointment, Sony and Adobe were not showing at this year’s convention, which meant nothing new on the order of Vegas, Sound Forge, or Audition; all well-known audio editors used in radio production.

However, some Sony products were being shown by Shoreview Distribution, including the very cool PCM-D50 handheld stereo recorder, capable of capturing nearly 13 hours of 22.05 kHz audio in WAV format, and with a pair of flexible built-in X-Y mics.

TASCAM was equally tricked out with portable Flash-type recorders, including the insanely affordable ($100) DR-05, with a built-in guitar tuner. TASCAM also has a line of portable 4- and 8-track recorders – the DP-004 and DP-008 – if your production tasks include recording that band at your station function for later playback.

Similar field-type multitrack recorders were also seen at the Sound Devices and JoeCo booths, although those were more appropriate for film or TV audio acquisition.

Much of today’s more elaborate radio production is being done “inside the box”, where processing and effects are performed in software, rather than shunted out to an effects unit in the rack and mixed back in. Plug-ins for popular DAW suites perform this feat, and there were lots of them at the show.

Izotope – maker of the very cool “Vinyl” free plug-in – was out in full force showing a suite of stunning processing modules, including the RX2 audio repair environment, the Ozone 5 complete mastering system, and “The T-Pain Effect”, which does exactly what the name says.

The BIAS Master Perfection Suite takes care of that last pass before hitting the air or that demo CD, with the included Sqweez multiband limiter/compressor and GateEx downward expander. 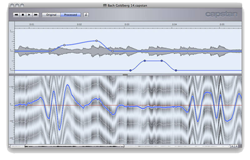 Celemony rolled out what has to be one of the greatest plug-ins ever: Capstan, which analyzes audio from crappy cassettes or off-center phonograph recordings made on inferior or badly-maintained gear, and removes the wow and flutter. All those old station archival recordings (or your early airchecks) can be cleaned up and corrected, with all that nasty flat-idler wheel sound removed. Very cool.

Equally cool is the NML RevCon-RR from Tac System. Ever have a recording, maybe from an intern’s camcorder, full of off-axis echo, reverb and room noise? This plug-in basically de-reverbs the recording, making it sound as if the mic is closer to the subject.

Of course, there is always the need for outboard processing, which means there will always be room in the rack for a real live Eventide Harmonizer. The current model H8000FW brings back all the favorite sounds (CB Radio, Airplane), lots of new ones and sample rates up to 96 kHz. In more compact packages, Eventide also had the 24-bit Reverb 2016, the Eclipse multi-effects processor, and a wild collection of guitar stomp boxes (years ago, before I could afford a Yamaha SPX-90, I used to plug my mic into my guitar effects to get the sound I wanted. I still like them).

Production music and effects folks were in short order this show, but Sound Ideas still made it. And the company brought with it the MegaMix music collection with almost 7,000 music tracks and about 2,800 production elements; and the hi-def General HD effects collection with 25,000 all-new 24/96 recordings. Delivered on hard drive, the General is a screamer.

Microphones are where it’s at for production people. And while the overwhelming studio favorite remains the Electro-Voice RE-20, the E-V people were nowhere to be seen at the AES show. Which is fine; I’ve always thought the RE-20, with its exaggerated bass response, was too thumpy and dull for my ear. Today’s digital production calls for clear, transparent and accurate voice recording, so I had an excuse to go digging for cooler, more modern microphones.

I knew ribbon mics had made a comeback, but I was surprised to see how many companies had ribbon models on the floor. At one time, these were fragile and delicate mics to own and use, but new manufacturing techniques and materials technology have made these a viable contender to the standard dynamic units found in most radio studios.

Audio Engineering Associates (AEA) were the guys that brought the ribbon back a few years ago. They were in New York to show off the passive R44 mic and the active A840, both just screaming retro vibe. And looking much like an RCA mic right out of Radio City circa 1940, MXL’s R77 was a shiny sight to behold.

Shure came to the show with the pricey but stunning KSM313 ($1,619) and KSM353 ($3,369) ribbons mics. The 353’s shockmount did away with rubber bands and elastic suspenders and went with a masculine wire-rope affair … like a boss.

Major props to Audio-Technica for providing affordable condenser mics over the years to even the lowliest production dudes (the $169 AT2020 comes to mind). The company went down the Ribbon Road as well with the outstanding AT4080 and 4081 mics.

Most likely based on tradition as well as the mic’s construction, ribbon units typically have a figure-of-eight response. If directionality and sensitivity is paramount for you, then a condenser mic is the way to go. And funny how, even in the 21st Century where we want precision and clarity in our recordings, old-school tube mics are still a preferred favorite.

So to satisfy your tube condenser fix, consider the Mojave Audio MA-200 and MA-300 models with military grade JAN 5840 tubes; the Telefunken U47/U48 with its scary $8,000 price tag or the new CU-29 Copperhead mic at $1,295; maybe the Miktek CV4, with nine selectable patterns; or Lauten Audio’sOceanus LT-381, claimed to produce “full and detailed recordings”.

Tube mics may be a little too delicate for the production room, so consider a few FET condenser mics instead; like the AKG C414 XLS and XLII mics, with their nine pickup patterns; the Charter Oak S700 which could visually pass for an RE-20; the M 1030 from Microtech Gefell, with a nice airy bump from 6 to about 14 kHz; as well as offerings from many of the companies already mentioned. 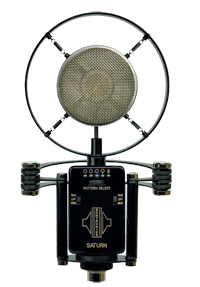 Among some of the wackier-looking mics this year were the Studio Projects LSM (“Little Square Mic”), looking for all the world like an electric shaver; the Cascade Knuckle Head condenser, resembling a 1920s carbon-button mic on springs; and the Sontronics Saturn, which – how do I say this? – imagine that 1920s vibe meeting the Jetsons, with a little “Swedish washing machine” thrown in. Easily the rockingest mic on the floor.

And then there is the Earthworks precision QTC50, which resembled something a doctor would stick in your ear. I wish my ear were this sensitive – the QTC50 has a claimed frequency response of up to 50 kHz, or nearly two octaves above what most of us can hear. This mic could probably pick up hummingbird farts.

Okay, so maybe the AES convention isn’t a show by production nuts, for production nuts. But in the end it’s all about the audio, whether for radio or not. And you’d be hard-pressed to find any other convention that has this many cool and amazing audio tools and toys in one place.

Next fall’s show is in the Moscone Center in San Francisco, and the AES will cycle back to New York in 2013. I hope you can make it.

March 01, 2004 8980
by Steve Cunningham Reverb is one of the cool tools of production. Everyone has a favorite model of reverb, and perhaps several of them. They serve to create the illusion of space, they can warm up dry tracks, and occasionally...
Read More...
© 1988 - 2022 Radio And Production, LLC
Go to Top