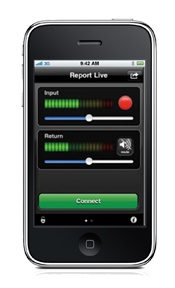 ► Tieline Technology announces the release of a new free version of its award winning iPhone “live on location” audio codec application called Report-IT Lite. Now available on the iTunes App store, this new free version allows iPhone owners to use many of the features of the full Report-IT version and understand how it can be usefully deployed within their network. International Marketing Manager, Darren Levy said “We made a free version of the app available to help people answer many questions on the performance of the iPhone as a broadcast tool. Many customers have been surprised to learn that the iPhone’s in-built microphone delivers robust FM quality mono audio compared with most other phones on the market. Also, because Apple have a very strict policy for testing apps before they are allowed to run on the phone the platform is extremely stable for live broadcast, local recording, editing and FTP file transfer”, said Levy. The company has made free test lines available so that users can connect live to a Tieline hardware studio codec to learn how it works. Users can also request free Tieline hardware codecs for their studios to conduct more comprehensive tests. One feature available in Report-It which has caught the attention of several major networks is the ability to email or SMS a “launch and connect” pre-configured link to a non-technical Reporter’s iPhone. The Reporter touches the link in the email or SMS and it automatically launches Report-IT and connects to the studio live over 3GIP or WiFi. “This feature is a game changer for studio engineers who have non technical reporting staff or even remote talent who happen to have an iPhone”, said Levy. www.tieline.com.

► Adobe announced that Adobe Audition, the all-in-one professional audio toolset for recording, mixing, editing and mastering, is coming to the Mac in a future release. A beta of Audition for Mac is expected to be available on Adobe Labs in Winter 2010. Mac users can sign up to be notified when the Audition beta is available. All of the currently available capabilities are planned to come to Mac users in the next release of Adobe’s comprehensive professional audio editing tool. Key innovations in Adobe Audition for Mac include: Native multi-channel support for 5.1 surround sound for professional results; Noise reduction and restoration capabilities; New audio effects, including de-hummer, de-esser, and volume leveler. www.adobe.com. 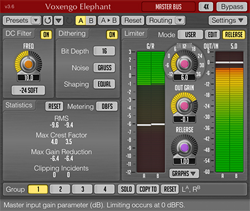 ► Plug-in designer Softube, a.k.a. the boys from Linköping, announced the release of their latest opus, the Tube-Tech PE 1C equalizer. Designed in concert with Tube-Tech/Lydkraft, the plug-in is a detailed model of the hardware EQ that literally launched Tube-Tech as a company in the mid-1980s. That EQ, the PE 1A, was based on the Pultec equalizers first popularized in the 1950s; 25 years later, the hardware PE 1C (a refined version of the original PE 1A) remains a cornerstone of the Tube-Tech product line. Now, thanks to Softube’s patented modeling technology, DAW-based recording musicians can enjoy the unique sound and feature set of the PE 1C at a fraction of the hardware’s cost. Passive in design, the PE 1C is noted for its smooth, open, and airy top end--just the thing for vocals and guitars. The low end section comprises two independent filters--one for cut and one for boost--whose frequencies are slightly offset. This allows users to easily dial in the signature Pultec “scoop” sound, most frequently used for kick drums. Softube rounded out the plug-in design with a few of their own features, including output gain control and stereo operation. www.softube.com.

► Mackie announces two new mid-format analog consoles, each featuring dual internal FX processors, dedicated compression and 4-track recording via USB – the 24-channel 2404-VLZ3 and 32-channel 3204-VLZ3. Mackie VLZ3 4-Bus Premium FX Mixers with USB deliver proven, professional sound quality and performance in an ultra-compact and rugged design with the channel count needed for SR applications. The Mackie 2404-VLZ3 and 3204-VLZ3 feature low-noise, high-headroom XDR2™ mic channels (20 and 28, respectively) and two dedicated channels for stereo inputs. Inline compression is available on each of the four subgroups and on four select channels. Dual 32-bit RMFX™ effects processors offer 16 extremely useable presets, including tap delay. The integrated 4x2 USB interface offers multiple routing options to a DAW, with a convenient stereo return that’s assignable to the mains for background music or into a channel strip for mix integration. With the smallest footprint in their class and legendary Mackie rugged design, VLZ3 4-Bus mixers are perfect for often cramped FOH areas or portable applications. The 2404-VLZ3 has a U.S. MSRP of $1349.99. The 3204-VLZ3 is $1,699.99.

Also new fromMackie, two new premium recording interfaces, additions to the popular Onyx family — the Onyx Blackjack and Onyx Blackbird. These new interfaces combine the sonic benefits of Mackie’s proven Onyx mic preamps with high-end Cirrus Logic® AD/DA converters and workflow-friendly features that are perfect for people starting or expanding upon their studio. The Onyx Blackjack is an ultra-compact desktop 2x2 USB interface, perfect for the home studio. It features two acclaimed Onyx mic preamp channels, each featuring built-in DIs for connecting guitars, etc. Separate level control for studio monitors and headphones, along with true analog hardware monitoring take the guesswork out of zero-latency recording. It is bus-powered, with a rugged, ergonomic chassis perfect for both portable and home studio applications. The rackmount Onyx Blackbird delivers studio-grade recording via eight Onyx mic preamps. A 16x16 FireWire interface, Blackbird also features 8x8 ADAT and wordclock I/O, providing ultimate expandability. There are two “Super Channels” on the front panel with dedicated low-cut switches, phantom power and true hardware monitoring options for quick zero-latency tracking. The other channels are equally flexible, utilizing the powerful Blackbird Control DSP Matrix Mixer for quick setup of independent mixes and the ability to route any input to any output. Monitor, main, alt and dual headphone outs with dedicated source selection and level control ensures there are plenty of mix routing options. The Onyx Blackjack and Onyx Blackbird are Mac/PC compatible, work with most major DAWs and include Tracktion 3 Music Production Software. The Onyx Blackjack has a U.S. MSRP of $259.99. The Onyx Blackbird has a U.S. MSRP of $629.99.  www.mackie.com.

► The lives of recording and live sound engineers got a little easier with the release of Softube’s new Tonelux Tilt EQ plug-in (Mac/PC; VST/AU/RTAS/TDM/VENUE formats). Modeled after Tonelux’s original hardware EQ, first featured in their MP1a mic preamp, the Tilt EQ plug-in provides a fast and easy way to rebalance the frequencies of an entire track. Thanks to the equalizer’s unique “tilt” design, which allows simultaneous adjustment of low and high frequencies, a recorded track, live instrument, or entire mix can be taken from bright and shimmering to warm and wide (and back again) with a simple turn of the dial. In live performance, adjustments can be quickly made without introducing feedback or unwanted volume changes. A fully functional 20-day trial version can be downloaded at www.softube.com.

► Blue Cat Audio, known for their precise Audio Analysis Tools and their Audio Signal Processors are proud to announce that all of their professional plug-ins have been ported to the ProTools RTAS format and are from now on fully compatible with all 64-bit OS systems and major host applications. Blue Cat Audio is a privately held company based in the western suburbs of Paris (France). It has been founded by Guillaume Jeulin, musician, software engineer and audio fanatic. Blue Cat Audio focuses on providing flexible and yet powerful audio tools for musicians and audio professionals. www.bluecataudio.com. ►

► Traffic Jams is a specialized music site, tailoring themes to your station’s traffic reports. New traffic themes include: Tacho, which holds a bass line steady, with a jabbing, cheeky, flanged guitar signature; Transit Lane, ideal for mid-break updates in news windows; and Alarmco, which continues Traffic Jams’ goal of producing cross-format themes, purposeful and easily accessible to most genres and listener targets. All themes are free to download and use on your next traffic update. The themes are original compositions with integrated traffic sound effects to add an extra dimension to your traffic updates. While free to use, you are asked to report their usage on your periodical performance return, as you would with any other material you might use. File information for reporting purposes is embedded in the mp3 download and watermarked for digital use. www.trafficjams.com.au.

► Australian radio software company Radio WorkFlow have announced their new “One Click Outsourcing” option is now available on all new and existing Australian and New Zealand systems. “OutFlow” is a new tool, affiliated with one of Australia’s most respected and dependable voice over and production houses, Abe’s Audio. “OutFlow” allows Radio WorkFlow users to effortlessly direct individual scripts off-site for voicing, production (or both) with no need for calls, faxes, emails or lengthy explanations. The new functionality is a big winner for stations who incur unexpected absenteeism in their creative and production departments, or networks looking to restructure their redundancy staffing allocation. Users now enjoy the flexibility of having the entire Abe’s Audio’s production and voice team on standby. The new 1-click service extends beyond just voicing and production with the launch of ScriptFactory.com.au - the latest venture from Abe’s Audio, creating an additional outsourcing option that allows stations or networks low on creative resources to outsource their script writing as well. Briefs are electronically lodged to Script Factory with just 1 click and the completed scripts are then ingested back into the stations local Radio WorkFlow system as if they were written on site. For more information contact Vaughan Jones. , www.radioworkflow.com. ▲

March 01, 2013 6831
by Steve Cunningham As this column has recently noted, voice actors seem to have taken to the Macintosh platform of late, particularly the still-sleek MacBook (formerly known as the MacBook Pro). Recently the menu of available...
Read More...
© 1988 - 2022 Radio And Production, LLC
Go to Top