Many if not most of us are still running Windows XP, either Service Pack 2 or Service Pack 3. Windows XP is still an effective and robust operating system, and has the additional advantage of running on older and slower CPUs. But it has three distinct disadvantages. Number one -- XP lacks most of the modern security features contained within Windows 7. For a PC running Windows XP on the Internet, especially if you’re using Internet Explorer, it can be a dangerous world out there (see the sidebar for more). Number two -- I fully expect new versions of audio software from Sony, Adobe, and others, will want to take advantage of Windows 7’s 64-bit performance. Number three -- you have to remember that XP was introduced in 2001, and has been officially discontinued. The 64-bit version of XP, known as x64, is no longer supported at all. Microsoft’s Extended Support of XP SP2 ends this July, and SP3 ends in April 2014.

“But wait,” you say, “We still have Vista, right?” Well yes, we do, although many of us in the production community simply took a pass on that operating system. It is probably not necessary here to re-hash the entire Vista saga. Suffice it to say that Windows Vista was not the success Microsoft would have liked; for audio editing most users avoided the upgrade altogether, including me. Microsoft itself admits that Windows Vista achieved just slightly more than 10% share of the total Windows market... hardly a successful release. Microsoft has over the past two years fixed many of the most egregious problems in updates, and vendors updated both hardware and software drivers until they were glitch-free. But most of us have simply stuck with XP, and waited for Windows 7. The wait ended last fall, and five months later it may be time to ask the $64 question: is it time to upgrade to Windows 7?

Windows 7 was released to the world officially on October 22, 2009.

Both Microsoft and the pundits dubbed it “what Vista should have been in the first place.” Initial reports from audio engineers in the field, along with my own experiences, indicate that Microsoft got it right this time. Windows 7 finally delivers on the stability and performance that users hoped for from Vista.

The basic requirements for Windows 7 are somewhat misleading. Microsoft says that all you need is an Intel processor running at a clock speed of at least 1 GHz, and about 2 GB of RAM. You’ll also need a DirectX 9 graphics device with WDDM 1.0 or higher driver, and somewhere between 16 and 20 GB of hard disk space (depending on whether you install the 32-bit or the 64-bit version). But it’s unlikely that you’re going to be happy with the performance of a Pentium-class CPU at any clock speed. Windows 7 shrieks for an Intel core 2 processor at minimum, and 4 GB of RAM. If you happen to be fortunate enough to own an i5 or i7-based Intel box, then Windows 7 will definitely put you in happy land. But first you have to decide if you’re going all the way to 64 bits.

Unfortunately very little of the audio software that we use supported 64-bit Vista -- developers were loath to create a 64-bit version for an operating system that wasn’t selling well.

With Windows 7, Microsoft has offered us both a customary 32-bit version that will work with our existing software, along with a 64-bit version that has one substantial advantage -- the ability to address massive amounts of RAM (Random Access Memory). A 32-bit version of Windows supports up to 4 GB of RAM, although in practice less than 3.5 GB are actually available for use. Moving to a 64-bit Windows operating system lifts this restriction, and potentially supports up to a whopping 192 GB of RAM.

What do you get for the extra RAM? For most users, the benefit is the ability to run more programs simultaneously. For radio production folks, you’ll find that you can load up more plug-ins overall. In general, most users will notice an increase in speed of 10 to 15% moving from a 32-bit OS to a 64-bit OS with the extra RAM.

Of the six versions of Windows 7 published by Microsoft, just two will be of use to radio production types. The 64-bit version of Windows Home Premium supports multiple “cores” on a single CPU, and up to 16 GB of RAM, which should be enough for anyone (including Dave Foxx -- hi Dave!). The Windows 7 Professional version supports multiple CPUs, each of which can have more than one “core,” along with the aforementioned ridiculous 192 GB of RAM.

This is where the rubber truly meets the road, particularly if you’ve chosen to go to 64 bits. The good news is that most popular audio editors are now Windows 7 64-bit certified. The list includes the most current versions of Sony Sound Forge 10, Vegas 9, Adobe Audition 3, and even Cocko’s Reaper. Digidesign has just released version 8.0.3 for ProTools (including HD, LE, and M-powered), which is a Windows 7 beta. Unfortunately, ProTools remains strictly a 32-bit application, and no date has been announced for a 64-bit version.

Native plug-ins that ship with the aforementioned editor software work just fine in 64-bit mode, as you might expect. But third-party plug- ins are a more troublesome matter. Version 7 of Waves’ plug-ins work under Windows 7, but are 32-bit only. At this time there are very few 64-bit VST plug-ins, since few developers can justify spending the time needed to perfect new 64-bit releases that will sound identical to the 32-bit versions. It is more likely that 64-bit versions of VST plug-ins will be released as part of major paid version upgrades. As a workaround, a few developers have developed “wrapper” software that should allow many 32-bit plug-ins to function properly in a 64-bit audio host program and operating system.

One mustn’t forget that 64-bit drivers will also be necessary for computer peripherals, including printers, scanners, and even some CD burners. Before you decide to go for the 64-bit enchilada, it would be wise to check and make sure there is a 64-bit driver for your combination printer/scanner/fax machine.

But even with all of those caveats, Windows 7 provides some real benefits. As more and more software audio editors tweak their multithreading code, allowing them to perform more operations in parallel, the benefit of Windows 7’s improved multithreading performance will shine through. In addition, Microsoft has fixed some long-standing problems for which Vista became notorious. For example, there are far fewer user prompts, giving you some control over how often Windows nags you. By default Windows 7 runs far fewer background tasks then did Vista, which means better performance from mid-level computers. They’ve even included FireWire 800 support, although at this time it’s necessary to drop back to a 32-bit driver to make it go. And finally, check this out: Windows 7 natively supports Apple’s QuickTime .MOV and H.264 file formats. You don’t have to install QuickTime in order to play QuickTime movies or audio files. 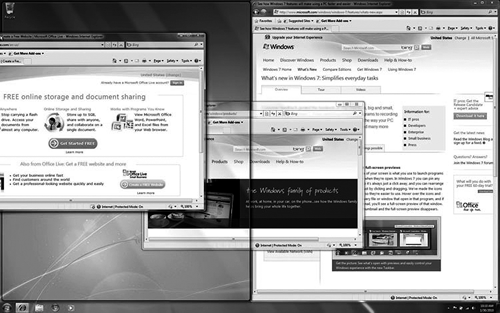 The process of optimizing Windows 7 for audio use differs little from the process used on previous versions. Basic optimization can be accomplished in five steps:

Step one: Set your computer’s power for high performance, rather than trying to conserve energy. You want your CPU to run at full speed all of the time. From the Windows Control Panel, select Power Options. Choose the High Performance setting, and click the “Change Plan Settings” button. Make sure both power options are set to “Never.”

Step two: Disable system sounds. Since system sounds can interrupt audio you want to ensure that they are disabled. Go to the Control Panel and select “Sound.” Go to the Sounds tab, and under sounds scheme select “No Sounds.” Click “Apply,” then “OK” to set the preference.

Step three: Enable DMA (Direct Memory Access) on each IDE channel. Enabling DMA allows data to be transferred directly from your hard drives into memory, and can improve audio performance. To accomplish this, open the Device Manager. Expand the IDE ATA/ATAPI controllers category, then double-click on each one of the IDE channels. Under the “Advanced Settings” tab, make sure the “Enable DMA” box is checked in Device Properties. Note that this procedure may not apply to all hardware, and if this option is not available don’t stress about completing the step.

Step five: Disable Windows firewall, antivirus, and spyware software. These should all be disabled to ensure that no interferences occur during audio recording or playback, and to ensure that maximum resources are available. To remain secure while your firewall and antivirus are disabled, it’s a good idea to temporarily disconnect from any Internet connections. Just unplug it for now, plug it in again later.

If the above doesn’t pump up the volume for you sufficiently, you may want to go in and disable some of the visual effects. From the Start menu, do a search for SystemPropertiesPerformance and press Enter.

When you see the Visual Effects tab, select “Custom.” Then uncheck the “Animate windows” to eliminate the windows’ zoom effect. Press “OK” to confirm. You can experiment with disabling other visual effects as well, to wring the maximum performance out of your computer. It may not make pretty, but it will make faster.

TO UPGRADE OR NOT TO UPGRADE?

The answer to that question truly depends upon how happy you are with your current version of Windows. In short, if you’re happy with Windows XP then please continue using it. Keep in mind that the upgrade process will probably involve some pain and a fair amount of time. Windows 7 is best installed on an absolutely clean hard drive, which means you will need to reinstall and reauthorize software in the end. And you will spend the better part of the day doing all of that. But so far, for me, it’s been well worth it.

Since my current PC has a single processor with two cores, I’ve settled on Windows 7 Home Premium Edition and am quite happy with it.

When Digidesign finally releases a 64-bit version of ProTools, my life will be complete. But in the meantime, I’m enjoying using Forge and Audition more than at any time I can recall.

If you’ve read this far, you are likely a computer user who knows that the Internet has become a more dangerous place than ever with regards to malware, including viruses, Trojans, and keyloggers. Security experts are now discovering malware on the Internet that is purposefully designed to steal bank account information and passwords from businesses and individuals, with an eye towards emptying their accounts. The American Banking Association recently advised its members and their business clients that they should dedicate a separate computer for performing online banking transactions and for nothing else, and that the computer should be taken off the Internet entirely when not performing that specific task.

While I haven’t had a great deal of time to evaluate it, I can tell you that it appears to be both small and lightweight in terms of CPU usage, and I expect that because it’s from Microsoft it will integrate properly with Windows and won’t be in my way. And because it’s free, it won’t be bouncing icons in my taskbar telling me that it’s time to re-up my license. In full scan mode it is painfully slow, and it spends a lot of time when analyzing EXE and DLL files. I’m hoping that means it’s being thorough, but once the full scan is done it appears to check new things coming in incrementally, which helps.