Technology: The Year of the Penguin - Part Two 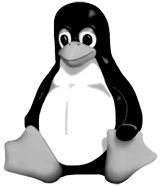 Last issue, I presented some background on myself (the non-audio-guy side), and did a quick poke at Microsoft’s Windows and Apple’s OSX.

And, I hope I made it clear that this isn’t an “Us versus Them” thing. The one thing that has to be kept in mind is that you use the computer system that works best for you.

As a businessman, my first interest is keeping my customers happy. Happy customers mean cash flow. What I do with the cash flow is my second business interest.

As a sole proprietor, I don’t have to worry too much about licensing issues with software. I buy the computer; it comes with Windows or OSX and the license fee is included in the price. If I buy software, I buy the license to use it along with the physical media, like a disk or a download, also for the purchase price.

But, say I want to equip everyone in my production guild with the same piece of software so we all have exact compatibility. I may only need to buy the physical media once, and install it across the network – but I have to buy a license for every machine. That can get hugely expensive.

A company putting a copy of an office suite across thousands of machines will pay a lot of money for the license to use it on each one. And, if the company wants to modify the software for any reason – they can’t. The license doesn’t permit it.

This simple bit of copyright protection brings us to Open Source.

Open Source is often a collaborative project. For example: I write an application that automatically backs up my computer once an hour. I put it out to the world for anyone to use. It’s downloaded, and a smart person realizes that what I wrote in 100 lines of code, could be written in 80, and an additional feature could be added without breaking the integrity (causing a crash) of my original program. Then, they release it back to the world. The software may get better over time. More tightly written, additional features, and be “ported,” so it can run on many kinds of operating systems. During all this, a FAQ and help file may be developed – by yet someone else.

Or, I may end up doing all of the above myself and ask people for a donation to help cover costs.

One of the key departures of Open Source is support. For many pieces of commercial software, support on use or troubleshooting is often a toll free telephone call away. After a time, you may have to pay a fee for tech support.

Open Source is for the most part a DIY support. For most Open Source products, there is very often a community discussion board where problems can be brought forth and solved. You do have to put a little bit of cerebral wattage to use with Open Source, but in the long run, I feel it makes the user more capable with the software, and more likely to be able to solve the next problem yourself.

For a while, Open Source was looked on as inferior software. And, for a while, it may have been. In recent years though, quite a bit of commercial grade software has been developed and published. This is very important when considering Linux as a contender for your workstation.

I want to say that again so it is clear: Even though most all of the software you can use under Linux (including Linux) is free to obtain, you do not get a second-class product by any means.

Some software is still in a growth phase, others have already had multiple major releases. Perhaps the best known Open Source project is OpenOffice.org, or “OOo.” A number of major corporations have brought development and funding to OOo, and the result is an Office suite that can, and does, rival Microsoft’s ubiquitous Office Suite. There is an excellent online support and community structure should you have any kind of issues, and at the top of the “gotta have it” list is the cost – zero. The software is free. The licensing to use it is free.

If you want commercial help ticket type of support, you can pay for it. In fact, this is how a lot of companies make their money, by offering an optional pay support system.

Let’s work with the assumption that you have three computers at your SOHO (small office, home office): a primary desktop, a secondary desktop, and a laptop. You can put the Open Source office suite on all three for no cost other than the download, or you can shell out hundreds of dollars.

What about another well used application, PhotoShop? The Open Source equivalent – and I mean equivalent, not inferior – is The GiMP.

Want to do 3D modeling? Go nodehappy with Blender.

Adobe Acrobat? There really is no onestop replacement, but you can use two apps to scan, save, combine, split, etc., PDF documents – XSane and PDFSam. OOo will export PDF’s natively, so you don’t need the separate printer driver for Acrobat, but Linux distro’s come with one anyway (CUPS:PDF) to allow you to natively print PDF’s from any application. In short, you’re covered.

Audio editor? Sorry. This is why I keep the Windows XP machine. There has yet to be developed a fast, versatile power editor like Cool Edit Pro 2.1, and it’s successor, Adobe Audition. Audacity is a very good Open Source editor, but it’s not in the same class as CEP/Audition.

High-end gaming? Hit and miss. More miss than hit. Some games do great, some don’t run at all. I’m not a gamer, so hit the web for opinions.

Here’s an additional point, and then we’ll wrap up this topic until next time: Much Open Source software is OS independent -- meaning you can run the same application or utility on Windows, OSX, and Linux. OpenOffice.org is one of those. So is Thunderbird, Firefox, Opera, Skype, VLC player and countless others.

With OOo running on my three different OS platforms, my files are still completely interchangeable, and I can read and write to dozens of different document, spreadsheet, presentation, and drawing formats. The software is updated often enough that I rarely, rarely run across a document I can’t open.

The bulk of daily personal computer chores are the easiest to migrate to, and because of Open Source, your migration is almost effortless. Consider casual use: Email, web browsing, calendar, document/spreadsheet, photo/picture viewing, and music/video. There are many choices, but off the top of my head: Thunderbird, Firefox, Sunbird, OpenOffice.org, gThumbs, VLC (VideoLAN) -- all free, all Open Source, all included as part of the installation with most Linux distributions.

Bottom line: You will not sacrifice quality or “user experience” with Open Source software. Sometimes the GUI is different, the buttons may be relocated, and the processes have different but similar names. But the quality of the output – what you create – will be there.

Next up: Distro’s and installation.

Myth: “There are no applications available, and what you can find are amateurish.”

Demythtified: Just for the sake of accuracy, I went into my package manager (the place where you install and remove software) and queried how many applications and support files it had available right now for installation. It kicked back 26,936. Almost 30 thousand applications, utilities, games – you name it, plus the associated support files to make them run on my machine. Now, you may not be able to walk into a computer store and buy Linux applications in a box, off the shelf. But why bother? They’re all free for the download! Some are oneoffs, some are very specific (like pointing a telescope), and the more popular ones – i.e. OpenOffice.org, VLC, GiMP, etc. are as good as if not better than their commercial counterparts.

Andrew Frame is nonmythological human behind the desk at south Florida based talent, creative, and audio post house BAFSoundWorks. He can be reached at studio@bafsoundworks.com or by waving a sub sandwich in front of the window.

January 01, 2002 7521
by Craig Jackman I like compression. I like compression a lot. It’s an effect that makes what I do sound better, although it’s all too easy to overuse. Even though I like compression, I’ve never really been head over heels in...
Read More...
© 1988 - 2023 Radio And Production, LLC
Go to Top