It seems that about every two years Sony releases a new version of Sound Forge. Indeed, it’s been a little over two years since we last looked at Sound Forge version 9. Since the percentage of RAP readers who use Forge on a regular basis is high, I figured you’d want to know about what’s new sooner rather than later.

Here’s the deal in a nutshell -- overall, Sound Forge Pro 10 is all about streamlining the user interface and improving the program’s overall workflow. It’s still the same Sound Forge we’ve known and loved and used for all these years. But menu items have moved, new menus have sprung up, and toolbars have been eliminated or replaced.

In addition, there are some new editing features that may not be revolutionary, but are very new to Sound Forge. Taken together, they kick the entire program up several notches. Sound Forge Pro 10 is to version 9 as a 2010 Ford Mustang is to a 1969 Boss Mustang... still wicked fast, still sounds like business, but so much easier to drive. 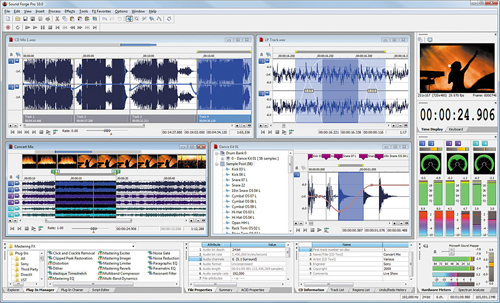 One of the first things you’ll notice is the addition of the word “Pro” to the product name. I seriously doubt that many of us would consider Sound Forge to be a consumer product, but evidently Sony felt that they needed to make a positioning statement to differentiate the consumer product, the $70 list Sound Forge Audio Studio, from the $300 list priced professional product we know and love. So be it.

Installing Forge Pro 10 is as simple as always, and even that is a bit more streamlined. I do like the new splash screen that lets you choose precisely what you want to install by clicking on the appropriate text. For my installation, the program first needed to install Microsoft’s Visual C++ distribution, then got on with the main installation that took but a few minutes. I then installed the Sony Noise Reduction plug, which is updated to version 2.0i. Having finished that, I clicked on the Exit line on the splash screen and was done. Loading the iZotope Mastering Effects 2 bundle was equally as uneventful.

Forge Pro 10’s requirements haven’t changed much. It runs on Windows XP, Service Pack 2 or later, and on Windows Vista Service Pack 2 or later, although there’s no word on Windows 7 as of yet. A 1 GHz processor is minimum, along with a half a gigabyte of RAM and 300 MB of hard disk space for the program. You’ll want more than that of course; a nice Core 2 Duo running at 2 GHz or better, with 2 or 3 GB of RAM, will make a nice platform for Forge. As always, the product is available either boxed and shipped, or downloadable. I opted for the latter, since the product manual comes as a PDF file anyway. Besides, why wait you can have it right now?

Forge Pro 10 maintains its predecessor’s capabilities of recording at up to 24 bits of resolution, storing the audio internally at 32 bits, at sample rates up to 192 kHz. The marketing materials for Forge Pro 10 are clearer than those issued for Forge 9 when it comes to multichannel operation. Sony has now made clear that the multichannel work you can do with Forge Pro 10 is really designed for surround, as opposed to discrete tracks of mono. Still, most of us will continue to use Forge for basic mono and stereo recording and editing, and the changes they’ve made in workflows and menu make that sort of basic operation far simpler, once you become accustomed to the new layout of things.

November 01, 2003 10597
By Steve Cunningham There are good reasons to use a standalone digital mixer instead of mixing with a mouse. The obvious benefits are real faders and knobs, easy monitoring with near-zero latency, and the ability to control your...
Read More...
© 1988 - 2022 Radio And Production, LLC
Go to Top