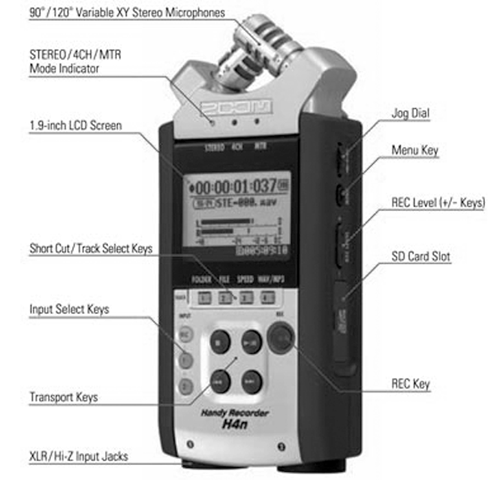 A TRIPOD AND A MIXER

The rear panel is home to a small speaker. Of course the little speaker isn’t for serious monitoring, but it’s a useful addition that brings the Zoom into line with the competition. It means you don’t always need to use headphones or external speakers to ensure that things are operating as they should, or to locate a specific track or location within a track. On the other hand, I love the idea of a tripod mount, also found on the back panel. I didn’t get the mic stand adapter for it, but I did press a small camera tripod into service to good effect. Very handy indeed. Also on the back is the power connector for the included wall wart adapter, or you can pop in a pair of AA batteries.

On the right side you’ll find the SD card slot, a set of up/down buttons for setting record levels, and a paired jog dial and menu key. The latter are used together to navigate the H4n’s many screens for setup, operation, mixing of the four tracks, and the DSP effects. It’s a reasonable intuitive system that requires only the occasional trip to the manual, and then only when you want to really play with the built-in effects. The left side contains the remote control jack, the USB port for transferring sound files to your computer, and the power switch. Also on the left are the mini-jack that works for both headphones and stereo line-level output, and another pair of up/down buttons to set the playback volume.

The three modes are simpler than they appear, as the difference is that Four-Channel allows simultaneous recording from both the two built-in mics and two external mics at once, while Multi-Track allows you to monitor two recorded tracks while adding two more. In Four-Channel you’ll monitor all four inputs at once, while in Multi-Track you’ll monitor the two recorded tracks and the input of the two new tracks at the same time.

The H4n features a four-track mixer, and as mentioned, the onboard mics and external inputs can be used simultaneously for recording on all four tracks. Because the onboard mics are configured for stereo, your four-track options can seem limited, but you could bypass them using the mini-jack input and a splitter cable for a pair of battery-powered mono mics. Even without this, there are plenty of possibilities. A number of applications are suggested in the detailed manual, and there is more potential. I captured a live seminar with some 60 attendees. During setup I took a feed from the lecturn mic and connected it to the line level input, while the built-in mics were positioned to capture the audience reaction. It sounds a bit strange but it actually worked quite well, particularly during the Q&A portion of the presentation. Who knows? It might even serve as a sort of poor-man’s surround-sound recording, although that’s one option I did not explore.

Putting the H4n into four-track mode is as simple as clicking the menu button, scrolling to “Mode” and clicking, then selecting “4CH” and clicking again. A similar approach is used to set it back to stereo. The “MTR” Multi-Track mode allows you to record mono or stereo sources to each of your four tracks, apply effects to and balance those tracks, and create a stereo bounce. 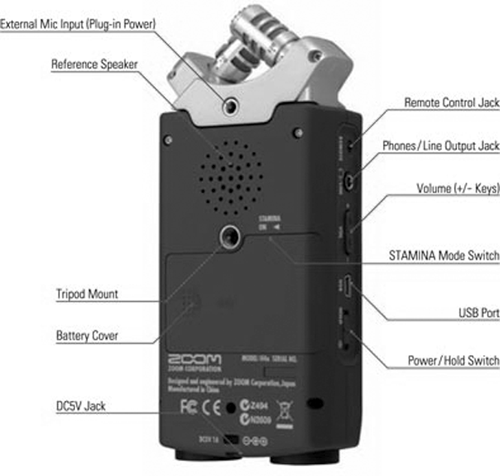 As a bonus, the H4n gives you what is essentially a four-in, two-out, 24-bit, 96kHz-capable audio interface. Zoom includes a copy of Steinberg’s Cubase LE4 software for Mac and PC, which I suppose would provide some entertainment during downtime between manic production sessions. In any case, it wouldn’t be my first choice as a hardware interface (the H4n is, after all, designed with location recording applications in mind) but it’s certainly usable.

Equally usable but somewhat less relevant are the built-in effects and processors. Some of these are truly essential, like the low-cut filter (selectable between 80 and 230 Hz), the compressor/limiter, and normalization, while most are aimed squarely at musicians. In fact, there are some 50 effects taken from Zoom’s various guitar pedal products that will probably provide several minutes of enjoyment before you have to get back to the grind, but even among those there are a few winners for adventurous production types. The delays and reverbs are somewhat lo-fi but still quite a lot of fun, and you can never go wrong with a good ring modulator. Never mind, you can go very wrong with a ring modulator, but there it is.

Consider these things as a big freebie in an otherwise workmanlike portable recorder. Rather than describe them, I recommend you visit their website and download the 158-page PDF manual. It will describe in great detail not only how to get a good recording with the H4n, but also how to engage the automatic wah-wah effect, if that’s what floats your boat. 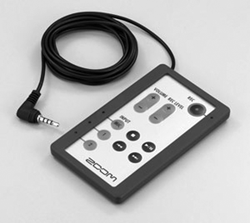 Compared to my FR-2LE, the Zoom H4n is a bit of a fussy beast to set up, primarily due to the screen size and the little buttons located on the sides of the unit. But for basic recording, once it’s set it works as advertised. File transfer time over USB 2.0 is about the same as for every other recorder of its type -- figure one-tenth of the total running time to transfer a file to your computer for further editing or mastering.

Battery life runs at about six hours when recording stereo (again, about the same as the Fostex). The H4n does have a STAMINA mode which allows only recording at 16/44.1, cuts the backlighting, and engages other power-saving functions that raise the battery life to nearly ten hours (there’s no equivalent on the Fostex). But the 2GB file size limit is a drag, and in some ways makes the battery life less important.

Between the two units, the preamps are close in sound. I think the Fostex is a bit more detailed on the high end and a little smoother, but the difference is very minor -- Zoom did get the previous noise problem under control. The built-in condenser mics are not flat, but still quite usable; there’s a bit of a bump in the frequency response around 3-4 kHz and a little rise around 8 kHz that plays as bright, but they’re small electrets so one expects that sort of thing.

At the end of the day, the H4n sounds good, and fits in a coat pocket. It is certainly at the top of the heap for its price (the FR-2LE I’m comparing costs a couple hundred more), and there’s good value there for the money. Steve sez check it out.

The Zoom H4n Handy Recorder carries a suggested US retail price of $609.99, although many retailers advertise it at about $350. It is in stock as of this writing. For more information in the US, visit www.samsontech.com, or worldwide visit www.zoom.co.jp.

April 01, 2008 6831
by Steve Cunningham This month I’ve decided to focus on a couple of software enhancements that significantly speed up my Pro Tools workflow on the Macintosh computer. For those of you on Windows, fear not — I’m putting together...
Read More...
© 1988 - 2022 Radio And Production, LLC
Go to Top