I’ve done a great deal more location recording lately, including a number of interviews that are destined for podcasts. My go-to recorder has been the Compact-Flash-based Fostex FR-2LE (see the November 2007 issue of RAP), and it’s served me quite well connected to nothing fancier than a Heil dynamic mic. During the past Winter NAMM show, I found myself tempted by the all-in-one Flash recorders that come with built-in mics; after all, using one of those would eliminate the need for carrying a loose mic and cable along with the necessary spare batteries. One less item in the carryon bag is always a good thing.

Just prior to NAMM at the last CES show, Zoom introduced an updated version of their H4 Handy Recorder, cleverly dubbed the H4n Handy Recorder. This is not a replacement for the H4, which is still available, but rather a revised version that corrects some of the flaws in the original H4 that made it a less-than-pro product. Chief among these were the noisy external preamps, and the preamps in the H4n are noticeably quieter. And while at $350 on the street, its price slightly higher than its predecessor, the total number of features make it a good value nevertheless. Let’s look at the entire package. 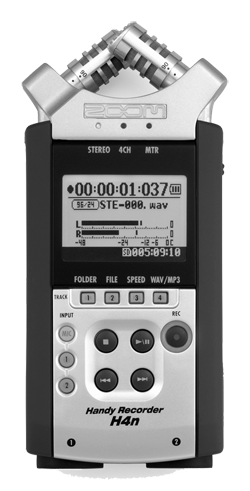 The Zoom H4n is a versatile all-in-one stereo digital recorder with combo 1/4” and XLR inputs, 48V phantom power, an onboard pair of coincident stereo mics and a lot of additional functionality, from four-track mixing to effects and a USB audio interface. In stereo mode, the Zoom H4 records 16-bit or 24-bit WAV files at 44.1 kHz, 48 kHz or 96 kHz. A full range of MP3 bitrates from 48 to 320 kbps are available for stereo recording as well, while in four-track mode the unit records at 16-bit/44.1 kHz. You can record broadcast WAVs, with markers for use when navigating or editing audio files or burning CDs. All this is, of course, recorded to SD card, and a 1GB card is included.

The H4n can take an SD or SDHC card of up to 32GB, although sadly Zoom has not yet broken the 2GB limit per audio file barrier. This puts something of a crimp in my desire to record long-form programs as linear files, since 2GB of stereo is about 3 hours. The unit will not record in a pure mono as will my Fostex FR-2LE, so I can’t use that trick either.

The H4n definitely falls into the hand-held category at roughly 2-7/8” wide, 6-1/8” deep, and 1-3/8” high and weighing in at just over half a pound (about 10 ounces). The body has a thick, rubber-like coating, which makes it less likely to slip from your clutches and take a trip to the floor. The whole device feels solid, better weighted, and altogether professional. If handling noise is an issue, there’s a camera-tripod mount on the rear, and an optional mic-stand adaptor for that. If noise is still a problem, there’s an optional remote control that plugs into the main unit via a mini-jack on the left-hand side panel that helps avoid bumps and thumps from handling when entering record mode. Unfortunately these were out of stock when my unit shipped, so I was unable to get one of these for eval.

While the 2” main screen is similar to that on the H4, the layout of the input controls is very different. Unlike the H4, the H4n has dedicated transport, input- and track-selection controls on the front panel. The four transport buttons are smack in the center of the front panel, with the Record button just to the right. To the left are three input select buttons, while four buttons just below the screen labeled Folder, File, Speed, and Format handle the setup and access chores (and yes, the H4n will playback at half-speed without changing the pitch). Three LEDs just above the screen indicate which of the three recording modes are selected -- Stereo, Four-Channel, or Multi-Track.

More on that later, but the aforementioned four buttons below the screen also double as track select buttons in Multi-Track mode. The recording level and playback volume settings are controlled by dedicated buttons on the right and left panels respectively.

At the top are the two electret condenser microphones. These are by default configured for coincident (that is, XY in the classic crossed pattern) stereo recording, but can be rotated between 90 and 120 degrees to give a wider stereo field at the expense of reduced level in the center. The mic mounting bracket features a mini-jack that let’s you connect a stereo mic, to use instead of the onboard mics. This is intended for a consumer-grade stereo mic, as the H4n provides low-voltage “plug-in power” via this jack, and you cannot use that and the built-in mics simultaneously. The aforementioned combo jacks on the bottom panel allow the connection of external mics or line level sources, and the XLR jacks can deliver 24V or 48V phantom power. The line level jacks are unbalanced. As I mentioned above, the preamps behind these combo jacks in the H4n have been upgraded from the previous version. They’re not high-quality by studio standards, but are they’re perfectly adequate for most purposes, and they lack the annoying hiss of the H4’s preamps.