Like most Sony audio products, Acid 7 can be set up rather quickly. Its copy protection is serial-number based, so there’s no need to find another USB port for a dongle. In fact, the longest portion of the entire process for me was simply downloading the software, which includes several gigabytes of loops and a couple of sample-based soft synths.

Acid’s requirements are in line with most of today’s editors: Windows XP SP2 or Vista, a 1.8 GHz processor with 2 GHz or faster recommended,

1 GB of RAM with 2 GB or more recommended, 150 MB of hard disk for the program and another 8 GB of optional components including loops and software samplers, a Windows-capable sound card, a CDR drive for burning CDs and a DVD drive for reading the program disk. You can, as I did, opt to download all the software. Just be aware that the program is small enough, but downloading 4+ GB of content takes quite a while even on a fast connection.

It’s been so long since we’ve looked at Acid in these pages that the list of changes and improvements would take up more space than this writer is allotted per month. So we’ll just hit the highlights of earlier versions that are applicable to beat matching and production work in general, and focus on the new version.

The most significant improvement is in the user interface, where Sony have added a real Mixing Console window to Acid version 7, as they have done with Forge 9 and Vegas 8. I sincerely hope there was a second monitor for your rig under the Christmas tree, as you’ll need that, along with a dual-head video card. The new Mixing Console window does not replace the current Mixer window, but allows you to see the entire mixer in a single window, which is invaluable for setting up complex bussing schemes, and makes Acid a viable production tool that can take music promos from start to finish.

The new Mixing Console window is home to the same set of controls as the Mixer window shows, including buttons for Properties, Downmixing (from surround to stereo or stereo to mono), Dim Output, and Insert Audio Track/Assignable FX/Bus. In addition, a list down the left-hand side displays all available channels (based on your tracks) with a checkbox to show or hide any or all of them. The show/hide checkbox works on whatever tracks are currently selected, and it’s easy to see at a glance which tracks are not visible. One small quibble is the re-sizeable dividing line between this list and the rest of the Mixing Console display -- I tend to use succinct labels for tracks (which of course become the channel names in the Mixing Console), but the dividing line can’t be moved leftward past a certain point. In my case that point leaves the list about twice as wide as it actually needs to be, and wastes valuable screen real estate in the process. But this is a nit, and only serves as additional motivation for that second monitor, yes?

Between the track list and the Preview channel are two groups of vertical buttons that let you show or hide tracks or functions selectively, with the top button labeled Show All. The upper group lets you hide tracks by their type, while the lower buttons let you hide sections by function. Don’t want to see any buss tracks? Just press the busses button. Pressing the I/O button from the lower group will hide those buttons and extend the meters/faders to fit. You will note that some of the lower function show/hide buttons may not seem to work, depending upon your screen resolution. 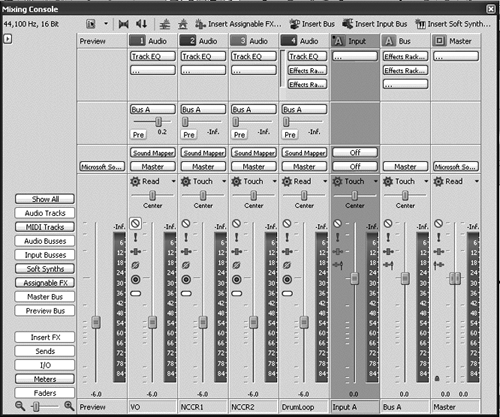 With the Mixing Console Window fully extended vertically and all Show buttons enabled, the mixer shows the aforementioned Properties, Downmixing, etc. buttons along the top, then the Insert FX group, then the Sends group, then the I/O, and finally the Faders with meters alongside. Moreover, the dividing lines between the Insert FX group and the Sends group, and between the Sends group and the I/O group are both moveable with the mouse. You can set up what you see and what you hide to suit your style of workflow and tastes. Very nice.

Additional coolness within the new mixer includes full track envelope automation that works in real time, and can be controlled with either a mouse or an external fader box. Automation envelopes are graphically editable with moveable breakpoints and curves. The automation itself works in Read, Write, Touch, and Latch modes, with the latter two kicking in when you grab a fader and kicking out either when you release the fader (Touch) or when you stop playback (Latch). All the while you can monitor your tracks with real-time track DSP effects, both while in record and in playback.

Also new are input busses, which allow you to record from external devices through effects processors thereby printing them wet, combine external sources with projects in real time, as well as process tracks through external effects. To help you see what’s happening during complex sessions, meters are now available on both audio tracks and busses. These are new meters that can be customized with regard to both position and scale. You can even label your ASIO input and output devices, so you’re not relying on the default names to figure out what is going where. Sweet.

Of course, Acid 7 retains all the functionality of previous releases, including an interface that is extremely easy to use, a Video window for working to picture, windows that can be torn off or docked, and the aforementioned automatic, real-time pitch-shifting and tempo- matching that is as good as it gets.